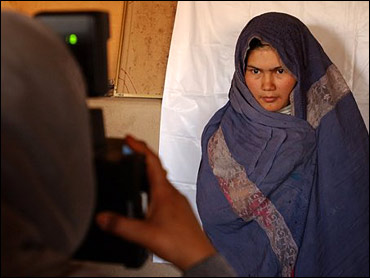 
Our battered cab lurches forward on the bumpy dirt road leading from our guesthouse, and out onto one of the main drags that runs through Kabul city center. My nose is assaulted by the smell of meat grilling at roadside cafes bustling with customers, the bright lights of stores still open late into the night shine through the dark and the traffic is only just starting to ease after another mad rush hour on a typical business day here.

This is not the same city I first encountered the day Taliban forces fled for their lives or tossed their turbans and quickly changed sides, as soldiers from the Northern Alliance marched triumphantly into the capital in early December 2001. That day is burned into my memory forever, as tens of thousands of people thronged around us, grabbing, touching, cheering their first taste of life, free from the reign of terror that dominated the social fabric here for six long years under the Taliban.

Two and a half years later, and many visits in between, I am back in Afghanistan, watching people gear up for the country's first democratic election. There are still few women in the streets, but if you time it just right, you can see the many teachers, professionals and civil servants leaving work for home at the end of the day. Very often, they will be wearing veils, their unmasked faces a stark contrast to the vicious blue knit of the infamous burqua – a long, flowing cloth that still covers many women here, so no part of their person is visible beyond ankles and feet. I say "vicious" deliberately, mindful of the fact that as an outsider, I have a duty to respect the local culture and to try to understand why something so alien to my own Western experience is woven so deeply into Afghan traditions.

Educated, liberated Afghan women have told me that foreigners place too much emphasis on the burqua and fail to understand much more profound issues of equality between men and women. That is easy to accept – much harder to accept is the fact that around 90 percent of Afghan men still beat their wives. And that came from a woman who really should know: Habiba Sarabi is currently the Minister of Women's Affairs and a proud voice for women's rights in a country completely dominated by men.

She also told me that many men refer to women as "my goat" because they are seen as domestic animals, especially in the countryside. A quarter of Afghan children die before the age of one and maternal mortality stands at one dead for every 12 women, largely because maternal medical care barely exists in this country. Many men still do not allow their women to be treated by male doctors – often a death sentence in a country that has extremely few female doctors.

Ironically, the Afghan president's wife is a doctor – a qualified gynecologist who, for the moment, is no longer practicing. She, and other women like, Masouda Jalal, who is the only female running for president in the upcoming election, are a beacon of hope to young Afghan women in cities like Kabul where the possibility of life beyond domestic servitude actually exists, as slim and fragile as that may be.

This did not exist when the Taliban were in power, nor did the thousands of beauty parlors that are scattered across Kabul, and the bridal stores and the local cinema or ice cream shops.

And when Masouda Jalal handed in her application to campaign for the presidency, instead of the required 10,000 signatures she had to have, she submitted 55,000, including many belonging to men. Who would have thought this possible in a country where millions of women still live as prisoners in the homes of their husbands or fathers, particularly in the vast and remote rural areas where they are rarely, if ever, allowed outside?

That is a mark of how much has changed here in the past few years. Real, tangible change that has seen the birth of a new national army that for the first time in this country's history actually has a non-commissioned officers corps, thousands of police and army are being deployed across the country and it will come down to these Afghan men, along with U.S. and coalition forces, to ensure security so millions of men and women can go to the polls in October.

So far, more than 90 percent of the electorate have registered to vote and voter registration cards have become something of a status symbol among many Afghans, even in parts of the country that still harbor remnants of the Taliban and their Al Qaeda allies.

In Khost province, the spiritual home of al Qaeda in Afghanistan, the registration target was 180,000 voters – two weeks ago they had already registered 210,000, far exceeding expectations, and more people are still lining up. How many of the women who've registered to vote will actually be allowed by their men folk to go to polls remains an open question, but the fact is that millions have officially put their names down and carry their cards as a sign they want to have a say in their country's future.

President Hamid Karzai is easily the favorite to win the election, but with 17 other candidates in the field, most observers predict he will fail to win the 50 percent majority required to win outright. It may come down to a run-off. His most likely opponent is the former Education Minister, Younus Qanooni, who just resigned from the government to announce his candidacy – just as Karzai dropped the country's most powerful warlord, Marshall Fahim, as his running mate.

That was a bold move, and one that has been relatively unpopular among many of Fahim's supporters, who number many among the Northern Alliance soldiers that helped America defeat the Taliban. Karzai has been criticized for bringing Fahim and other warlords legitimacy by including them in government and negotiating with them but he has strongly defended his inclusive approach, arguing that compromises have to be made for peace.

That approach was backed by American envoy, Lakhdar Brahimi, in the immediate aftermath of the war and is still supported by the U.S. ambassador, Zalmay Kalilzaid. who recently brokered a ceasefire in a bloody outbreak of violence in western Afghanistan.

But Karzai and his U.S. backers know there are difficult times ahead if the country is to move forward on disarmament and eradicating the drug trade. Many warlords, or local commanders, have held onto most of their heavy weapons and are heavily involved in the illegal production, manufacture and trade in opium. They have for centuries bought the loyalty of local people with food and guns.

So building a stable, peaceful country and an economy that is not dependent on crime, (the illegal opium trade makes up half Afghanistan's economy) means Karzai will have to come through on his promise to crack down on anyone who is not prepared to hand over their weapons.

The president knows he must walk a very fine line between the different ethnic groups whose rivalries have torn his country apart for centuries – while convincing people who see him as America's choice that he is not a puppet. Many Afghans I have spoken to are excited about the election but see it as a foregone conclusion because they do not believe for a moment that America, with all its money and might, would allow anyone else to take over.

The idea that America does not control the election and will have to live with whomever the Afghan people choose is laughed at in many circles. But that has not dampened the enthusiasm of so many here who have embraced peace and all the advantages it brings. Families have been reunited and no longer live in fear, more girls are going to school than at any other time in this country's history and there is hope, real hope for a life without bloodshed and violence and constant fear.

The problem is the country remains very poor and in some places, very divided. There are people who do not want this presidential election to take place on Oct. 9 and will do everything they can to stop it. That means putting a bomb in a mosque to kill people registering to vote, as they did last month, and targeting women who are carrying voter registration cards, forcing them off a bus and executing them at point blank range. These and more attacks just as horrific are expected here in the coming weeks as the elections get closer and closer. There are now rocket attacks every few nights in the Afghan capital, but they are nothing compared to the 3,000 rockets that rained down on this city every day during the civil war.

The people I speak to here sense there is a real window of opportunity, unlike any Afghanistan has ever faced before. But is has to be seized or the forces working against it will triumph. And it is a sad fact of this war that it is much, much easier to terrify people than it is to earn their trust. That it takes much longer to build bridges and roads and schools that it does to destroy them. And those waiting for America and her allies to leave have nowhere else to go. All they are waiting for is the resolve of the American people to break, their commitment to rebuilding this country to waver, and they will be back.