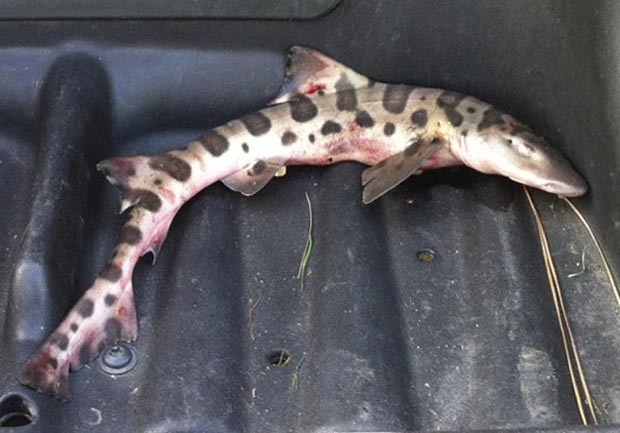 SAN JUAN CAPISTRANO, Calif. Nobody yelled "Fore!" at a Southern California golf course when a 2-foot-long shark dropped out of the sky and flopped around on the 12th tee.

The 2-pound leopard shark was apparently plucked from the ocean by a bird then dropped on San Juan Hills Golf Club, Melissa McCormack, director of club operations, said Thursday.

No one was teeing up when the shark fell Monday afternoon, although some golfers had just left the area, she said.

A course marshal, who makes sure players maintain an appropriate pace, saw something moving around on the tee and went to investigate. He found the shark bleeding with puncture wounds, where it seems the bird had held it in its grasp.

The marshal put the shark in his golf cart and drove it back to the clubhouse.

"He went above and beyond," McCormack said.

The marshal, McCormack and employee Bryan Stizer wanted to help the small shark, so they stuck it in a bucket of water. Then somebody remembered it wasn't a fresh water animal, so they stirred up some "homemade sea water" using sea salt from the kitchen, she said.

"We knew we had to get it to the ocean as fast as possible," McCormack said.

She grabbed a photo of the shark before Stizer headed to the sea.

"When Brian put it in the water, it didn't move," she said, "but then it flipped and took off."

It's the first time anyone could remember a shark falling from the sky at the golf course.

"We have your typical coyotes, skunks and the occasional mountain lion, but nothing like a shark," McCormack said.

Stizer told CBS Los Angeles that he assumes a bird may have dropped it since the shark had a puncture wound on its fin with fresh blood. California Fish and Game, however, said that there is a black market for leopard sharks and it may have gotten dumped on the course after getting too big for someone's tank.