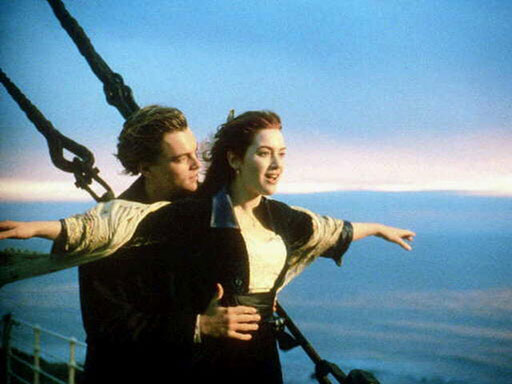 (CBS) Leonardo DiCaprio and Kate Winslet are on top of the world - the "Titanic" costars were voted the most romantic onscreen couple of all time.

The pair beat out duos from classics like "Gone with the Wind" and Casablanca."

ABC News and People magazine put the question to a popular vote, and the 1997 film's star-crossed lovers, Jack and Rose, came in first place.

In the film, Jack, a poor artist, meets Rose, a society woman engaged to be married, aboard the doomed ship. A whirlwind affair - complete with nude sketches, a steamy love scene and that Celine Dion song - ensues. When the Titanic sinks, the pair say a heart-wrenching goodbye before Jack freezes to death in the icy water.

Here are the other duos who made up the top five:

2. Clark Gable and Vivien Leigh as Rhett Butler and Scarlett O'Hara in 1939's "Gone with the Wind."

5. Spencer Tracy and Katharine Hepburn, who starred in nine films together including 1949's "Adam's Rib."

Do you agree with the list? Who do you think is the most romantic movie couple of all time? Tell us your thoughts in the comments.