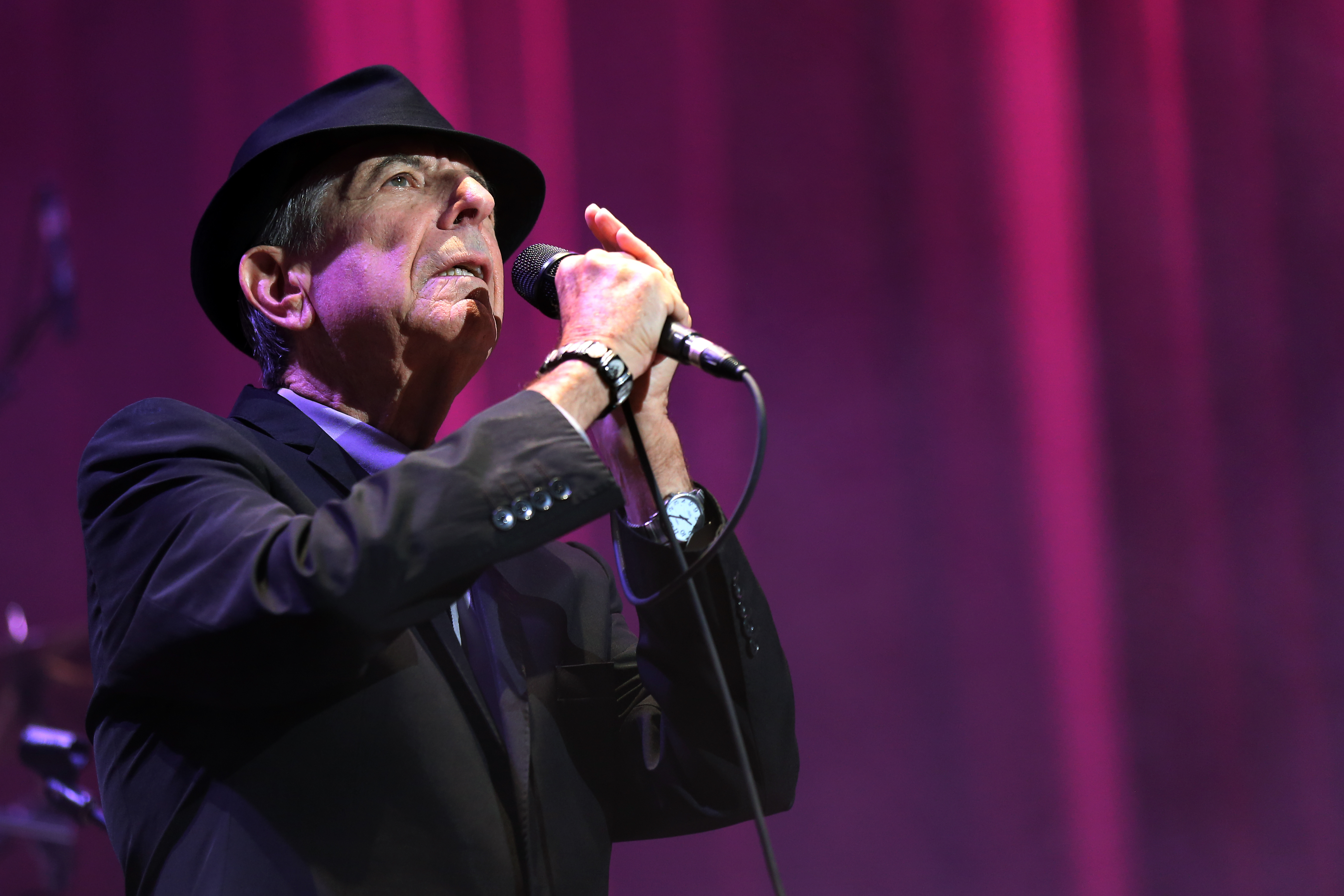 LOS ANGELES -- Leonard Cohen, the baritone-voiced Canadian singer-songwriter who seamlessly blended spirituality and sexuality in hits like “Hallelujah,” “Suzanne” and “Bird on a Wire,” has died at age 82.

Cohen’s label confirmed a statement on his Facebook page Thursday that he has passed away, and a memorial will take place in Los Angeles at a later date. No further details on his death were given.

“It is with profound sorrow we report that legendary poet, songwriter and artist, Leonard Cohen has passed away,” the post read. “We have lost one of music’s most revered and prolific visionaries.”

He remained wildly popular into his 80s, when his deep voice plunged to gravelly depths. He toured as recently as earlier this year and released a new album just last month.

His “Hallelujah” became a cult hit when it was covered by musician Jeff Buckley in 1994, singing an arrangement by John Cale, and has become a modern standard since, an unending staple on YouTube videos, reality shows and high school choir concerts. “Hallelujah” been covered many times over the years -- among the artists who have covered it are Bon Jovi, Rufus Wainwright, Regina Spektor, Michael McDonald, Norah Jones, Justin Timberlake, k.d. lang, Brandi Carlile, Susan Boyle, Bono, Willie Nelson and Renee Fleming. It was featured in the movie “Shrek” and TV’s “The O.C.,” “The West Wing” and “American Idol.” And outside of the entertainment world, “Hallelujah” has also been used at Jewish and Christian religious services.

Retired “Sunday Morning” host Charles Osgood did his own cover of the song in 2014.

Cohen, who once said he got into music because he couldn’t make a living as a poet, rose to prominence during the folk music revival of the 1960s. During those years, he traveled the folk circuit with the likes of Bob Dylan, Joni Mitchell, Joan Baez and others as they were moving popular music away from a reliance on lightweight pop lyrics to songs that contained deeply personal meanings.

His contemporary Kris Kristofferson once said that he wanted the opening lines to Cohen’s “Bird on a Wire,” on his tombstone.

They would be a perfect epitaph for Cohen himself: “Like a bird on a wire, like a drunk in a midnight choir, I have tried in my way to be free.”

The Montreal-born Cohen never seemed quite as comfortable on stage, however, and he chalked it up in part to being the old man among the group. “I was at least 10 years older than the rest of them,” he told Magazine, a supplement to the Spanish newspaper El Mundo, in 2001.

Judy Collins, who had a hit with Cohen’s song “Suzanne,” once recalled he was so shy that he quit halfway through his first public performance of it and she had to coax him back onstage.

Like Dylan, his voice lacked polish but rang with emotion, and as he aged its gravelly bass tone took on more power. In 1992, he won the Juno Award for vocalist of the year - the Canadian equivalent of a Grammy. While he never won a Grammy, Cohen received numerous other honors, including being named a companion of the Order of Canada in 1991, his native country’s highest civilian honor. In 2016, Dylan told The New Yorker that Cohen’s best work was “deep and truthful, “multidimensional” and “surprisingly melodic.”

“When people talk about Leonard, they fail to mention his melodies, which to me, along with his lyrics, are his greatest genius,” Dylan said. “Even the counterpoint lines - they give a celestial character and melodic lift to every one of his songs. As far as I know, no one else comes close to this in modern music.”

He was inducted into the Rock and Roll Hall of Fame in 2008, telling the audience: “This is a very unlikely occasion for me. It is not a distinction that I coveted or even dared dream about.”

In songs such as “Sisters of Mercy,” Cohen melded romantic imagery with minimal orchestration to produce music that rang with the authenticity of traditional folk songs. Many had a dark mood, featuring black humor or sardonic social commentary.

“Destroy another fetus now, We don’t like children anyhow,” was one of the lines from his song “The Future.”

Once asked if he was a pessimist, he responded with typical dark humor.

“I don’t consider myself a pessimist at all,’ he told the London Daily Telegraph in 1993. “I think of a pessimist as someone who is waiting for it to rain. And I feel completely soaked to the skin.”

Cohen suffered bouts of depression throughout his life that he sometimes tried to mitigate with alcohol and drugs.

When he gave his first U.S. concert in 15 years in early 2009, the 74-year-old received countless standing ovations from the sold-out crowd at New York’s Beacon Theatre.

“It’s been a long time since I stood up on this stage in New York City,” Cohen said. “I was 60 years old, just a kid with a crazy dream. Since then I’ve taken a lot of Prozac.”

Born Sept. 21, 1934, in Montreal, he formed a country music group called the Buckskin Boys while still in his teens.

He was attending McGill University when his poetry book, “Let Us Compare Mythologies,” was published in 1956 to critical acclaim. It was followed by “The Spice-Box of Earth” in 1961. His first novel, “The Favourite Game,” came out in 1963.

He published several more poetry collections while living on the Greek island of Hydra in the 1960s and began to get wide notice with his experimental novel “Beautiful Losers” in 1966 and his first album, “Songs of Leonard Cohen,” in 1968.

“Leonard Cohen seems on the verge of becoming a major spokesman for the aging pilgrims of his generation,” The New York Times wrote in 1968. He told the Times interviewer: “I don’t even think of myself as a writer, singer or whatever. The occupation of being a man is so much more.”

In all, he published more than a dozen novels and books of poetry and recorded nearly two dozen albums.

Born to a Jewish family, Cohen considered himself both a Jew and a Buddhist.

Biblical imagery appears in many of his songs. “Suzanne,” for instance, contains the lyric: “And Jesus was a sailor when he walked upon the waters.” The love song “Hallelujah,” which was used in the animated Disney movie “Shrek,” makes references to the biblical stories of Samson and King David and Bathsheba.

For decades, Cohen was a student and friend of Joshu Sasaki Roshi, a Zen Buddhist monk, and from 1994 to 1999 he lived as a disciple of Roshi’s at the Mount Baldy Zen Center in Los Angeles.

He claimed not to fully understand Buddhist concepts, but he said the retreat and its hard work gave him a better sense of himself.

“I was the cook up there,” he told Magazine. “My life was filled with great disorder, with chaos, and I achieved a little discipline there. So I decided to return to music.”

He continued to write and produce albums and books.

In 2006, Cohen won a lawsuit against his former manager, Kelley Lynch, whom he alleged stole more than $5 million of his retirement money while he was in seclusion at the Zen center. He was left with a nest egg of about $150,000, the lawsuit claimed.

Cohen was awarded $9.5 million but he was unable to collect it. He returned to touring in 2008-09 in part because of the financial losses, telling The New York Times the case was “a long, ongoing problem of a disastrous and relentless indifference to my financial situation. I didn’t even know where the bank was.”

Cohen never married but he had two children, Adam and Lorca, with artist Suzanne Elrod.

In later years, he was linked romantically with actress Rebecca De Mornay and with jazz singer Anjani Thomas, who performed on several of his albums.