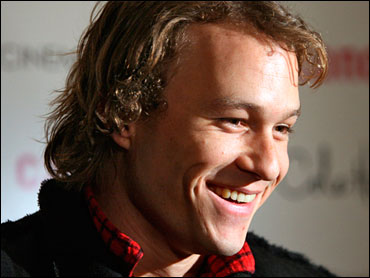 Although Heath Ledger's father Kim's intentions appeared honorable in his public statement saying that Heath's daughter Matilda and her mother Michelle Williams would be taken care of financially, his brothers aren't convinced.

Kim Ledger's brothers claim that his track record of mismanagement is something to be greatly taken into consideration.

According to People, Kim, who was in charge of Heath's great grandfather's estate 15 years ago in Australia, mismanaged the estate and therefore had to be removed as executor, the uncles claim.

"It plunged into enormous debt," Mike Ledger told the magazine.

Heath's great grandfather, Sir Frank Ledger was a well-respected engineer in Perth, Australia and close friend of premier Charles Court whose estate was worth about $2 million in the 80s, according to The Australian newspaper.

In 1986, Frank Ledger's health began deteriorating at age 87 and his grandson Kim moved in to help manage the estate and that's when things allegedly started going downhill.

According to The Australian, Frank Ledger was well off for decades when he sold his private company J&E Ledger in 1970, however, when he died in 1993, at age 93 he was broke.

His house overlooking Freshwater Bay, on the Devil's Elbow of the Swan River, was auctioned for $1.2 million by his bank in 1994 to recover debts racked up after Kim was made attorney in 1986, the Australian reported.

According to court documents, there were accusations made by two of Frank's daughters that Kim had "placed his own interests before that of the trust, and used the trust assets in order to advance his own business interests," The Australian reported.

Heath's other uncle, Hayden Ledger also spoke about the family conflict saying that Williams' father, Larry, asked him if Kim was capable of managing the actor's estate.

"I just said 'No, not if he handles it like ours,'" Hayden Ledger told People.

In 1997, Kim also went into business with Heath, then 17, as joint directors of Act 6 Pty Ltd; Kim was also the secretary and sole shareholder.

Although Heath left the company in 2002, the company remained in the family, but branched off to become HOKK Pty Ltd.

It has been suggested that the company's name stood for the initials of family members Heath, his sisters Olivia and Kate, and Kim.

The "Brokeback Mountain" star was 28 at the time of his death in January from an accidental overdose in his New York apartment.

In Ledger's will, he left everything to his parents and three sisters, which was dated two years before the birth of his child, Matilda.

"Matilda is our absolute priority and Michelle is an integral part of our family," Kim said in a statement, shortly after the terms of the will were revealed. "They will be taken care of and that's how Heath would want it to be."
By Melissa Castellanos