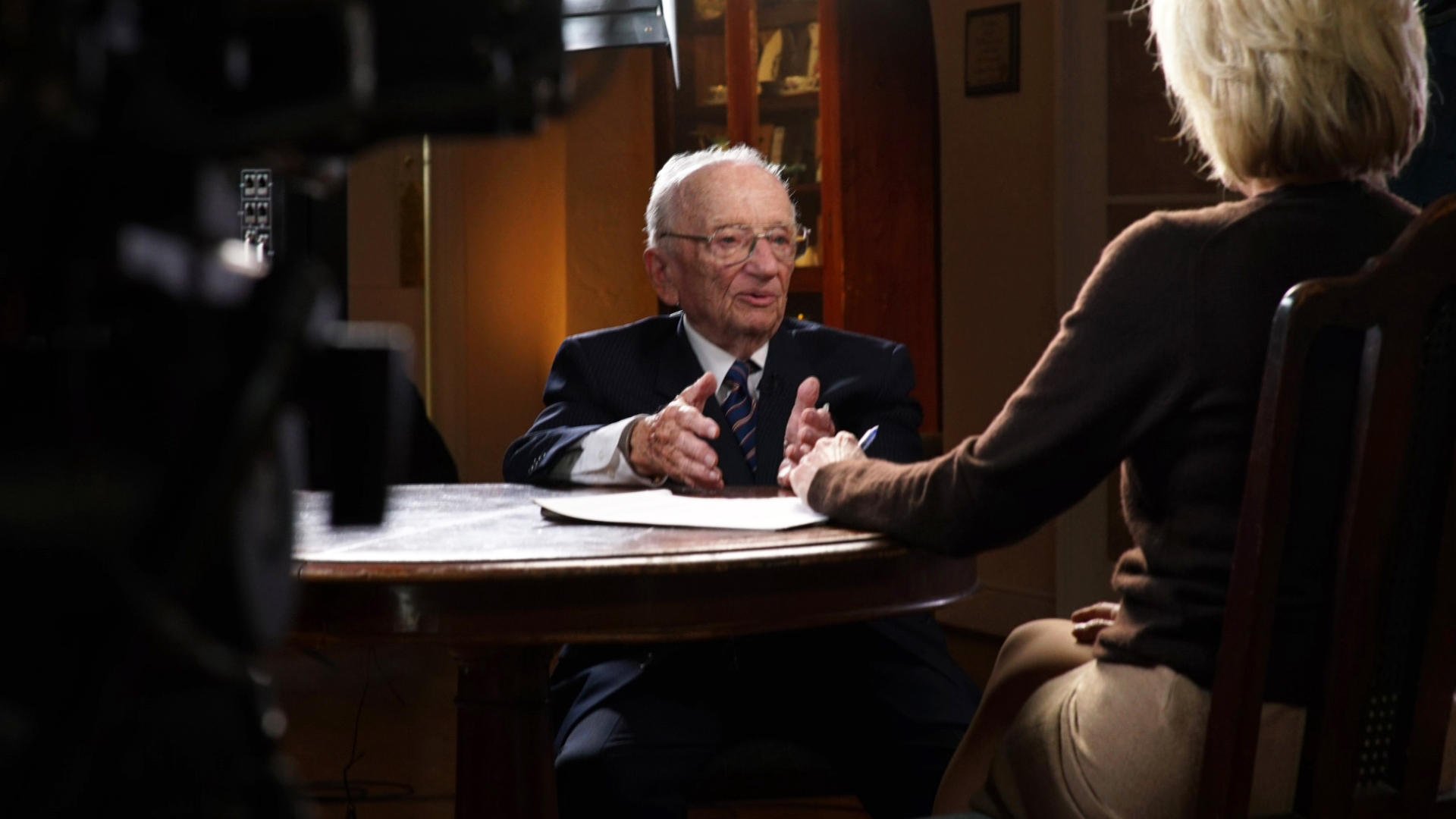 And the images he saw during the Holocaust are still vivid in his mind.

In a conversation with 60 Minutes Overtime, posted in the video above, Stahl says Ferencz wept when recalling the suffering he witnessed during the liberation of concentration camps. Seventy years after the trial, his anger at the Nazis was still palpable, she says.

"It's like hearing what has happened over the last 100 years from an actual, live person instead of having to read it in a book," Stahl says. "And … it felt like a privilege to be there with him."

This week's 60 Minutes profile of Ferencz was born from a master's thesis. Associate producer Nieves Zuberbuhler was completing her master's in journalism and international relations at NYU when she learned about Ferencz.

"And I've been fascinated by him ever since," Zuberbuhler says. She proposed the story to veteran 60 Minutes producer Shari Finkelstein, who agreed to pursue a story about Ferencz for the broadcast.

The son of poor Jewish parents from a small town in Romania, Ben Ferencz immigrated to the U.S. when he was a baby. He became the first in his family to go to college, eventually graduating from Harvard Law School.

During World War II, he enlisted as a private in the Army, and because of his legal training, he was transferred to a unit created to investigate war crimes. As U.S. forces liberated concentration camps, his job was to rush in and gather evidence.

"He says that he can never forget those human stories that he witnessed," Zuberbuhler says. "That he thinks about [them] every single day of his life."

Although Ferencz says those stories still haunt him, he describes himself as a "deliberate optimist."

"Despite the horrors that he saw during World War II, he has such a positive view on human nature and humanity," Stahl says, noting that Ferencz has a keen sense of humor.

Ferencz's 60 Minutes interview was filled with emotion and passionate pleas for peaceful solutions to international conflicts, but he also regaled Stahl, Finkelstein, and Zuberbuhler with funny stories.

One of those stories was about a chance encounter with Hollywood star Marlene Dietrich. Frenecz was on orderly duty in General George Patton's headquarters when Dietrich visited to entertain the troops. Dietrich wanted to freshen up before lunch, so she took a bath.

"There were no locks on the doors," Ferencz explains in the clip above. "So I opened the door, and sure enough, there is Marlene, stretched out in all her glory."

Ferencz nervously apologized, saying, "Pardon me, sir!" and hurried out. Dietrich was so amused by his error in referring to her as "sir," she invited him to lunch with a group of officers and General Patton.

"That's kind of a highlight of his life, to this day," Stahl says.

But the true passion of Ferencz's life is working to end war, which he calls "stupid." Since the trials at Nuremberg, he has spent the majority of his life working toward that goal, trying to deter war and war crimes by establishing an international court. Ferencz, whose personal motto is "law, not war," scored a victory when the International Criminal Court in The Hague was created in 1998. He delivered the closing argument in the court's first case.

Today, Ferencz is still fighting for peace — but he speaks out on other issues related to crimes against humanity, including the treatment of refugees.

Looking back on his opening statement at Nuremberg, Zuberbuhler sees the thread throughout Ferencz's life.

"That opening sentence, a plea of humanity [to law], that's what marked his whole life," she says. "Seventy years later, he's still fighting for the same goal with the same passion."

Ben Ferencz's bust bearing his motto "law, not war" was just installed outside the Nuremberg courtroom where he argued almost three-quarters of a century ago. He was also recently awarded the Pahl Peace Prize and nominated for a Nobel Peace Prize.

The videos above were originally published on May 7, 2017 and were produced by Ann Silvio and Lisa Orlando. They were edited by Lisa Orlando and Will Croxton.