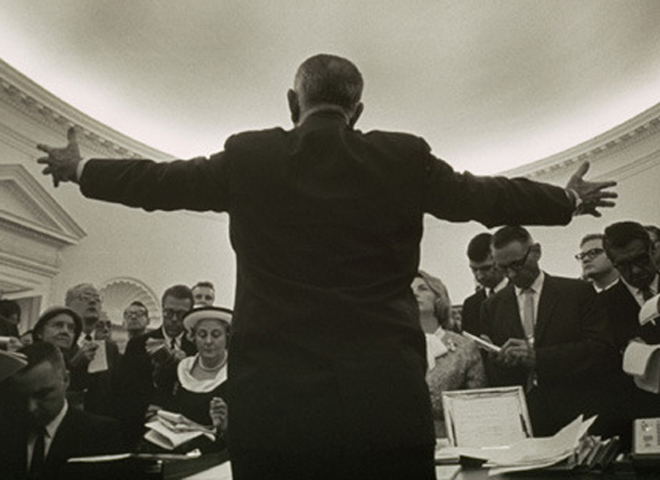 A much-anticipated book reminds us that the lives of a Pulitzer Prize-winning author and a former president remain bound together, despite the fact that the president in question died nearly 40 years ago. Rita Braver has the story of Robert Caro and Lyndon Baines Johnson:

Robert A. Caro understands passion. For more than 30 years he has concentrated on just one thing: The life and times of Lyndon Baines Johnson, the larger-than-life 36th President of the United States.

"He was 6'4" in an era when people were shorter," he said. "His arms were long for his height, his hands were big for his arms. They were huge, mottled hands. He'd grab your lapel, he leaned into you, he got bigger when he talked to you, because the passion was just boiling up within him."

What makes Johnson such a fascinating figure for him? "In the second half of the 20th century, in my opinion, Lyndon Johnson was the governmental figure who best understood political power," Caro replied. "He says, 'Whatever else they may say about me, I do understand power. I know where to look for it. I know how to find it. And I know how to use it.'"

And so Caro has spent decades writing a series of volumes about LBJ. The first three detailed Johnson's rise from Texas poverty to the most influential majority leader in Senate history. The fourth, "The Passage of Power" (out this week), begins during the 1960 presidential campaign, when Johnson - to his amazement - is out-maneuvered for the Democratic nomination by the aristocratic young upstart: Massachusetts Senator John F. Kennedy.

Johnson considered Kennedy a dilettante: "He said Kennedy was pathetic as a senator," Caro said. "He said, 'Rickety, sickly, not a man's man.' Johnson had contempt for Kennedy."

But, Caro says, the real blood feud was between Johnson and Robert Kennedy. The mutual dislike began the moment that Robert Kennedy and Johnson met. Caro offered a description by Johnson's press secretary, George Reedy: "Did you ever see two dogs come into a room and all of a sudden, the hair rises on the back of their necks and there's this low growl? That's the way they responded to each other the first time they met."

One of the most dramatic accounts in the book is how, when Kennedy realizes he needs Johnson to win the South and offers him the vice presidency at the Democratic convention, Bobby Kennedy tries to undo it.

LBJ did help Kennedy win the South, and the presidency. But Robert Kennedy and others in the administration treated Johnson with total disdain, according him no power or prestige as vice president.

"He was always so sad-looking that they called it a hangdog look," said Caro. The "long Texas strides," he said were short and hesitant now. "He realized that he had really been put in a position that didn't matter," he said.

Caro keeps notes about that, and thousands of other things filed away in his meticulously organized office known as "the bunker." He has talked to hundreds of people who knew Johnson.

He doesn't like computers, writes his first drafts in long hand, then pounds them out on his trusty Smith-Corona typewriter, drafting and redrafting his manuscript, fretting over every word.

"I don't know, now that people say I'm nuts!" he laughed. "I've heard the word obsessive. The book that's out now, 'The Passage of Power,' you could say, well you could've done that, his vice presidency and coming to the presidency, in a couple of chapters.

"But what you couldn't have done in a couple of chapters is examine how, when President Kennedy is assassinated, he has no transition period - like one minute he is not president, and then in another minute, the instant of that gunshot in Dallas, he is president. He gets back on Air Force One, he has to get off the plane in Washington and start making decisions. So you say, look at him doing that. Let's examine exactly what he's doing here."

"So you couldn't do that in a smaller book?"

In fact, Caro shows in great detail how, within days of taking the oath of office aboard Air Force One, Johnson moves to consolidate his power, using his first address to Congress to draw the country together and jump-start Kennedy's stalled legislative agenda.

"So let us here highly resolve that John Fitzgerald Kennedy did not live or die in vain!"

Caro came to the topic of Lyndon Johnson after writing another highly-acclaimed biography about Robert Moses, the urban planner who created modern day New York City. He won a Pulitzer for that, and another for one of his previous books about Johnson.

His last few books have been number one best sellers. They've bought him and his wife, Ina, an elegant apartment on Central Park.

"You don't live in a garret as a struggling writer," Braver said.

Caro ends this book with what is perhaps the greatest LBJ legacy: Passage of the 1964 Civil Rights Act. While Martin Luther King was leading a revolution in the streets, LBJ was threatening and cajoling a reluctant Congress into doing the right thing.

"This bill is going to be signed and enacted into law because justice and morality demand it."

And though this volume ends on a high note, Caro at age 76 is already at work on the next part of the story: How LBJ's presidency was ultimately undone by his pursuit of the Viet Nam War. It will be Robert Caro's last word on the man who has dominated his life for so long.

"People are always asking me, do I like him or dislike him?" he said. "You know, those words don't even apply to my feelings about him. I'm watching a man who was a genius in the use of political power. I'm awed by him."

Just how British are Britain's royals?
Thanks for reading CBS NEWS.
Create your free account or log in
for more features.
View CBS News In
CBS News App Open
Chrome Safari Continue
Be the first to know
Get browser notifications for breaking news, live events, and exclusive reporting.