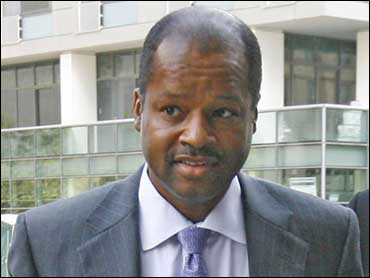 This absurd amount is how much Roy Pearson sought from a dry cleaners for allegedly losing his pants. They were gray trousers with blue and red stripes on them. They were his favorite pair of pants, and he had planned on wearing them on the first day of his new job. We all like to make a good impression, but I try to keep my first day wardrobe under $10,000,000.

Pearson claims that the Custom Cleaners of Washington, D.C., lost those special pants. The owners of the cleaners, Jin and Soo Chung, offered him more and more compensation to avoid the legal fees of a lawsuit, but Pearson kept saying, "No." After a week, the Chungs found the missing pants, but Pearson claimed they weren't his — despite their unique styling and the matching receipt.

Instead, he twisted a consumer protection law around and used its formula to come up with the figure of $64,800,000. Then he added what it would cost him to rent a car to go to a different cleaners for the next ten years, some more money for "mental suffering," and, of course, legal fees.

Perhaps you wonder how Pearson found an attorney willing to take his case. Well, he didn't have to look far. He represented himself. Yep, he's a lawyer. Pearson wasn't just a lawyer, but at the time of the lawsuit, he was a judge. Presiding as an administrative judge was the new job that he was excited about and why he wanted to wear those special pants in the first place. The judge who heard this case recently ruled against Pearson. Because of his behavior, Pearson might not get re-appointed to the bench. But if he loses his job, will the Chungs be able to collect legal fees from him? And what are they supposed to do with those pants with the red and blue stripes?

It's bad enough when an ordinary citizen brings about a ridiculous lawsuit. But I think there should be severe penalties for lawyers and judges — officers of the court — who are deemed to have wasted everybody's time and money with ridiculous lawsuits. They should know better.

Obviously, The Case Of the Pantless Judge isn't the first "frivolous" lawsuit that we've heard of. People in this country sue each other all the time. Just while you're reading this, I'm sure some kid has sued his mother and father for not giving him a nicer house to grow up in.

In 1991, a guy sued Anheuser-Busch for $10,000 for false advertising. He was upset because when he drank beer, he didn't succeed with women, as promised in the TV ads. In 1996, a Florida physical therapist sued his local nudie bar, claiming whiplash from a lap dancer's large breasts, which he claimed felt like "cement blocks" hitting him. And the list of "frivolous" lawsuits goes on and on.

But I think "frivolous" is too, well, frivolous a word for these kinds of cases. It doesn't even matter that most of these cases — like Roy Pearson's — are thrown out of court. Look at the damage that they do.

There are all kinds of books and movies these days about terrorists scheming to bring America to a halt. Sometimes these stories involve traffic, sometimes the stock market, and sometimes radio and television. But what about what's happening in our courts every day? All terrorists have to do is sit back and watch.

Those who make a mockery of our system by bringing about suits like this make me so mad that sometimes I just feel like suing the pants off them.

Lloyd Garver has written for many television shows, ranging from "Sesame Street" to "Family Ties" to "Frasier." He also has several pairs of pants, some of them with stripes.