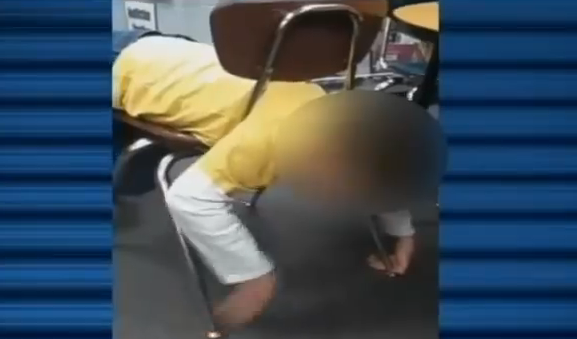 GOODRICH, Mich. - An elementary school teacher is on paid leave from her school in Goodrich, Michigan over an incident involving a 10-year-old autistic student.

CBS Detroit reports that Oaktree Elementary teacher Nicole McVey allegedly shot a cellphone video, obtained by CBS affiliate WNEM, of the 5th grade child after he got his head stuck in a chair.

McVey can be heard on the video seemingly taunting the student in a classroom full of kids.

"Do you wanna get tasered?" she asked.

Family attorney Patrick Greenfelder said McVey played the video at least three times for her class on a large-screen television.

"Then the teacher and the principal sent the video out to not only other teachers but some of their buddies, I guess. Just for laughs, apparently," Greenfielder told WWJ's Sandra McNeil.

The principal has already lost his job over the incident.

"It's my understanding that he was offered either to be fired or he could resign over the incident," Greenfelder said. "His voice can be heard in the video saying, as the kid's struggling in the chair and crying, that he didn't think it was of real high importance or high priority for the maintenance staff to come and free him."

Greenfelder said the pair took their time getting help for the boy.

Another school employee reported the incident to the superintendent. The school board voted to fire McVey, but she is currently going through a tenure hearing to fight the loss of her job.