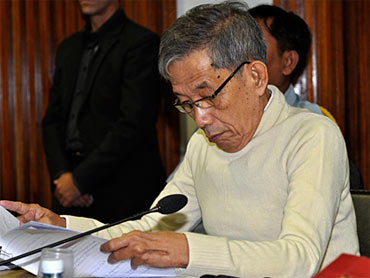 The genocide trial of a prison chief for Cambodia's Khmer Rouge entered its final stage Monday, as closing arguments began in the historic effort to assign responsibility for the deaths of 1.7 million people three decades ago.

The defendant, Kaing Guek Eav, commanded S-21 prison which punished those accused of disloyalty to the xenophobic communist group. He oversaw the torture and execution of about 16,000 men, women and children during its 1975-79 rule.

If the U.N.-assisted tribunal rules him guilty, the former schoolteacher faces a maximum penalty of life in prison, as Cambodia has no death penalty.

One of the lawyers for the victims evoked the specter of the Nazi death camps of World War II in recalling the Khmer Rouge's atrocities.

Pierre-Olivier Sur said the parents and grandparents of people of his generation had repeatedly said that "the death camps were over and would never happen again."

"The death camps and the mass graves have survived," he declared, referring to Khmer Rouge prisons and the infamous "killing fields," where they dumped their victims. He called for the tribunal to not let crimes against humanity go unpunished.

As much as one-sixth of Cambodia's population perished from execution, overwork, disease and malnutrition as a result of the Khmer Rouge's radical policies — including the mass evacuation of towns and cities, and the ruthless persecution of alleged rivals.

With some of the handful of S-21 survivors and family members of the dead looking on, another of the victims' lawyers charged that Kaing Guek Eav, also known as Duch (pronounced DOIK), pursued his role with zeal and had no empathy for his victims despite his expressions of remorse.

"Look at them, Duch. Look at these men and women who you wanted to smash, and whose parents and loved ones and children you smashed," said lawyer Philippe Canonne.

"You can smash insects and animals but you can't smash human beings, because one day they will come back, one way or another, or their successors to demand a reckoning," he said.

As he watched the proceedings, Duch showed no emotion. He is expected to give his final statement as early as Wednesday, a day after the prosecution begins its summation. He is charged with crimes against humanity, war crimes, murder and torture.

The closing arguments will conclude Friday, while a verdict and sentence are expected early next year. Under an innovative arrangement, the victims — known as the 'civil parties' — were represented at the trial, and their lawyers made Monday's presentations.

In his testimony, Duch has accepted responsibility for his role in overseeing the prison and asked for forgiveness from victims' families. He also told the court that he was ready to accept heavy punishment for his actions.

Despite that, said lawyer Karim Khan, the impression he gave at the trial is of a man trying to downplay his part in the activities at S-21 prison, which is in Phnom Penh and is now a genocide museum.

"The accused has sought to evade or minimize his role and the reality, the awful reality, that was S-21 and the regime that operated there and the fate and the suffering that befell so many civil parties," Khan said.

Another lawyer for victims, Kong Pisey, dismissed earlier assertions by Duch that he acted out of fear of being punished by his superiors. He portrayed Duch instead as someone who put everything he had into his job.

"He was not only proud of his job and convinced of the party line to identify and eradicate the enemy without any sense of guilt," Kong Pisey said. "Moreover, he enjoyed the power as a power-hungry man who performed more than 100 percent without any empathy for his victims."

He has denied personally killing or torturing the S-21 prisoners, and said he felt compelled by fear for his own life to follow the orders of senior Khmer Rouge leaders.

Francois Roux, Duch's lawyer, described his client as "nervous and anxious" about taking the stand for one last time and refused to detail what Duch would say. But he said that his client was hopeful the judges would take into consideration the fact he has admitted his guilt and apologized to his victims.

"At this moment it's very important to give credit to Duch for his guilty plea. Duch has recognized his responsibility," Roux said Sunday. "He has asked forgiveness from his victims."

The trial opened March 30. Some Cambodians have expressed frustration over how long it is taking, fearing the other aging defendants may die before they can be tried.