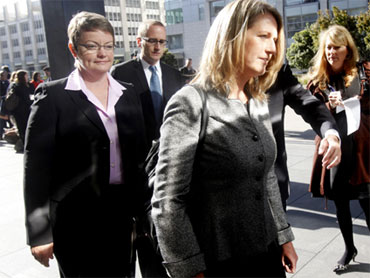 Lawyers arguing a landmark federal case involving California's same-sex marriage ban made their final arguments Wednesday, with supporters describing matrimony as an institution intended to promote childbearing and opponents saying the U.S. Supreme Court had recognized it as a fundamental right.

He told Chief U.S. Judge Vaughn Walker that tradition or fears of harm to heterosexual unions were legally insufficient grounds to discriminate against gay couples.

Former U.S. Justice Department lawyer Charles Cooper, who represents religious and conservative groups that sponsored the 2008 ballot measure, countered that cultures around the world, previous courts and Congress all accepted the "common sense belief that children do best when they are raised by their own mother and father."

"The plaintiffs say there is no way to understand why anyone would support Proposition 8, would support the traditional definition of marriage, except through some irrational or dark motivation," Cooper said. "That is not just a slur on the 7 million Californians who supported Proposition 8. It's a slur on 70 of 108 judges who have upheld as rational the decision of voters and legislatures to preserve the traditional definition of marriage."

Walker is being asked to strike down the measure that banned same-sex marriages in California five months after the state's highest court legalized the practice and after an estimated 18,000 couples from around the nation had tied the knot.

The judge heard 12 days of testimony in January, but closing arguments were delayed until Wednesday to give Walker time to review the evidence and because of a skirmish between lawyers about putting additional material from the 2008 campaign into the trial record.

Walker did not indicate when he might make his ruling in the trial, the first in federal court to examine if states can prohibit gays from getting married. Whatever the judge does will be almost surely be reviewed by the 9th U.S. Circuit Court of Appeals and could land before the Supreme Court.

Olson invoked the high court often during his closing argument, stressing that it has afforded prisoners serving life sentences and child support scofflaws the right to marry and refused to make procreation a precondition of marriage, as evidenced by laws allowing divorces and contraception.

"It is the right of individuals, not an indulgence to be dispensed by the state," Olson said. "The right to marry, to choose to marry, has never been tied to procreation."

Judge Walker pressed Olson on that point, noting Proposition 8 supporters have gone to some lengths to argue that gays and lesbians only can have children with help from a third party, unlike opposite-sex couples.

"That is a difference," Walker said. "And why is that difference not one the Legislature or voters could rationally take into account in setting the marriage laws in California?"

Olson said that argument would only work from a constitutional standpoint if the ban's backers had proven that allowing gays to wed was a threat to heterosexual relationships, a requirement Olson said had not been met.

"You would have to explain or make some statement that allowing these other individuals we represent here today to engage in the institution of marriage would somehow stop people from getting married ... or cause them to get divorced," he said.

Cooper used his closing argument to try to persuade the judge that it was up to the plaintiffs to prove that voters lacked justification for outlawing same-sex marriage, even if they acted only out of fear of the unknown. He urged Walker to sidestep the "judicial tsunami they are asking you to sail into."

"The plaintiffs have to negate every conceivable rational basis that might explain the policy at issue," he said.

Cooper's repeated efforts to use the procreative abilities of opposite-sex couples as the rationale for Proposition 8 drew a series of challenges from Walker.

The judge asked if similar arguments were once used to keep interracial couples from marrying, and if procreation was so central to marriage, why didn't the state refuse to sanction marriage by infertile couples or couples who choose to remain childless?

"It is Orwellian, but isn't that the logic that flows from the premise that marriage is about procreation?" Walker asked.

Cooper answered that it would be impractical for governments to test couples to see if they were capable of having children before they marry or to require those that were capable to sign pledges that they would have children.

With respect to laws that banned interracial marriage, Cooper said, "those racist sentiments and policies had no foundation in the historical purpose of marriage, and in fact they were at war with it."

During Olson's rebuttal, the judge seemed to wrestle with whether he should declare Proposition 8 unconstitutional when public opinion appears to be moving toward accepting same-sex marriage, which is legal in five states and the District of Columbia.

"Your honor, there is a political tide running. And I think that people's eyes are being opened," Olson answered. "But that doesn't justify a judge in a court to say, 'I really need the polls to be just a few more points higher. I need somebody to go out and take the temperature of the American public before I can break down this barrier and change this discrimination."