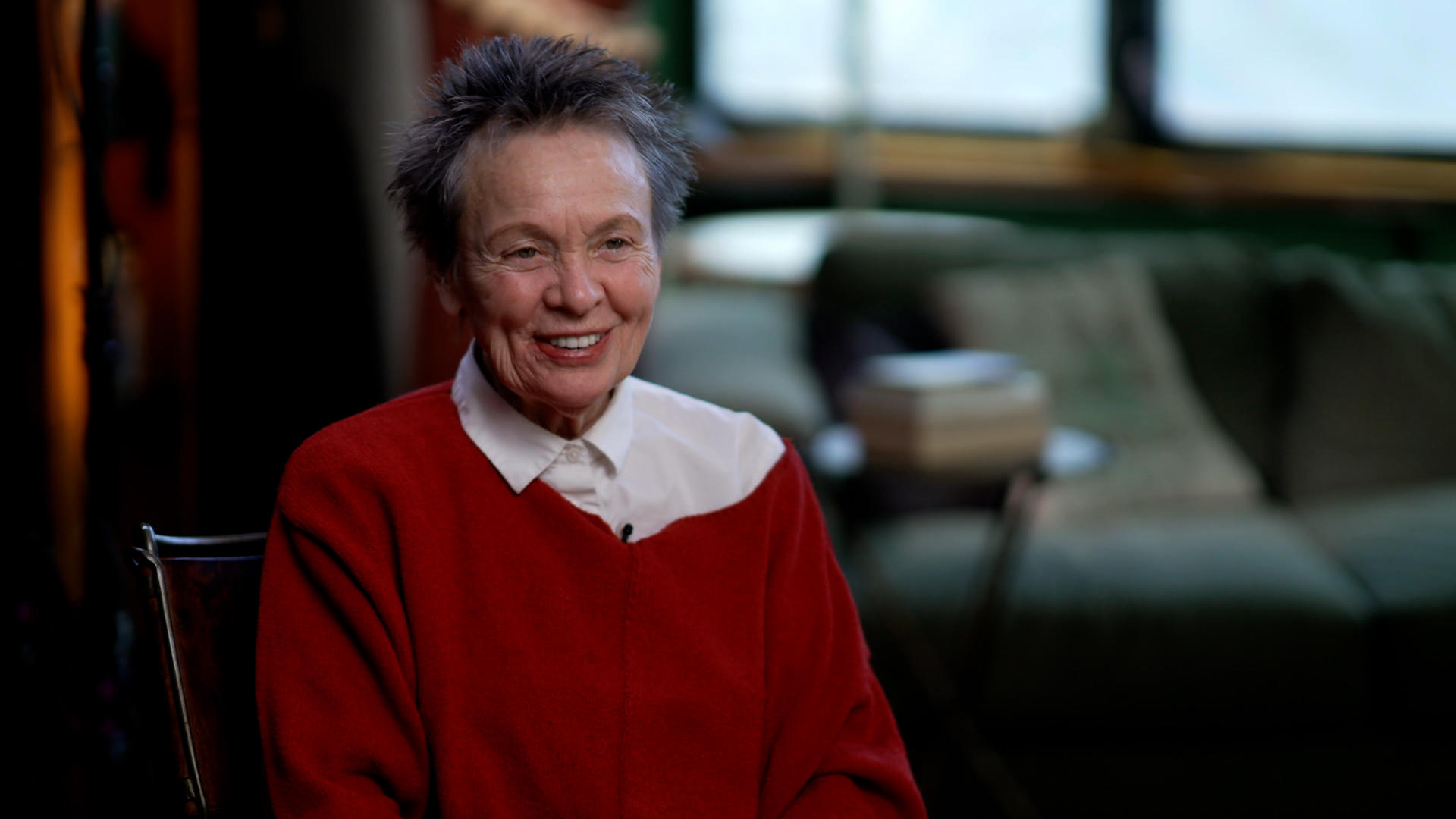 Laurie Anderson is an artist whose work defies any easy description. She's a pioneer of the avant-garde, but as we learned, that doesn't begin to describe what she creates.

Her work isn't sold in galleries. It's experienced by audiences who come to see her perform: singing, telling stories, and playing strange violins of her own invention. She won a Grammy for a chamber music album about Hurricane Sandy and remains one of America's most unusual and visionary artists.

We met at her largest-ever U.S. exhibition, at the Smithsonian's Hirshhorn Museum, earlier this year. Ladies and gentlemen, Laurie Anderson.

She's played electronic drums on her body and electric violins that sing and howl. For nearly five decades now, she's blended the beautiful and the bizarre, challenging audiences with homilies and humor.

She blurs boundaries across music, theater, dance, and film. It's not just audiences that have a hard time defining her work, Laurie Anderson sometimes does as well.

Laurie Anderson: With a gun to my head, I say I tell stories. And those look like paintings sometimes. They look like, you know, songs. They look like films. They're just stories. What is a story? What is its function? How does it work? Who's telling it? To who?

If you've heard of Laurie Anderson at all, it may be because of this eight-minute-long song she recorded back in 1980. It's eerie and somewhat unsettling and to her surprise, it became a hit.

Laurie Anderson: This was a song about how basically technology cannot save you.

Anderson Cooper: I first heard it when I was 14. I just was, like, what is this? And I still listen to it.

Laurie Anderson: It's about a lot of things – justice, safety, power.

She recorded "O Superman" herself in her apartment in downtown Manhattan.

Laurie Anderson: I had a lot of equipment that would loop things. So I was making a lot of vocal loops. Actually, you have to hit it right in the right spot. So they hock it and do this.

Anderson Cooper: You say, "'Cause when love is gone there's always justice."

Laurie Anderson: You do that very well.

Anderson Cooper: I've been listening to it for–

Laurie Anderson: You got the job.

The song led to her groundbreaking first album, "Big Science."

Anderson Cooper: Pitchfork said, "Listening to Laurie Anderson's first album is like sitting down with a strange form of life that has been studying us for a long time."

Laurie Anderson: I'd like to meet that writer. I mean, everything is when you actually break it down, bizarre. And unlikely. That's my lens, I think. Unlikely.

Laurie Anderson grew up in Glen Ellyn, Illinois, where she was one of eight children. Every weekend she played violin with the Chicago Youth Symphony and then walked across the street to The Art Institute to study painting.

Anderson Cooper: It was the same thing.

Laurie Anderson: Same thing. I would just, is that? Or is that? Is it…

Anderson Cooper: Playing the violin or painting was…

She came to New York in 1966 and began experimenting with music and short films. But after a while she thought her work might be better received in Europe.

Anderson Cooper: You wanted to tour in Europe.

Laurie Anderson: I did, yeah. I wrote to about maybe 500, let's say, art centers, saying, "I'm planning a tour in the fall." I had no tour. And "would you like to be part of that?"

With a couple responses she took off for Italy. That's her in 1975, playing a violin with a tape recorder inside playing loops so she could duet with herself.

Laurie Anderson: But then when is the concert over? There's no end to a loop. So I thought, "I need a timing mechanism." So I wore some ice skates with their blades frozen into blocks of ice. So when I'd play until the ice started melting and cracking. And then when I began to lose my balance, I would just stop. That was it. That was the clock.

Anderson Cooper: And you were doing this on the street?

Laurie Anderson: Yeah. Usually in the hottest part of town, because it could take a long time to have these things, the cubes melt.

For years she was a traveling troubadour, experimenting with sound, light and stories.

After the unlikely success of "O Superman," she got an eight-record deal with Warner Bros.  Suddenly, the avant-garde artist was playing on MTV.

Anderson Cooper: That must've been strange. To have that kind of commercial success dangled before you.

Laurie Anderson: I knew enough about the pop world to know it was extremely fickle. So I said, "OK, I'm not gonna be tricked by this."

A chance meeting with a rock and roll legend she'd vaguely heard of changed her life. His name was Lou Reed, and he asked her out.

Laurie Anderson: And we went over to the AES Convention at the Javitz Center. Super geeky thing to do. We were looking at tube microphones.

Anderson Cooper: So for your first date, you went to the Acoustical Society Engineering Convention. It doesn't sound very romantic.

Laurie Anderson: I didn't think of it as romantic.

Anderson Cooper: You didn't know it was a date?

Laurie Anderson: No, I did not.

They shared Buddhism, Tai Chi and boundless creativity – and finally got married in 2008. Five years later Lou Reed died after a long battle with liver cancer.

Anderson Cooper: You wrote about his death: "I've never seen an expression as full of wonder as Lou's as he died. He wasn't afraid. I had gotten to walk with him to the end of the world. Life, so beautiful, painful and dazzling – does not get better than that."

Laurie Anderson: Yeah, Lou was a person who had thought about this and had, had prepared himself for it and, and was 100% there.

Laurie Anderson still lives in the apartment they shared in the West Village, and everyday walks her dog, Little Will, to the studio she's had since the 1970s. When we dropped in on her, she was rehearsing with cellist Rubin Kodheli. It's an opera she wrote about Amelia Earhart's doomed attempt to circumnavigate the globe.

Laurie Anderson: She's on this crackly radio. And she's going like, "I can see you but I can't hear you." And they're going, "I can hear you, but I can't see you."

She's in perpetual motion, playing with technology and images, fascinated by language and sound.

She's working with an Australian university on an artificial intelligence program loaded with everything she's ever written, said or sung. You can ask it a question or give it a photograph, and the algorithm creates an original poem in the words and speech pattern of Laurie Anderson.

To see how it works we uploaded a photograph of my newborn son, Sebastian.

Laurie Anderson: "The mouth, the eye, the hand, the face. There's nowhere to go, no place to hide it. It's everywhere now that I'm here. I can't believe it's me. Who did this? Who are these people? Why are you here?"

Laurie Anderson: I know, it's–

Laurie Anderson: I know. See, the thing is it really shows us more that how much of ourselves we put into language.

Perhaps the closest anyone can get inside Laurie Anderson's mind is this virtual reality world she created with a collaborator in Taiwan.

Laurie Anderson: It's a world that looks spacial, but it's made of words and drawings.

It feels as though you're flying inside a work of art.

Anderson Cooper: You've been working with technology for 40 years now.  Does it still fascinate you?

Anderson Cooper: It's not the savior that some hope?

Laurie Anderson's largest-ever U.S. exhibition is currently on display at the Smithsonian's Hirshhorn Museum on the National Mall in Washington, D.C. It's an odyssey through her singular creative life.

Anderson Cooper: This seems very ominous to me.

Laurie Anderson: Good. There's so much flag-waving these days and it becomes quite mechanical in some ways and I guess I'm terrified of the rise of fascism around the world, frankly.

In one room she's painted words and images that seem to explode onto the walls and floor. It's a kind of multi-dimensional sketchbook of her thoughts, dreams and stories.

Anderson Cooper: Did you map this out before you did it?

Laurie Anderson: No, I should have.

New ideas are built on older works. She first came up with this concept in the 1970s.

Laurie Anderson: This is called "Citizens."

Miniature clay figures with video of people projected onto them.

Anderson Cooper: And I feel like they all want to kill me.

Laurie Anderson: This one does.

Anderson Cooper: They're all sharpening knives.

Laurie Anderson: So I think that's for me is the fascination of–

Anderson Cooper: These are some badass fairies.

In another room, another story. This one told by a giant video projection of Mohammad el Gharani, held for seven years in Guantanamo as a teenager without charge, until a judge released him.

Laurie Anderson: For me, I gave this person a megaphone to say, "It's your turn. What do you have to say?" This is not about my opinions of what happened here. This is Mohammed el Gharani's story.

Laurie Anderson is 74 now, and still conjuring up new stories, and new ways to tell them.

Laurie Anderson: I'm not an artist to make the world a better place. This is not my goal, you know, at all, except, like, secretly.

Laurie Anderson: Quietly. 'Cause I really love beautiful things. Because it's thrilling to put your mind somewhere else and be somewhere that you could never have imagined. And then suddenly you're imagining it. And then you're there. It's magic.