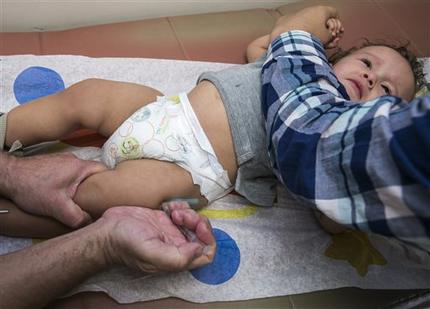 The largest U.S. measles outbreak in recent history isn't the one that started in December at Disneyland. It happened months earlier in Ohio's Amish country, where 383 people fell ill after unvaccinated Amish missionaries traveled to the Philippines and returned with the virus.

The Ohio episode drew far less attention, even though the number of cases was almost four times that of the Southern California outbreak, because it seemed to pose little threat outside close-knit religious communities.

The Disneyland outbreak has already spread well beyond the theme parks that attract tens of thousands of visitors from around the globe, who could then return home with the virus. Disease investigators for weeks raced to identify measles-stricken patients, track down potential contacts and quarantine them if necessary.

Public health experts say success at containing the outbreak will largely depend on how many unvaccinated people get the measles shot.

"This was a wake-up call," said Dr. James Cherry, a pediatric infectious disease expert at the University of California, Los Angeles. "It could continue to smolder" if not enough people get vaccinated.

The latest outbreak began when an infected person spread the illness to more than three dozen people at Disneyland who then exposed many others. Most were unvaccinated, according to state health officials.

In contrast, the Ohio outbreak "stayed contained within those communities, and outside people said, 'Well, it doesn't really affect me.' What's different with this one is more people can relate to Disneyland," said Dr. Gregory Wallace of the Centers for Disease Control and Prevention.

At least 145 measles cases have been confirmed in 14 states since the current outbreak began; most have been linked to people who visited or worked at Disneyland in December or exposure to infected people who went there. California health officials on Wednesday reported 99 measles cases including six new infections with a Disneyland connection.

Federal health officials said it's too early to predict whether this will be a particularly severe year compared with 2014, which saw more measles cases than any year since 1994. The Ohio outbreak accounted for more than half of the 644 measles cases reported last year.

Homegrown measles has not occurred in the United States since 2000 due to an aggressive vaccination campaign. But outbreaks have hit in recent years with nearly all cases linked to travelers who caught the virus overseas where measles still rages and spread it in this country among pockets of unvaccinated people.

In the Disneyland outbreak, public health officials have yet to identify the "index case" - the first person who contracted measles and spread it. But they believe it's someone who imported the virus from abroad and spread it during a visit to one of the theme parks days before Christmas.

Multistate measles outbreaks have occurred before, but when a "location has name-brand recognition to society, like Disneyland, it's going to get a lot of media attention," said Dr. James Wilson, a pediatrician and disease forecaster at the University of Nevada, Reno.

Wilson said California faces a bigger health problem - whooping cough, also known as pertussis, which killed two babies last year. The last time there was a measles death in the U.S. was in 2003.

Both measles and whopping cough can be prevented through vaccinations. The issue has stirred sometimes-angry debates and even entered the realm of presidential politics.

Since the Disneyland measles outbreak, parents who refuse vaccines for their children on religious or philosophical grounds have been on the defensive against a tide of doctors and public-health officials urging people to get the measles-mumps-rubella, or MMR, vaccine.

On Wednesday, California lawmakers sought to eliminate personal belief exemptions by proposing legislation that would require all school children to be vaccinated unless a child's health is in danger. If passed, California would join Mississippi and West Virginia with such strict vaccine rules.

Measles is extremely contagious and is spread by air through coughing and sneezing. Symptoms include fever, runny nose and telltale rash all over the body. The disease is particularly dangerous to pregnant women, people with weak immune systems and babies who are too young to receive the shot.

"I guess you could call it bad luck" that measles broke out at Disneyland, Wallace said. "But you make your own bad luck, too" by not getting the recommended measles vaccinations.

"I'm hopeful that within weeks or maybe a couple of months, we'll be able to turn the corner on this particular outbreak," Los Angeles County interim health officer, Dr. Jeffrey Gunzenhauser, said.