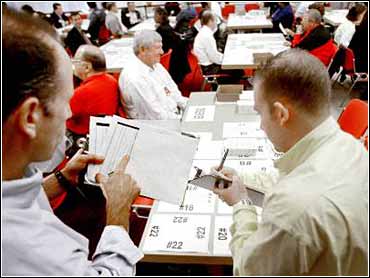 Echoing the election it hoped to clarify, a newspaper review of Florida's more than 170,000 uncounted presidential ballots found evidence of widespread voter confusion and no absolute winner.

USA Today and The Miami Herald reported Friday that George W. Bush would have narrowly won a hand recount under the strictest standards for judging votes, while Al Gore would have won under the most liberal.

USA Today, however, concluded that Al Gore probably lost between 15,000 to 25,000 votes — enough to have decisively won Florida and the White House — through mistakes made by Democratic voters that legally disqualified their ballots. The papers found Gore's name was marked on overvotes far more often than Bush's name.

More than any other conclusion, the five-month review showed the depth of voter confusion, the newspapers said.

"Ultimately, the lesson is the system we had in place caused so many people to misvote that the real result of the election isn't known," said Doug Pardue, projects editor for USA Today.

The papers agreed there were 111,261 overvotes, although the Herald said it examined 64,826 undervotes, while USA Today put the figure at 60,647. But the papers agreed on the final results of the analysis.

Last month, relying on accountants to review just the undervotes, USA Today and the Herald reported Bush would have won Florida under nearly every scenario had the U.S. Supreme Court allowed a statewide hand recount to be completed.

In the latest review, the papers relied on reporters to examine the overvotes and found 97 percent were marked so badly that no clear intent could be discerned.

Most of the remaining 3 percent, or 3,146 ballots, bore markings that made it clear who the voter preferred. Generally, this occurred when voters chose a candidate and then cast a write-in vote for that same candidate.

Gore wound up with a net gain of 682 votes from overvotes, leaving the outcome of any review up to the standards used when examining punchcard ballots with their infamous hanging chads.

With the strictest standard, the papers said, Bush would have won with 407 votes, fewer than the official 537-vote margin that gave him Florida's 25 electoral votes and the presidency.

With the most lenient standard — one that counted any dimpled ballot as a vote — Gore would have won by 332 votes, the newspapers reported.

"So what has changed?" saiformer Montana Gov. Marc Racicot, a Republican. "The only count that really counts is the one conducted under the rule of law."

For Democrats, the results confirmed their suspicions.

"These numbers certainly back up our feeling that more people turned out to vote for Gore than for Bush," said Doug Hattaway, a former Gore campaign spokesman. "It's hard not to cringe when you think about the possibilities."

Though the USA Today and Herald study found Gore might have won a narrow victory if lenient standards had been used, it also showed Gore could not have won without a hand count of overvote ballots throughout the state.

Early in the post-election struggle, Gore chose not to ask for an official statewide review of every rejected ballot — both undervotes and overvotes. Instead, he requested a recount only in four counties.

But if Florida's new election law had existed last November, Gore would have been entitled to a statewide review — automatically.