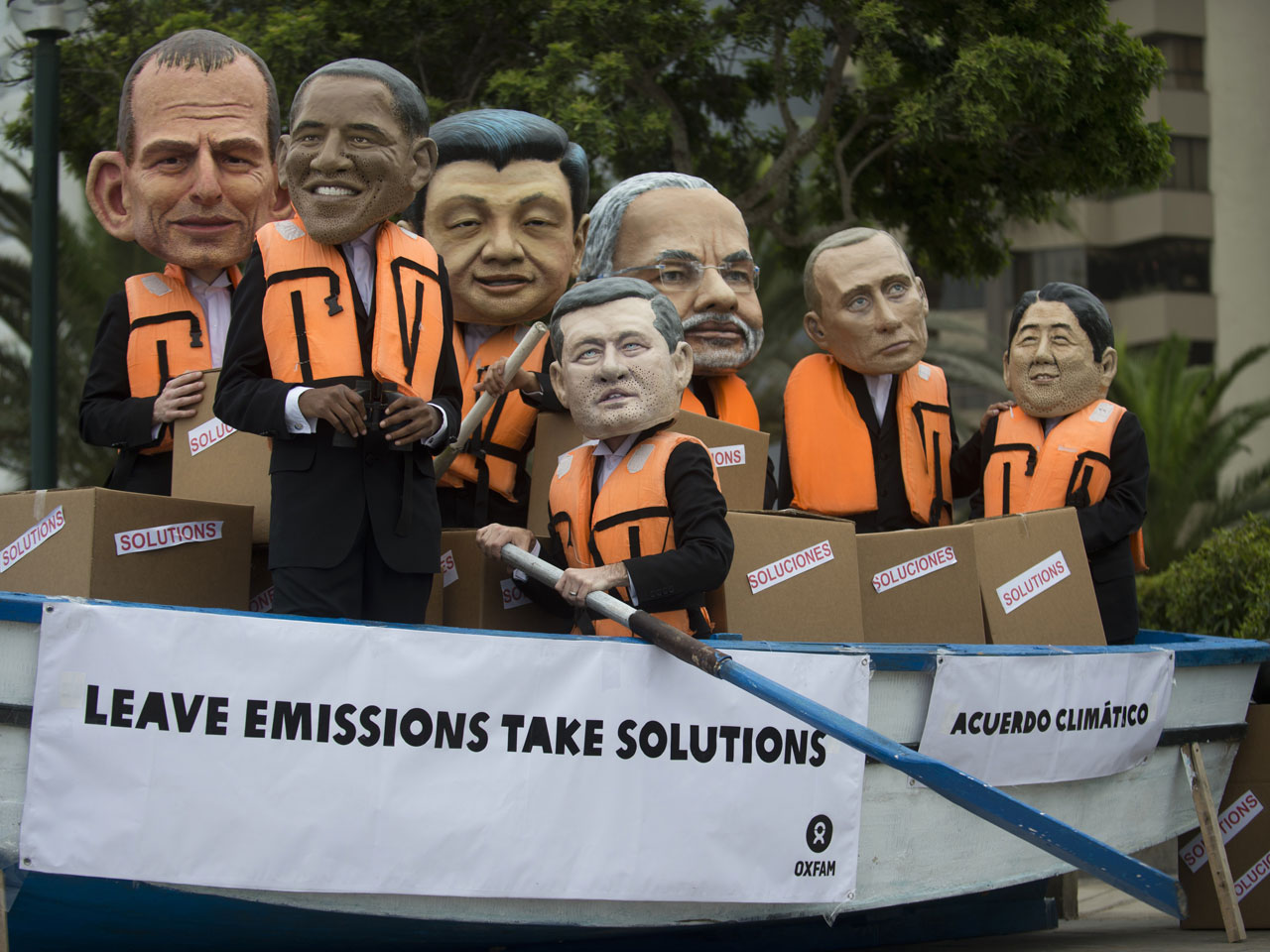 LIMA, Peru - After late-night wrangling at U.N. talks in Peru, negotiators early Sunday reached a compromise deal that sets the stage for a global climate pact in Paris next year.

The main goal for the two-week session in Lima was relatively modest: Reach agreement on what information should go into the pledges that countries submit for a global climate pact expected to be adopted in Paris. But even that became complicated as several developing nations rebelled against a draft decision they said blurred the distinction between what rich and poor countries can be expected to do.

The Lima agreement was adopted hours after a previous draft was rejected by developing countries who accused rich nations of shirking their responsibilities to fight global warming and pay for its impacts.

Peru's environment minister presented a new, fourth draft just before midnight and said he hoped it would satisfy all parties, giving a sharply reduced body of remaining delegates an hour to review it.

"As a text it's not perfect, but it includes the positions of the parties," said the minister, Manuel Pulgar-Vidal, who was the conference chairman and had spent all afternoon and evening meeting separately with delegations.

The final draft apparently alleviated those concerns with language saying countries have "common but differentiated responsibilities" to deal with global warming. It also restored language demanded by small island states at risk of being flooded by rising seas, mentioning a "loss and damage" mechanism agreed upon in last year's talks in Poland.

"We need a permanent arrangement to help the poorest of the world," Ian Fry, negotiator for the Pacific Island nation of Tuvalu, said at a midday session.

However, it weakened language on the content of the pledges, saying they "may" instead of "shall" include quantifiable information showing how countries intend to meet their emissions targets. Also, top carbon polluter China and other major developing countries opposed plans for a review process that would allow the pledges to be compared against one another before Paris.

The new draft mentioned only that all pledges would be reviewed a month ahead of Paris to assess their combined effect on climate change.

"I think it's definitely watered down from what we expected," said Alden Meyer of the Union of Concerned Scientists.

Sam Smith, chief of climate policy for the environmental group WWF, said: "The text went from weak to weaker to weakest and it's very weak indeed."

Though negotiating tactics always play a role, virtually all disputes in the U.N. talks reflect a wider issue of how to divide the burden of fixing the planetary warming that scientists say results from human activity, primarily the burning of oil, coal and natural gas.

The momentum from last month's joint U.S.-China deal on emissions targets faded quickly in Lima as rifts reopened over who should do what to fight the problem.

Some delegates expressed surprise that China, despite its joint announcement with the U.S., continued to insist on clear dividing lines between the climate action expected from developed and developing nations.

"I thought that they would not be as stern as they used to be in the past," said Tony de Brum, the foreign minister of the Marshall Islands, which is among the small island states that fear they will be submerged by rising seas caused by global warming.

Liu Zhemin, the deputy head of the Chinese delegation, stressed the principle in the 1992 U.N. climate convention that rich countries have a greater responsibility to fight climate change. He called China's announcement last month that it its emissions would peak by 2030 "a very ambitious target" that would require tremendous action.

Historically, Western nations are the biggest emitters. Currently, most CO2 emissions are coming from developing countries as they grow their economies and lift millions of people out of poverty.

During a brief stop in Lima on Thursday, U.S. Secretary of State John Kerry said fixing the problem was "everyone's responsibility, because it's the net amount of carbon that matters, not each country's share."

He warned that neglecting to forge an effective plan to fight climate change would be judged a "massive, collective moral failure of historical consequences."

"If we don't lead, future generations will not forgive us," Kerry said. "They will want to know how we together could possibly have been so blind, so ideological, so dysfunctional and, frankly, so stubborn" by failing to act on overwhelming scientific evidence.

According to the U.N.'s scientific panel on climate change, the world can pump out no more than about 1 trillion tons of carbon to have a likely chance of avoiding dangerous levels of warming. It already has spent more than half of that carbon budget as emissions continue to rise, driven by growth in China and other emerging economies.

Scientific reports say climate impacts are already happening and include rising sea levels, intensifying heat waves and shifts in weather patterns causing floods in some areas and droughts in others.

The U.N. weather agency said last week that 2014 could become the hottest year on record.