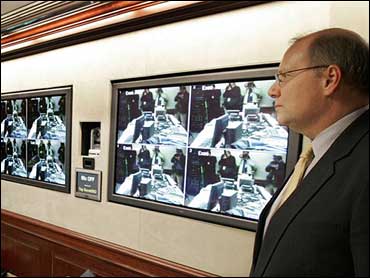 It's the feeling of many top White House staffers on this – Joe Hagin's last official day as Deputy Chief of Staff.

Hagin has served in the job from day one of the Bush Administration. There's no staffer who's been in the same senior level post longer than him. And there's no one at the White House whose been more intimately engaged in the moment-to-moment operations of the Executive Office of the President.

He was the one who modernized the communications system at the White House. He brought 21st century technology to the Situation Room (see above image) and renovated the worn and tattered Press Briefing Room.

"My job here has been to make the trains run on time and rejuvenate the institution and I've been very happy doing that," said Hagin in an interview with CBS News.

But as one of Mr. Bush's top aides for more than seven years, he has kept a deliberately low profile. And unlike his one-time fellow Deputy Chief of Staff Karl Rove, Hagin has never been served a subpoena.

And though he loves his White House job and regrets leaving – Hagin said he got a job offer in the private sector that he felt he couldn't refuse.

He'll soon be CEO of Jet Support Services, Inc., a Chicago-based company that he describes as "essentially an HMO for jets." It provides engine and airframe repair and maintenance at a guaranteed hourly cost.

"It should be interesting," he said. "I love airplanes and I've been involved in oversight of Air Force One and Marine One – so it'll be fun."

And it'll certainly be more lucrative than his $172,000-a-year government salary.

Leaving a top White House job also means leaving the presidential bubble. His days of police-escorted motorcades and flying on Air Force One are over. But he says it won't be a difficult transition for him.

"We only are treated that way when we're with the president," he said. "All of us travel independently and go through security lines like everyone else and I manage to drive home in the evenings without running too many stoplights."

In his West Wing office around the corner and down the hall from the Oval Office, Hagin was packing mementoes of his White House years. On the wall was a painting of Pres. Bush's landing aboard the aircraft carrier Abraham Lincoln on May 1, 2003.

It was Joe Hagin's idea that Mr. Bush – a one-time pilot in the Texas Air National Guard – fly to the carrier "Top Gun"-style aboard a Navy S-3B Viking warplane.

The flight went fine but he now confides "it was a little nerve-racking on the landing." It seems the plane came close to missing all of the four cables meant to catch the plane's tailhook. It snagged the last one by inches.

"And all of the F-18 pilots were bent over – their hands on their knees staring at the wire like baseball umpires and when it touched down they all went 'oooh' – spun around – and I heaved a huge sigh of relief," said Hagin.

It was on the deck of the Lincoln that President Bush delivered that now controversial Address to the Nation in which he announced – prematurely it turned out - that "major combat operations" in Iraq had come to an end. On display in the background was a banner proclaiming "Mission Accomplished" – which some took as a declaration that the war in Iraq was over.

Hagin says it was referring to the end of the Lincoln's mission overseas – not to the war. And to this day, Hagin remains "surprised" by the criticism of the flight and the banner – but still regards Mr. Bush's visit to the ship as "historic."

Few people have lasted as long in such a high-pressure job as Hagin, but he says he never felt burnout and could easily have stayed to the bitter end of the Bush Administration. Not being married helped.

"I'm single. People that have families and young kids – it's really hard to work at the White House for more than two or three years. In fact, I wouldn't recommend it to anybody in the incoming administration. If you're planning on coming here – you ought to plan on a two or three year period – because unless your kids are grown and out of the house – unless you have an unusual spouse who can put up with the extended absences and the late hours – it is a wonderful experience."

When he informed the president of his intention to leave, Hagin said Mr. Bush could not have been more understanding.

"He was really kind about it and very supportive and excited about it for me....that's the way he is. I've seen over the years, I've seen quite a few people that he's very close to leave. And he's always thinking about them – and not about himself and not about the impact on him and that was the way he was."

Taking over Hagin's pressure cooker position is a man more than 20 years younger: Blake Gottesman – who once served as Pres. Bush's "body man" – the personal aide who is always at the President's side. That's likely the greatest burnout job in the White House.