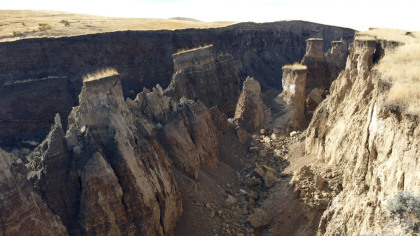 TEN SLEEP, Wyo. - A large crack in the Earth was discovered in a rural area near Ten Sleep in north central Wyoming, reports CBS Denver.

CBS Denver reports that geologists believe the crack is the result of a landslide. But it is unlikely anyone witnessed the landslide.

The size is estimated to be 750 yards long by 50 yards wide.

Chamois Andersen with the Wyoming State Geological Survey has seen pictures of the crack and told CBS Denver the evidence is all anecdotal so far, but not uncommon.

She said geologists there said: "It appears this may be due to groundwater has created weakness in what is already a saturated hillside. Further saturation like a wet spring and summer leads to more weakness, then the hillside shifted and caused a landslide with an associated large crack."

Andersen advised people to stay away from the site because it is considered an active landslide and unsafe. CBS Denver reports it is no a threat to anyone, but people are still advised to stay away.

Anderson said she believes the slide happened gradually, over a week or two.

One of those who saw the crack was a hunter, Randy Becker. He stopped to take some photos.

"I was stunned. The magnitude of this shift in Earth is dramatic," said Becker to CBS Denver. "It blows you away to see it."