If you think the sports term "lacing up" refers only to athletic footwear, you obviously haven't been going to the same sorts of games that our Bill Geist has been frequenting:

Hello sports fans! In a matter of hours the eyes of the nation and the world will be focused on this field, the site of Super Bowl 44. (XLIV for those of you who speak Latin.)

But it's not like the Super Bowl is the only bowl in town. There was the Dog Bowl this week the Celebrity Bowl, and the Bikini Bowl - but they don't even play football!

One I found particularly fascinating is the Lingerie Bowl - a game played not by Colts or Saints.

Geist asked two deacons: "I've never heard of that per se, but I don't think we'll be in attendance!"

One NFL player said if asked to play in lingerie he'd find a new profession.

Lingerie football, created as a pay-per-view half-time diversion during the Super Bowl, is now an entire league, where ten teams with names like the Dallas Desire, the L.A. Temptation, Chicago Bliss and the Miami Caliente, play a complete schedule - in incomplete uniforms. 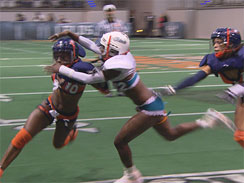 Lingerie football is not the powderpuff variety, not flag football or touch football. It gets downright ugly out there.

Taira Turley of the Miami Caliente seems like a real sweetheart. But what are people's reactions when she says "I'm a pro football player"?

"They laugh," Turley told Geist. "They look at me and go, 'You're a linebacker?'"

Danielle Monet is a cornerback of the undefeated Chicago Bliss.

"I know the reason why people come and watch us is the lingerie, the sex appeal," said Monet. "But what keeps them in their seats is when they see the ability we have and they see our plays and that we're the real deal." 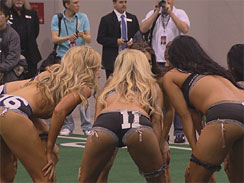 Summer LaViolette is a defensive end on the Bliss, who said she'd "pretty comfortable" in her outfit.

"I think it's very empowering for women to be sexy and tough," she told Geist. "We get turf burns, we might have a little 'wardrobe malfunction,' but it's all about football."

"We play games in 12 degree weather in lingerie, with snow falling in Denver, outside, so to say these girls are tough would be putting it lightly," said Mortaza. "Anything and everything you'll see at the NFL, you'll see here."

Brittany Nielson is a cornerback. "As far as injuries my linebacker tore ACL. I've had several broken fingers, torn muscle in my quad, and we keep coming back 'cause guess what, we love it so much. Just like any man that plays in the NFL loves it, we love it so much, and they probably don't believe it but we do!"

They practice four and five times a week.

Anonka Dixon is the star quarterback of the Miami Caliente. "I've been playing football since I was six years old. After you reach a certain age as a girl you can't play with the guys anymore."

Sort of the Peyton Manning of the LFL, only she's faster. She can throw a pass sixty yards with pinpoint accuracy.

On the receiving end is Tina Cacavalle, who looks like a model and leads the league in receptions and interceptions.

"I've always loved football," she said. "My parents wouldn't let me play. I was the water girl." 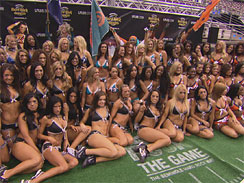 Game time … the playoffs on Thursday night. The prize? A trip to the Lingerie Bowl.

In this epic battle of strength, skill and human will, there will be cleavage.

The teams emerge from a tunnel through clouds of smoke. The "crowd" at the Seminole Hard Rock Hotel and Casino was light and scattered, but highly enthusiastic. The action: fast, furious, ferocious!

This night Temptation trumped Desire, the Bliss overcame the Caliente, the winners moving on to the pinnacle of lingerie sports.

Because the Lingerie Bowl was recorded last night for air today, we can't divulge the winner … but the beauty of lingerie football is . . . most fans don't really care!