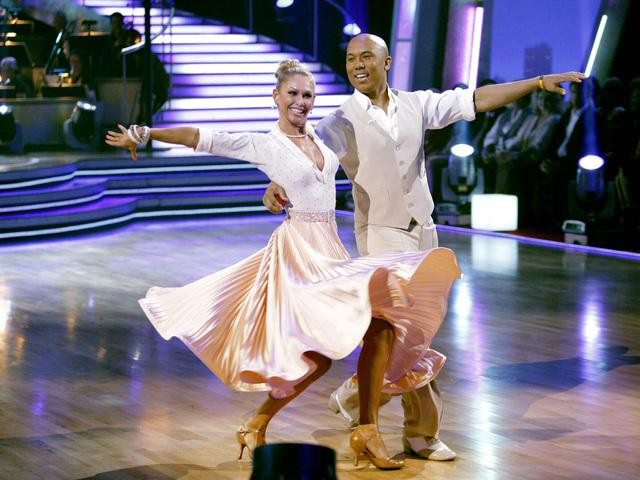 (CBS) Kym Johnson and Hine's Ward quest for the mirrorball trophy, which they won at Tuesday's "Dancing With the Stars" finale, almost came to a sad end  on May 13, when Johnson was injured in a fall during rehearsals.

In footage that has been shown several times on the ABC dancing show since then, Johnson and Ward were trying to execute a complicated lift when Ward fell and landed on top of her. "I can't feel my arms," she tells her stunned partner.

The Los Angeles Fire Department sent an ambulance to the "DWTS" rehearsal studios, and Johnson was taken out on a stretcher, wearing an oxygen mask, for transportation to a Los Angeles hospital.

She was released after treatment for what has been reported as a sprained vertebrae and has since been filmed wearing a neck brace during rehearsals.

"I was sick," Ward said of the injury. "You never wanna see your partner...we've been together for 10 weeks and that Friday was the worst Friday ever - to see your partner carted off and just being in the hospital with her and going over the MRIs."

This is the second trophy for Johnson, who also has appeared in the Australian version of "Dancing with the Stars." She and partner Donnie Osmond claimed the trophy in Season 9. Last season, she and partner David Hasselhoff were the first eliminated.

Dwayne Johnson buys every Snickers at 7-Eleven he used to shoplift from
Thanks for reading CBS NEWS.
Create your free account or log in
for more features.
View CBS News In
CBS News App Open
Chrome Safari Continue
Be the first to know
Get browser notifications for breaking news, live events, and exclusive reporting.