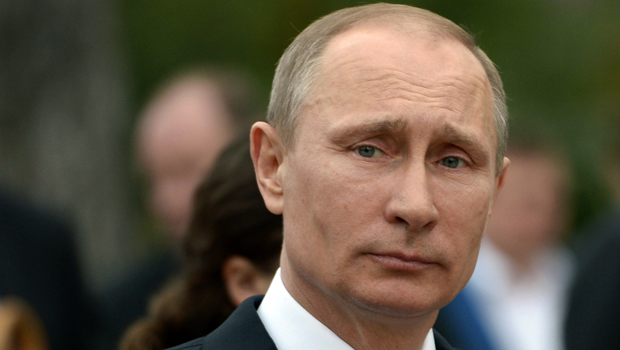 MOSCOW -- President Vladimir Putin's spokesman lashed out at the West on Friday and defended Russia's actions in Ukraine, but said he hoped a new Cold War would not break out despite "extremely deep disagreements."

The remarks, broadcast on one main state channel while another showed the Paralympic Games opening ceremony, appeared to be part of an effort by Putin to avoid a major confrontation with the West while giving no ground in the dispute over Ukraine.

Dmitry Peskov said "extremely deep disagreements of a conceptual nature between Russia and the European Union and the United States have already been registered."

But he added: "There still remains hope ... that some points of agreement can be found as a result of dialogue - which our partners, thank God, have not yet rejected."

Yet Peskov said calls for talks between Russia and Ukraine with the West as a mediator "make us smile." He said Western countries had failed to follow though on a Feb. 21 peace deal between Ukraine President Viktor Yanukovych and his foes, and that this had cost them their credibility.

Peskov also said the Kremlin was not behind moves by leaders in Ukraine's Crimea region to secede from Ukraine and join Russia. But Moscow was concerned there would be ethnic persecution if those behind what he called the "coup" that brought down Yanukovych were to reach Crimea or eastern Ukraine.

CBS News correspondent Elizabeth Palmer reports from the Crimean capital, Simferopol, that international monitors sent in to take stock in Crimea were given a message to butt out. When they showed up at the border between Ukraine and Crimea Thursday, armed men simply wouldn't let them in.

On Friday, the unarmed military observers from the pan-European Organization for Security and Cooperation in Europe were blocked from entering Crimea for a second day, the OSCE said on Twitter.

Russia rallied support for a Crimean bid to secede from Ukraine, with a leader of Russia's parliament assuring her Crimean counterpart that the region would be welcomed as "an absolutely equal subject of the Russian Federation." Across Red Square, 65,000 people waved Russian flags, chanting "Crimea is Russia!"

The strategic peninsula in southern Ukraine has become the flashpoint in the battle for Ukraine, where three months of protests sent Yanukovych fleeing to Russia. Russia calls the new Ukrainian government illegitimate, and has seized control of Crimea, where it has a major naval base on the Black Sea.

Crimea's parliament has called a March 16 referendum on whether the semi-autonomous region should join Russia outright, a move President Obama has called a violation of international law.

Although Putin said Tuesday that Russia has no intention of annexing Crimea, he insisted that its residents have the right to determine the region's status in the referendum.

And Valentina Matvienko, the speaker of Russia's upper house of parliament, made clear Friday that the country would welcome Crimea if it votes in the referendum to join its giant neighbor. About 60 percent of Crimea's population identifies itself as Russian.

"If the decision is made, then (Crimea) will become an absolutely equal subject of the Russian Federation," Matvienko said during a visit from the Crimean prime minister, Sergei Aksyonov, and chairman of the Crimean parliament Vladimir Konstantinov. She spoke of mistreatment of Russian-speaking residents in Ukraine's east and south, which has been Russia's primary argument for possible intervention in Ukraine.

The Russian parliament is scrambling to make it easier for Crimea to join Russia. Russia's constitution lets the country annex territory only by an agreement "initiated ... by the given foreign government." That would entail signing an agreement with the new authorities in Kiev, whom Moscow doesn't recognize.

New legislation would sidestep that requirement, according to members of parliament, who initially said a new bill could be passed as soon as next week but have since indicated that they will wait until after the referendum.

On the other side of Red Square from the parliament building, 65,000 people gathered at a Kremlin-organized rally in support of Crimea.

"We always knew that Russia would not abandon us," Konstantinov, wearing a black leather coat, shouted from the stage. He also called on Moscow not to forget other Russia-leaning regions in Ukraine.

"We must not leave the Ukrainian people at the mercy of those Nazi bandits," he said, referring to the new government in Kiev.

The referendum will be conducted with what Crimean authorities have said are more than 11,000 pro-Russian forces in the region. The troops control all access to the peninsula and have blockaded all Ukrainian military bases that have not yet surrendered.

Russia has denied that its forces are active in Crimea, describing the troops who wear green uniforms without insignia as local "self-defense forces." But many of the troops, who are armed with advanced heavy weaponry, are being transported by vehicles with Russian license plates.

Hoping to pressure Russia to roll back its military presence, the United States imposed travel bans and cleared the way for financial sanctions on Russians and other opponents of the new Kiev government on Thursday. The European Union suspended talks with Russia on a wide-ranging economic agreement and on granting Russian citizens visa-free travel to the 28-nation bloc, a long-standing Russian objective.

Russia belittled the moves, with Vladimir Chizhov, the Russian ambassador to the EU, telling Russian news agencies: "If someone thinks that they can scare us with such horror stories, then they are deeply mistaken."

Putin was in Sochi on Friday for the opening of the Paralympics, where he was shown on television telling the head of the International Paralympic Committee, Philip Craven, that he hoped the games "will lower the heat of passions over Ukraine."

The Ukrainian delegation to the Paralympics said it would participate in Friday night's opening ceremony in the Black Sea resort, but warned it could pull out of the 10-day event if Russia makes more military moves.

"I don't remember a situation when the organizing country during a Paralympics started an intervention on the territory of a country taking part," said Valeriy Sushkevich, president of the National Paralympic Committee of Ukraine, in comments reported by the R-Sport agency. He said if the crisis were to escalate, "we cannot possibly stay here."

Sushkevich said he met with Putin on Thursday night to request peace during the games, and that Putin listened but made no guarantees.

Crimea would be the first territory to join Russia since the breakup of the Soviet Union in 1991. South Ossetia and Abkhazia, which broke away from Georgia after a brief 2008 war with Russia, have been recognized as independent by Moscow, but there have been few serious moves to enable them to join Russia.

For Putin, Crimea would be a dazzling acquisition, and would help cement his authority with a Russian citizenry that has in recent years shown signs of restiveness and still resents the loss of the sprawling empire Moscow ruled in Soviet times.

In Simferopol, 75 people turned out Friday for a rally at the local monument to 19th-century Ukrainian poet Taras Shevchenko. They spoke both Ukrainian and Russian, but waved Ukrainian flags and released white doves into the rainy sky.

One of those at the protest was native Russian speaker Anton Romanov, who said he opposes the occupation of Crimea by Russian troops.

"I'm against being forced to live in a different country," he said.
View CBS News In