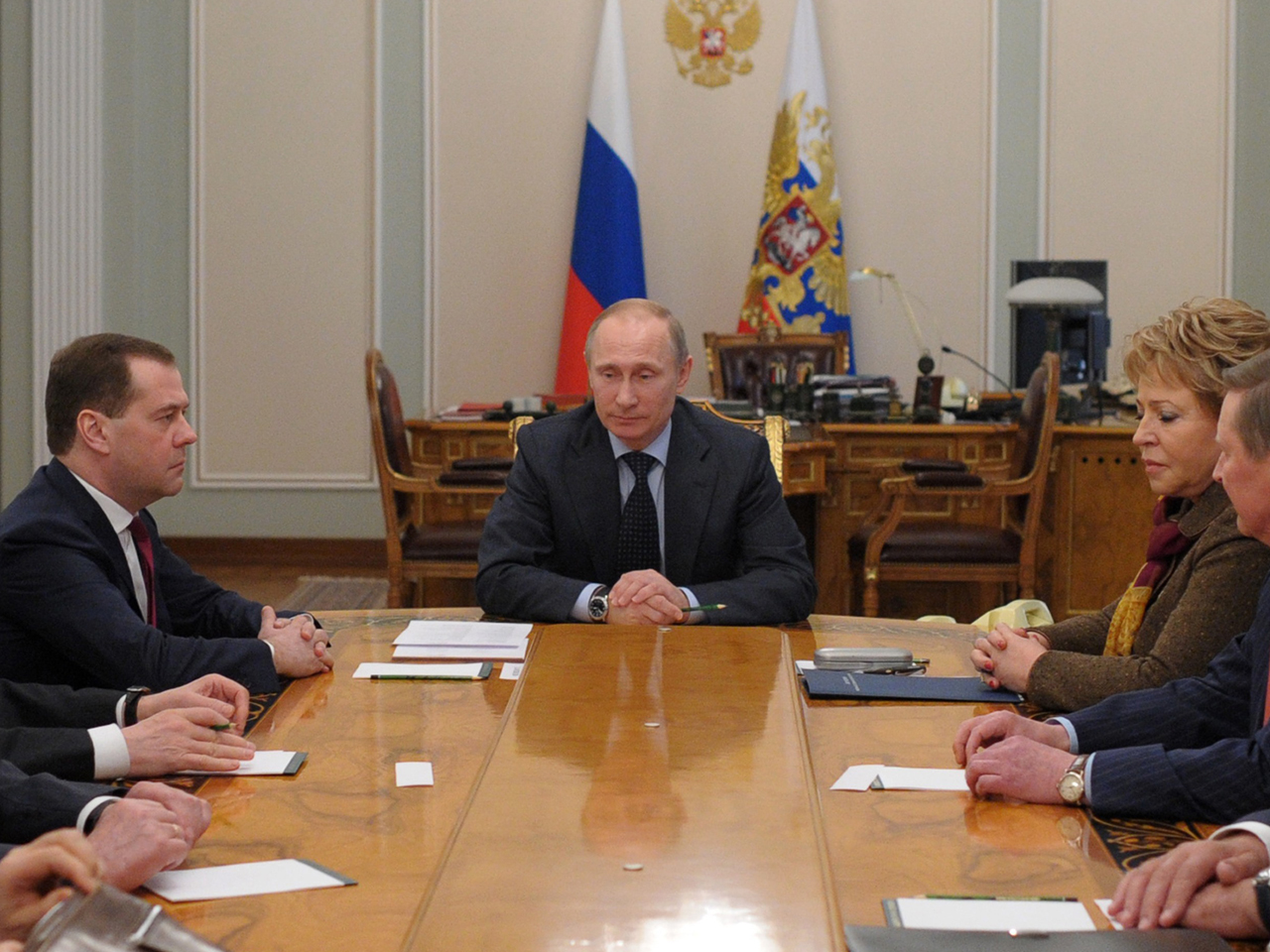 MOSCOW/SIMFEROPOL -- President Vladimir Putin rebuffed a warning from President Obama over Moscow's military intervention in Crimea, saying on Friday that Russia could not ignore calls for help from Russian speakers in Ukraine.

After an hour-long telephone call, Putin said in a statement that Moscow and Washington were still far apart on the situation in the former Soviet republic, where he said the new authorities had taken "absolutely illegitimate decisions on the eastern, southeastern and Crimea regions.

The most serious east-west confrontation since the end of the Cold War -- resulting from the overthrow last month of President Viktor Yanukovich after violent protests in Kiev -- escalated on Thursday when Crimea's parliament, dominated by ethnic Russians, voted to join Russia. The region's government set a referendum for March 16 -- in just nine days' time.

In a symbolic gesture highlighting the sharp cultural divide in Ukraine, as Crimean voters prepared to vote on becoming Russian, CBS Radio News correspondent Cami McCormick watched as workers hoisted the flag of the European Union on the front of the Ukrainian Foreign Ministry in Kiev on Friday.

The head of Russia's upper house of parliament said after meeting visiting Crimean lawmakers on Friday that Crimea had a right to self-determination, and ruled out any risk of war between "the two brotherly nations". Before calling Putin, Mr. Obama announced the first punitive actions against Russia since the start of the crisis. The White House slapped new visa restrictions on pro-Russian opponents of the new Ukraine government in Kiev and cleared the way for financial sanctions against Moscow for its occupation of Ukraine's Crimea region.

The new restrictions targeted an unspecified and unidentified number of people and entities that the Obama administration accused of threatening Ukraine's sovereignty and territorial borders. They were announced in Washington as Secretary of State John Kerry headed into a meeting with Russian Foreign Minister Sergey Lavrov in Rome.

The anticipated financial sanctions will penalize "those who are most directly involved in destabilizing Ukraine, including the military intervention in Crimea, and does not preclude further steps should the situation deteriorate," the White House said in a statement.

Japan endorsed the Western position that the actions of Russia, whose forces have seized control of the Crimean peninsula, constitute "a threat to international peace and security", after Obama spoke to Prime Minister Shinzo Abe.

China, often a Russian ally in blocking Western moves in the U.N. Security Council, was more cautious, saying that economic sanctions were not the best way to solve the crisis and avoiding comment on the legality of a Crimean referendum on secession.

The EU, Russia's biggest economic partner and energy customer, adopted a three-stage plan to try to force a negotiated solution but stopped short of immediate sanctions.

Brussels and Washington also rushed to strengthen the new authorities in economically shattered Ukraine, announcing both political and financial assistance.

Promises of billions of dollars in Western aid for the Kiev government, and the perception that Russian troops are not likely to go beyond Crimea into other parts of Ukraine, have helped reverse a rout in the local hryvnia currency.

In the past two days it has traded above 9.0 to the dollar for the first time since the Crimea crisis began last week. Local dealers said emergency currency restrictions imposed last week were also supporting the hryvnia.

In their telephone call, Obama said he urged Putin to accept the terms of a potential diplomatic solution to the dispute over Crimea that would take account of Russia's legitimate interests in the region.

Putin was defiant on Ukraine, where he said the pro-Russian Yanukovich had been ousted in an "anti-constitutional coup". But he underlined what he called "the paramount important of Russian-American relations to ensure stability and security in the world", the Kremlin said.

"These relations should not be sacrificed for individual differences, albeit very important ones, over international problems," Putin said.

He maintained Moscow was not behind the seizure of Crimea, home of Russia's Black Sea Fleet. Russia says the troops without insignia that have surround Ukrainian bases are "local self-defence units". The West has ridiculed this argument.

The 28-nation EU welcomed Ukrainian Prime Minister Arseny Yatseniuk to an emergency summit, even though Kiev is neither a member nor a recognised candidate to join the bloc, and agreed to bring forward the signing of the political parts of an agreement on closer ties before Ukraine's May 25 elections.

Yatseniuk said after returning to Ukraine that no one in the civilised world would recognise the result of the "so-called referendum" in Crimea. He repeated Kiev's willingness to negotiate with Russia and said he had requested a telephone call with Russian Prime Minister Dmitry Medvedev.

The European Commission said Ukraine could receive up to $15 billion in the next couple of years provided it reaches agreement with the International Monetary Fund, which requires painful economic reforms like ending gas subsidies.