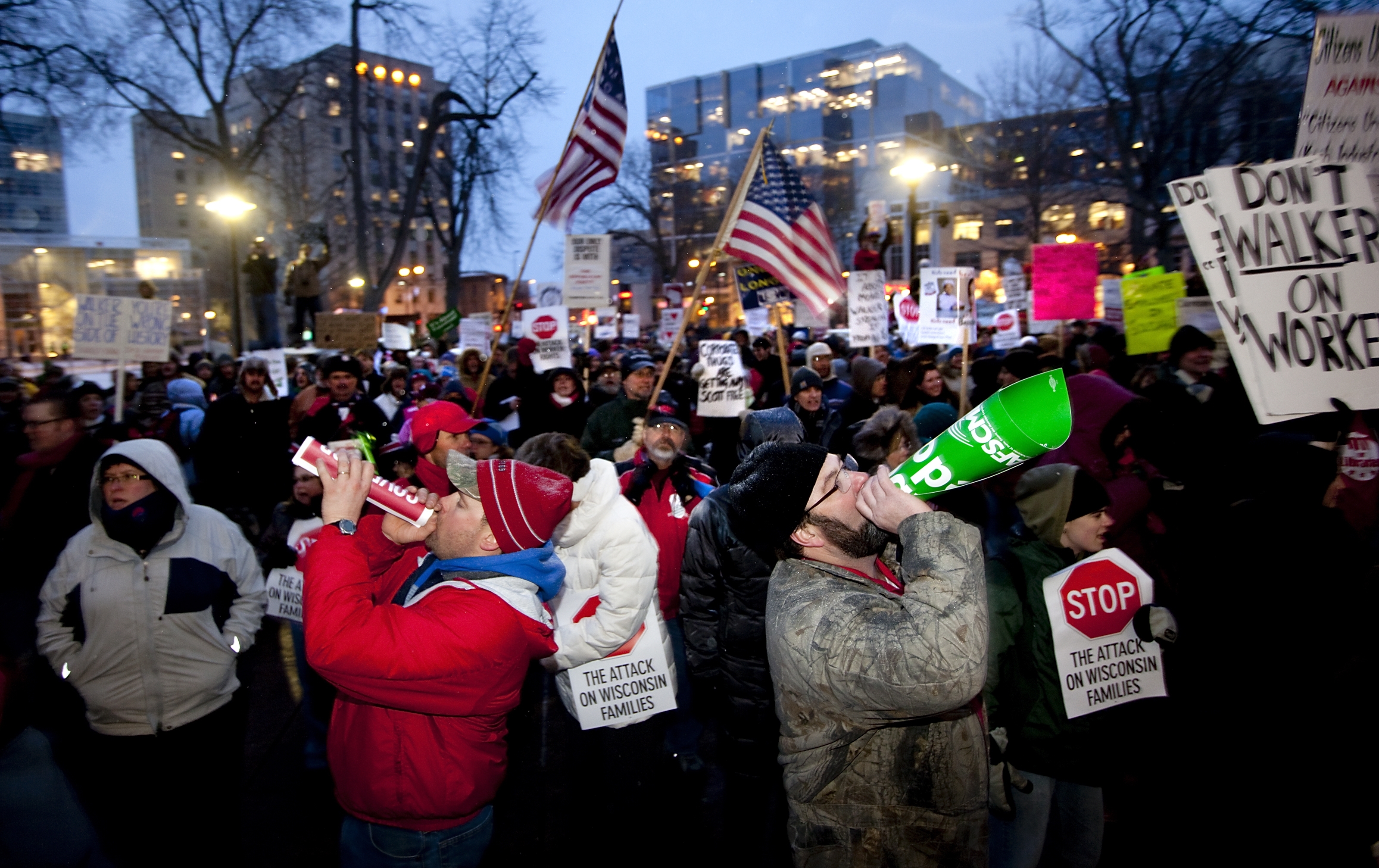 Wisconsin public sector workers and their supporters show no signs of slowing down their protests against Republican Gov. Scott Walker's anti-union legislation -- but conservative organizations are mobilizing their own robust efforts to back the governor.

More than 50 Tea Party leaders have signed a letter addressed to Walker encouraging him to press ahead with his plan. The letter comes from American Solutions, the conservative advocacy group formed by former House Speaker Newt Gingrich.

"We believe the results of the 2010 elections provided you with a mandate to implement change, so that Wisconsinites can have more jobs, more freedom, and more opportunity to pursue happiness now and for generations to come," the letter says. It criticized the "unsustainable benefits and pension plans" government employees receive, accusing unions of receiving those benefits in exchange for using their financial power to re-elect politicians.

The signatories include representatives from the Tea Party Express, the Wisconsin Tea Party Patriots, the Iowa Tea Party, the St. Louis Tea Party, Contract from America and several other groups from across the country.

Meanwhile, the conservative advocacy group Americans for Prosperity is launching an ad across Wisconsin today as part of its "Stand with Walker" campaign.

"Who decides Wisconsin's future, voters or government unions?" the ad asks. "Wisconsin voted for fiscal sanity & balanced budgets, but public employees walked off their jobs, abandoning our children. Democratic legislators don't even have the guts to show up for their jobs, hiding out in other states."

Along with praising Walker, the ad also takes a shot at President Obama, who last week called Walker's bill part of an "assault" on public employees.

Americans for Prosperity is largely backed by the Koch brothers, a pair of politically active conservative billionaires. Critics of Walker's anti-union plan are pointing to a provision in the legislation that would allow for the no-bid sale of state energy assets, alleging that Koch Industries would be the beneficiaries of such a policy. A spokesperson for Koch Industries told Politico it has no financial interest in Wisconsin's current political battle.

And as the battle over public worker benefits and rights spreads to other states, the Republican Governors Association is showing its support for Walker. The RGA last night launched the site StandWithScott.com that it says will serve as a "one-stop portal" for Winsconsinites and other Americans who back the governor.

"Wisconsin Governor Scott Walker is in the middle of what will be a defining moment for our country and the conservative movement," Texas Governor and RGA Chairman Rick Perry said in a statement. "It is essential that we stand with Governor Walker and show political leaders throughout the country that America is ready to take on its toughest political challenges."

Not all Republican governors have been as enthused about Walker's moves. Yesterday, Indiana Gov. Mitch Daniels reiterated his call for Republican lawmakers in his state to drop their similar anti-union legislation in favor of working on higher-priority legislation.

The Wisconsin legislation, which Walker has deemed his "budget repair bill," would among other things require state workers to pay more for their pension costs and health care. It would strip public worker unions of their ability to negotiate pensions, working conditions or benefits. Any wage increases would be tied to the Consumer Price Index, and unions would lose their ability to have dues deducted from state paychecks. The changes would apply to all state workers except police, firefighters and state troopers.

Public sector unions have accepted Walker's proposal to roll back their benefits in order to help balance the state budget, but they say rolling back collective bargaining rights goes too far - and has nothing to do with balancing the current budget.

In a televised address he deemed a "fireside chat" last night, Walker said he's not backing down. (Watch part of the address at left.)

Walker said eliminating most collective bargaining rights is necessary because "the system is broken," the Center for Media and Democracy reports. He repeated his threat that thousands of workers could face layoffs if the state legislature doesn't pass his bill.

While Walker has said his plan is about fixing the budget, National Journal reports that Wisconsin's budget shortfall could be fixed relatively simply with non-controversial measures. Moreover, Walker's plan could actually risk losing the state tens of millions in federal transportation funding because the new union laws would not meet federal standards, the Huffington Post reports.

While Walker is standing his ground, Wisconsin Senate Democrats are as well - more or less. Last week they fled Wisconsin to deprive the state Senate of enough votes to pass the measure, and they've given no indication of when they're coming back.

"This is a compromise that any good politician, any good leader, should be able to recognize and seize," he said.

With state senators still MIA, the Wisconsin Assembly has taken up the bill. It spent all of Tuesday night slogging through hundreds of amendments put forward by Democrats, and will continue to do so today.

Meanwhile, the fervent protests against Walker's bill continue across the state. The AFL-CIO promises that this Thursday will be largest demonstrations outside of Madison in Wisconsin's history.

On Tuesday night, protesters packed the capitol building during Walker's "fireside chat," the Center for Media and Democracy reports -- creating a deafening roar with chants, drums and vuvuzelas.