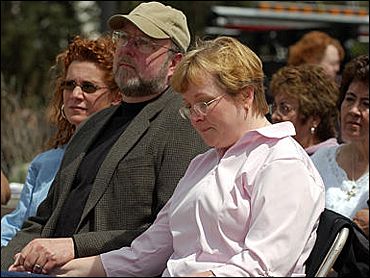 The mother of Kobe Bryant's accuser spoke publicly for the first time Monday, saying she was proud of her daughter amid the storm surrounding the high-profile sexual assault case against the NBA star.

"I would like to thank my daughter for teaching me about courage," the woman told about 100 people at a victims' advocates rally. "I'm proud to be her mom."

The accuser's father also was at the rally but didn't speak. They were invited to the annual event by the Colorado Organization for Victim Assistance as part of National Crime Victims' Rights Week.

The 19-year-old accuser did not attend. Her parents were not identified during introductions and committed to attend at the last minute, organizers said.

The accuser's mother spoke in support of pending legislation intended to protect alleged assault victims. The measure, which would allow judges to keep the names of alleged rape victims secret, was introduced in part because a woman was misidentified as the accuser in the Bryant case.

Bryant, a star with the Los Angeles Lakers, was charged with felony sexual assault after the woman told authorities he attacked her June 30 at a resort near Eagle where she worked. The 25-year-old guard says the sex was consensual.

If convicted of felony sexual assault, Bryant faces four years to life in prison or 20 years to life on probation. No trial date has been set.

None of what the mother said at the rally has any legal implications, reports Tony Lopez of CBS station KCNC.

"It's possible that some of the potential jurors in the court of public opinion watched this woman and said, 'boy what a nice woman, she loves and supports her daughter and appears to believe her daughter'," said CBS News Consultant Wendy Murphy, a former prosecutor. "Who knows whether that might have a positive effect on jurors who have heard all sorts of lies about this victim."

"I don't think it helps the case per se but it should remind us all that a real human being was terribly injured in this case," Murphy told CBS News Early Show co-anchor Julie Chen.

Last month, the woman's mother sent a letter to the judge asking him to set a trial date quickly so her daughter could begin to get on with her life. Her mother said the woman's life was in jeopardy and she has been forced to move from state to state to outrun the media and defense investigators.

The event also was attended by Eagle County District Attorney Mark Hurlbert, who was introduced but made no remarks.

Meanwhile, prosecutors have dropped charges of solicitation to commit murder against a man who allegedly offered to kill the Colorado woman who has accused Kobe Bryant of rape.

In exchange, Patrick Graber, 31, pleaded no contest to one charge of grand theft before Superior Court Judge Katherine Mader, the district attorney's office said. He faces up to three years in state prison when he is sentenced May 13.

"His main goal was to get money," said Deputy District Attorney Marguerite Rizzo said. "We felt this was an appropriate plea in this case."

"He's lucky to get it, because it was the best deal of his life," defense attorney Peter Knecht said. "He was facing 15 years. He'll do 18 months, and he's already done six months."

Knecht said Graber, who is from Switzerland, will likely be deported after he is released.

Graber was arrested in September during a meeting with undercover investigators, after Bryant's security staff reported receiving a letter from someone who claimed to have ties to the Russian mafia and offered to solve Bryant's problem. Graber allegedly sought $3 million.

He was seized as he reached for a bag of phony money brought by the detectives. His lawyer said a jury could have found him guilty of grand theft even though the bills were fake. The investigation showed Graber had no ties to Russian organized crime but had been convicted of fraud and theft in Switzerland.