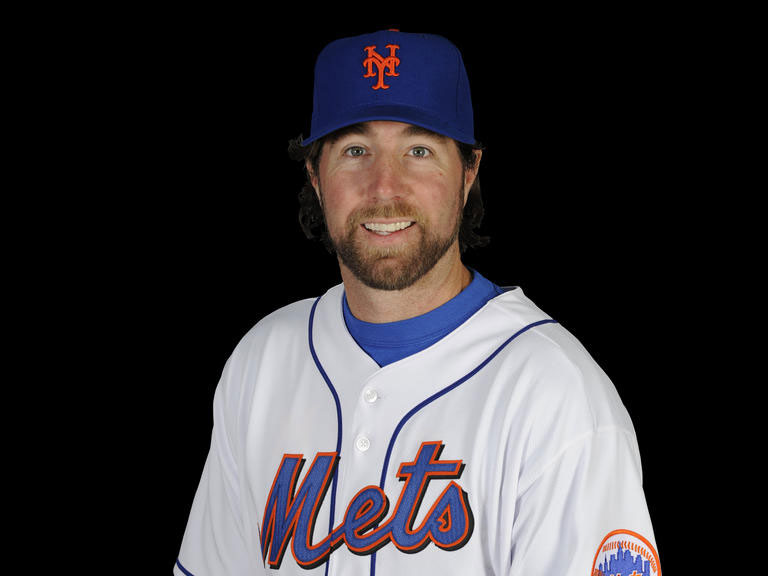 (MoneyWatch) Having the ability to throw a baseball at least 90 miles an hour is a rare gift. And pitchers that learn to bend it, slide it, or simply blow it by batters -- with control -- possess a skill that big league general managers will pay a fortune for.

But what if you're the type of pitcher who never knows exactly where the ball is going and who practically lobs the ball in a good 10 to 20 miles an hour slower with virtually no spin? That's a knuckleballer. Today there is exactly one such hurler in the majors: R.A. Dickey of the New York Mets.

His memoir, "Wherever I Wind Up: My Quest for Truth, Authenticity, and the Perfect Knuckleball," tells the story of a pitcher who was told not once but twice in his career that he was washed up. Now, at age 37, Dickey is at the top of his game, even though his control over his signature pitch remains as elusive as ever.

By contrast, Dickey seems to have control over his life, a quality that seems all too rare not only in the rarefied world of professional sports, but in all walks of life. That mastery forms the core of who he is, and it is why his story is worth reading from a leadership standpoint. As a boy, Dickey was subjected to sexual abuse beginning at age 8 by two different people. As he told Dave Davies of NPR's Fresh Air radio show, the experience left him feeling alone and isolated. His solace was sports, and he excelled in football, basketball, and baseball.

Dickey ended up playing in the College World Series for the University of Tennessee, and at the end of his junior year he expected to sign a $850,000 contract with the Texas Rangers, which had made him a first round draft pick in 1996. That plan was derailed when it was discovered that he lacked an ulnar collateral ligament. (Ironically, damage to that ligament is what requires pitchers to undergo "Tommy John surgery," or transplantation of the ligament from the non-throwing arm to the throwing arm.). The Rangers promptly slashed their contract offer to $75,000.

Dickey persisted and played his way into the major leagues. By 2005, however, his struggles on the mound threatened to end his career. So rather than give up the sport he loved, he made the bold move of reinventing his pitching style and learned to throw the knuckler, a ball that floats and flutters over the plate when it is working and veers maddeningly away from the strike zone when it is not. "A knuckleball is like trying to hit a butterfly in a typhoon," Dickey told Fresh Air. "It can be really ugly when it's ugly, but when it's on it's fantastic."

Why even great employees get average evaluations

Struggling to revive his career, Dickey then did something as unpredictable as a knuckler -- and far more reckless. He decided virtually on a whim to swim across the Missouri River, which lapped at the edges of his minor league team's hotel in Omaha, Neb. He nearly drowned.

"I look at it as a almost a baptism of sorts," Dickey told Davies. "I went into the Missouri River, I was hanging on by a thread professionally.... when I came out of the river I was so consumed with wanting to live in the present well -- wanting to enjoy every second -- that I think that carried over directly into my pitching." The harrowing experience also helped him deal with his past. He sought therapy, found comfort in his faith, and worked on his marriage.

Dickey's rebirth as a pitcher and as a person highlights a key attribute of effective leadership: resilience. I have found that most leaders are far more resilient than they know. Like Dickey, they tend to be high achievers, but at some point in their careers they hit a roadblock that stops them dead. For Dickey, it was not one thing holding him back; rather, it was 23 years of denying his painful past, leading him to make poor choices. Paradoxically, perhaps, that turmoil also gave him a sense of inner strength that he was able to tap, helping him persevere in a career and a game that he loved.

That spirit persists. In a video interview with Skip Prichard, CEO of wholesale book distributor Ingram Content Group and author of a leadership blog, Dickey was asked how people are able to overcome adversity. After acknowledging his religious faith, Dickey elaborated further:

"There's something inside us all that has the ability to make a choice. Human nature sets things up to where you know the right decision... you're almost choosing... but you know it... But I can't underscore enough how valuable it's been to have people who love me well."

In other words, resilience comes from within us, but it is nurtured by people who care about us, too.