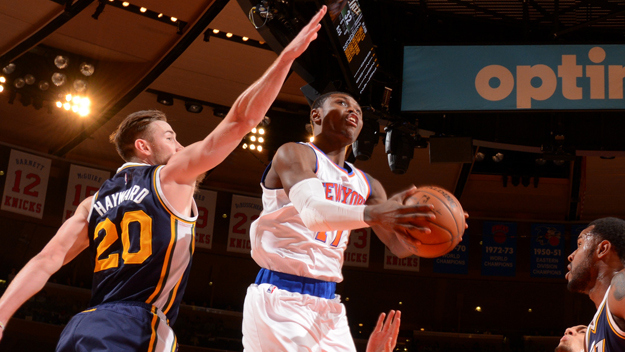 The attack happened around 4:30 a.m. after the 24-year-old Bronx native left the CityScapes Gentlemen's Club in Queens, the station reports.

His Uber cab was surrounded by at least two other cars and as many as six men got out, law enforcement officials told the Associated Press. The men were armed and masked, reports CBS New York. Early handed over two gold chains before he was shot in the right kneecap, said the officials, who spoke on the condition of anonymity, because they were not authorized to release the victim's name.

He was taken to Elmhurst Hospital, where he underwent surgery. His injuries are not considered life threatening.

Police were searching for suspects and trying to determine if it was a carefully planned attack or a spur-of-the-moment hit.

"We are aware of what occurred with Cleanthony Early this morning and are relieved that he is not in a life-threatening situation. We will not comment any further until we receive more information," the team said in the statement.

"We talked to our guys about the situation, just reminded them how serious this is and that there are certain things that come with being visible in terms of being a public figure," he said.

He told them: "Continue to try to be as vigilant and as careful as you can knowing that you can't always avoid other people's choices."

Early, who starred in college at Wichita State, was selected in the second round of the 2014 draft, but has struggled to make an impact in the NBA. During his first two seasons, he has been shuttled back and forth between the Knicks and the organization's Development League team in Westchester.

The robbery was the second time a Knicks player was robbed this month. On Dec. 20, forward Derrick Williams allegedly lost up to $750,000 in jewelry and other valuables after bringing two women home from a nightclub.