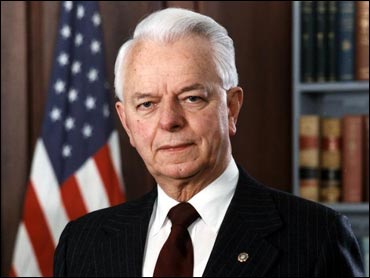 Sen. Robert C. Byrd's new memoir reveals both his encyclopedic knowledge of political history and the unlikely inspiration that helped launch his own political career: A Grand Dragon of the Ku Klux Klan.

It was a Klan leader who motivated the young Byrd during his short-lived tenure in the racist organization — something he writes was "an extraordinarily foolish mistake" that has haunted him for 40 years.

"It has emerged throughout my life to haunt and embarrass me, and has taught me in a very graphic way what one major mistake can do to one's life, career and reputation," the West Virginia Democrat says in an autobiography being released Monday. "I displayed very bad judgment, due to immaturity and a lack of seasoned reasoning."

It's a mistake he has paid for time and again, the only significant scandal ever attached to a man who grew up in Wolf Creek Hollow and who next June stands to become the longest-serving senator in U.S. history.

Even now, with the 2006 election more than 18 months away, Republicans are using it in their campaign to oust him. Byrd has not declared whether he will run again, and his book gives no hints.

"Robert C. Byrd: Child of the Appalachian Coalfields" chronicles his 87 years, from boyhood to his re-election in 2000. But at 770 pages, the $35 paperback from West Virginia University Press is more weighty tome than light reading.

It portrays a man who is religious, socially conservative, respectful and respected — a man for whom a promise is an unbreakable bond. But it is more the chronology of a career than the story of a man, dispassionately detailing virtually every federal dollar brought to West Virginia.

According to Citizens Against Government Waste, he's helped secure $1.6 billion for the state just since 1999. But any reader expecting an apology will be disappointed. Byrd is proud of supporting a state that suffered more than most through economic recessions — long exploited for its natural resources and slower than most to attain prosperity.

"The Washington critics of 'pork' had a full-time job in trying to keep up with me," he writes.

Byrd says the book is intended to tell the story of the place he holds dear, the state he says grew up alongside him as the money trickled in.

More than his own, "it's a West Virginia story," he told The Associated Press. "And it's still unfolding. There are still chapters ahead.

"I want to try to get our young people to understand that if I can do it, they can do it, too. Poverty doesn't need to hold anyone back," he said.

The book reflects Byrd's appreciation for political history, but the private man remains private, revealing little of his heart. One exception lies in his explanation of the folly with the Klan.

As a boy, he watched a parade of white hoods in Matoaka, learning years later his father had been among them. Back then "many of the 'best' people were members," he says, and Byrd was vulnerable to the anti-Communism rhetoric.

He recruited 150 members, and when Grand Dragon Joel L. Baskin came to a meeting in Crab Orchard, Byrd was unanimously elected Exalted Cyclops.

"You have a talent for leadership, Bob," Baskin told him. "The country needs young men like you in the leadership of the nation."

"Suddenly lights flashed in my mind!" Byrd writes. "Someone important had recognized my abilities. I was only 23 or 24, and the thought of a political career had never struck me. But strike me that night, it did.

"It was the appealing challenge I had been looking for. Wolf Creek Hollow seemed very near and Washington very far away, with the road in between all uphill," he says. "But I was suddenly eager to climb the mountain."

He belonged to the Klan for a year, then moved in 1943 to Baltimore to help build ships.

Byrd says he never resented blacks, Catholics or Jews, but he failed to "examine the full meaning and impact of the ugly prejudice behind the positive, pro-American veneer."

"My only explanation for the entire episode is that I was sorely afflicted with tunnel vision — a jejune and immature outlook — seeing only what I wanted to see because I thought the Klan could provide an outlet for my talents and ambitions."

Byrd has been married 68 years to high school sweetheart Erma Ora James, who pushed her congressman husband to earn a law degree with 10 years of night school.

She has backed Byrd through many careers, from butcher, salesman and welder to his first foray into public life. Byrd won a seat in the House of Delegates in 1946 and has not lost since. In 1952, he was elected to the U.S. House, and he went to the Senate in 1958.

The book suggests he deals with his family as he does the world, with reverence and commitment.

In 1958, 15-year-old daughter Margie drafted her first "constituent to senator" letter, complaining Byrd had not delivered a dog she had been promised. She gave him a week to make good, threatening to report his failure to the newspapers.

That day, she got her dog.