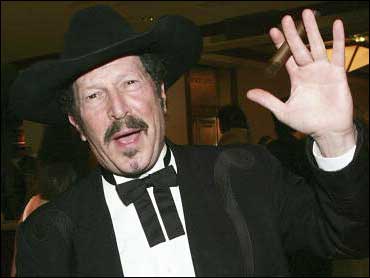 "I saw miles and miles of Texas, all the stars up in the sky..." sings a well-known Texas music maker.

Of all those bright Texas stars, reports Correspondent Lee Cowan on CBS News Sunday Morning, that music maker is one with a mouth like a sailor, a wardrobe like Johnny Cash, and a cigar like Winston Churchill. And he's got cowboys talking and politicians nervous.

He's Kinky Friedman, as much a part of the Lone Star state's landscape as cattle and sagebrush, who's now decided the Texas governor's mansion would be a fitting place to hang his hat.

And if you think Mississippi was offended, stick around. Friedman has made a career of shooting from the lip.

Everything, and everyone, is fair game, Cowan says.

Answering a reporter's question at a recent news conference, Friedman said, "I support gay marriage because I believe they have right to be just as miserable as the rest of us!"

His candidacy may sound like a joke, Cowan says. He may even look a bit like one at times. But he's counting on a change in attitude in Texas politics, summed up flatly by longtime humorist Molly Ivins this way: "On the matter of Kinky for governor, my response is, why the hell not!"

After all, notes Cowan, he does have his positions, and certainly his passions.

On education: "Our teachers are getting screwed, blued and tattooed by this system, and our government does not seem to care about what's happening to them."

On the death penalty: "I am not anti-death penalty, but I'm damn sure anti-the-wrong-guy-getting executed."

He's even got a pretty clear fiscal policy: "Before he died, an accountant asked my father, 'What are you financial goals?' And he said, 'My financial goals are for my last check to bounce!' "

Friedman laughed, "And that's pretty much my financial abilities, too."

Texas Monthly Editor Evan Smith, who allows Friedman a column every month, says it may well be the most interesting campaign Texas has seen in years.

"He speaks his mind," Smith says. "He is proud to be politically incorrect. He offends people almost as a matter of chemicals in his body. He can't help himself."

And some voters can't seem to get enough of it.

While Cowan was there, the phone rang off the hook with strangers offering campaign slogans.

"Got a new campaign slogan," Friedman says with a laugh. " 'Kinky Friedman, he never broke his word to the Indians.' "

"You getting a lot of suggestions like that?" Cowan asks.

He invited Cowan out to his boyhood ranch in the Texas Hill Country, where he lives with his four dogs, who he lovingly calls "The Friedmans."

He was cooking bacon for them when Cowan arrived.

Quite frankly, Cowan concedes, he expected a day full of entertaining one-liners, but ones largely empty on substance.

But, Cowan adds, he found someone much different.

He's actually someone oddly serious, Cowan observes, who's devoted much of his adult life to offering second chances.

At the Utopia Rescue Ranch, he's saved more than 1,000 dogs and cats from being euthanized, strays who now live on his ranch until they're adopted.

Nancy Parker, who runs the place, says what donations don't cover, Friedman pays for out of his own pocket: "That guy, besides rescuing animals, he will not tell you this, but he rescues people. And he's rescued more than you could imagine."

But Friedman's under no illusions that a big heart may not be received very well in the world of big politics. He admits his candidacy is "a long shot, sure. It's Don Quixote. No question about it. But we picked a big enemy. The enemy is not the governor. The enemy is the whole system, the whole paper, plastic, same old, politics as usual. If you're tired of that, you vote for Kinky."

Friedman does move to a different beat, Cowan says, in more ways than one.

If you've already heard of Friedman, it's probably because of his music.

Some call it country, some call it satire, a lot of people call it distasteful.

His song, "They Ain't Making Jews Like Jesus Anymore" raised as many eyebrows as it got toes tapping.

The only thing that seemed to irritate people more was the name of his band: Kinky Friedman and the Texas Jew Boys.

He even jokingly compared himself to Jesus on stage: "Neither of us actually held a job during our lives. We both just traveled the countryside basically irritating people." That line got laughs.

Says columnist Ivins: "He's exactly who he says he is. He is a Texas Jew Boy. And he's just as Jewish as he is Texan, and there's no contradiction."

His father, Tom Friedman, once said that he wasn't too fond of the "Jew Boys" name his son chose for the band but, he says, it did exactly what Kinky wanted it to do ... shock people.

"I said, 'That's a terrible name. It's a negative, hostile, peculiar thing, and if you called somebody that, it would be an insult,' " Tom Friedman says. "He said, 'That's great. That's what I wanted.' "

Which, it seemed, he wanted with his lyrics too.

There were ones such as, "You uppity women, I don't understand, why you have to go and act like a man."

"Get Your Biscuits in the Oven and Your Buns in the Bed" offended a lot of women, but sold a lot of albums.

Friedman soon grew a cult following. Tens of thousands wanted to "get Kinky." Among them, Willie Nelson.

They did several songs together, traveled together, and he remains one of Friedman's confidants.

In fact, Friedman has promised Nelson a job in the governor's mansion if he's elected.

But, says Cowan, Friedman's fan base really grew when he really started writing. Not lyrics, but mystery novels with himself as the main character.

"It's a lotta books," Friedman said to Cowan. "I can't believe I wrote all this stuff."

Everything from, "The Love Song of J. Edgar Hoover" to "Road Kill," a murder mystery about his travels with Nelson, which made it on the New York Times bestsellers list.

There were nearly two dozen comic mysteries in all, which attracted a whole new following, most notably Bill Clinton, who liked Friedman so much he invited him to the White House.

And Mr. Clinton says Friedman rewarded him with a gift: "We're standing in this huge crowd, and Kinky Friedman pulls out this Cuban cigar, which is still illegal in America you know, and he said, 'I want you to have this, Mr. President.' I said, 'Do you know what you're doing to me?' … Everyone is looking at me. There's like 50 or 60 people staring around. He says, 'Don't think about it as helping their economy, think of it as burning their fields.' And the whole crowd just cracked up."

Next month, Simon and Schuster, a subsidiary of Viacom which also owns CBS, will release "Ten Little New Yorkers." It will be Friedman's 18th and last novel.

He'll be trading in book tours for campaign stops or, as he likes to say it, literature's loss will be politics' gain.

But those closest to him worry his sarcastic wit, irreverent gestures, and distain for being politically correct may overshadow the man they know.

Friends such as fellow composer Billie Joe Shaver know it's probably going to get ugly, quickly: "The political people are going to throw hardballs and curves and all kind of things at him, and trash, and anything you can think of."

"Of course," says Shaver. "It happens all the time. They throw tomatoes at him on his own stage anyway!"

So, comments Cowan, say what you will about Friedman's sense of music, his timing, his dress, his manners, his politics, even his cigar. He is what he is, and even if he doesn't win, he's certainly going to have an impact.

"It would be a marvelous way to make some really effective points about the inanity of the political process, the stupidity of the speeches one repeatedly hears, and the lack of real ideas in Texas government," Ivins says. "It would just be a ball!"

Editor Smith chimes in that, "Kinky is not plastic. Kinky is real. And at a very gut level, he connects with those people. And I think, whether it's Willie Nelson and Dwight Yoakam or the man on the street in some small town, Kinky speaks to them. And that's why he ultimately cannot be written off."

"I wanna do the best I can for the people of Texas," Friedman asserts, "and I want that to be in a place that's above politics. That's a beautiful place if we can find it, and I think we can."

And perhaps, Cowan says, nowhere is that more likely than somewhere in the vast elbowroom of Texas.

As the song goes, "I saw miles and miles of Texas, gonna live here 'til I die, all right!"