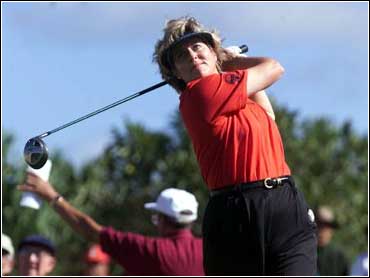 Betsy King saw it slipping away.

Without a victory in three years, King got off to a fast start and big lead in the final round of the Hawaiian Ladies Open.

Four birdies on the front nine of Kapolei Golf Course put the LPGA Hal of Famer at 14 under with nine holes left. But three bogeys on the next five holes and six birdies by Joanne Morley left King with a one-shot edge.

However, Morley bogeyed and double bogeyed the next two holes, and Brandie Burton, who birdied four of her last five holes, ran out of time.

King birdied 17 to end the suspense and her drought, winning her 32nd tournament and $97,500 on Saturday.

King, who entered the final round tied with Sally Dee at 10-under 134, shot 2-under 70 to finish at 204, two shots better than Burton and three ahead of Morley.

"I thought I was going to be tied at the 15th, but then I knew Joanne was having problems," King said. "Once I got to 17, I saw that Brandie was at 10-under and I was kind of surprised.

"I felt better after that birdie on 17."

It was a redeeming victory for King, the LPGA career money earner with more than $6.4 million, who had begun wondering whether she would win again.

"It's not really a relief, but more of an appreciation. I am proud of the way I hung in there."

King birdied three of the first four holes, missing an eagle on No. 3 after hitting two feet short of the pin from 95 yards. The birdie on No. 4 moved her to 14 under.

Dee dropped six shots back with a double bogey on No. 6, and Sophie Gustafson, who started the day one shot behind King and Dee, made four bogeys to fall out of contention.

"The front side I played very well," King said. "The back side, it was just the tee shots. Any bogey I made was just because of the tee shot."

Morley lost her momentum, making bogey on 15 and double bogey on the 16th.

"On 15, I hit what I thought was quite a good shot, but it ballooned in the wind," Morley said. "Sixteen was probably the worst iron I hit all week. I just hit right into the bunker, not a very good lie, and the rest is history."

The 44-year-old ing said she felt her experience was a factor playing with Dee and Gustafson. Neither has a tour victory.

"I think they were just in awe of being in contention," she said. "Sally said on the second green that it was an honor to be playing with me. That made me feel old."