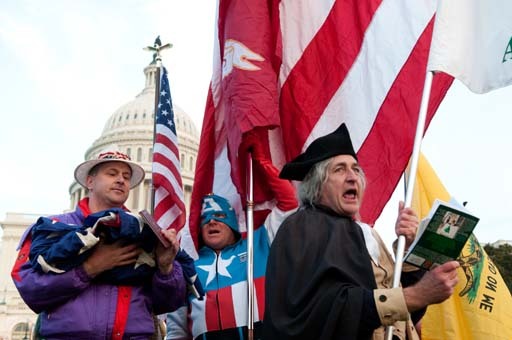 A budget agreement reached late Friday night avoided a shutdown of the federal government when Democrats and Republicans agreed to $38.5 billion in cuts from the 2011 budget - more than half of the $61 billion Republicans had been seeking. Conservatives were not successful in their bid to defund Planned Parenthood, defund the president's health care law, or restrict the EPA.

House Speaker John Boehner claimed victory: "I'm pleased that Senator Reid and I and the White House have been able to come to an agreement that will, in fact, cut spending, and keep our government open," he said.

Final passage of that short-term spending bill came around 12:20 a.m. in the House.

Rep. Steve King, R-Iowa, was one of the 28 Republicans who voted against the budget compromise.

On "The Early Show on Saturday Morning," King said Republicans held their ground as long as they could to try to get what he said was his priority: cutting off funding for the president's health care reform law.

"I've taken the stand all along, for a year, that if Republicans win the majority, we must first vote to repeal 'Obamacare,' and then use all of our leverage and every appropriations bill to cut off the funding that would be used to implement or enforce it," King told anchor Erica Hill. "Two federal courts have found it unconstitutional. The White House is delaying the Supreme Court review of this, while tens of billions are spent implementing a piece of legislation that America has rejected, and I believe the Supreme Court will also reject, and I thought we should have used our leverage in order to cut off all funding."

When asked if Boehner failed because the final agreement did not remove funding for the health care law, King said, "Well, I wouldn't go so far as to say that. He had a different set of priorities. A lot of political capital was used on the cuts. And by the time we got through that, we just didn't have enough leverage left to work on what I thought was the most important issue, and I think history will show that."

"Would you have rather seen, this morning, then, a government shutdown?" Hill asked.

"In the long run, we needed to be able to face a government shutdown and hold our ground - it's worth it," King replied. "That's $2.6 trillion in outlays the first full ten years of Obamacare. And if we're not willing to face the threat of a shutdown, which was being threatened of course by Harry Reid and discussion was initiated there, you're not as strong in your negotiations if you're not willing to use the tools that the other side is using. They were willing to use the shutdown. We were not. I think we could have gotten more if we would have been willing to face a shutdown."`

King said he believes that, if the government had been forced to shut down, the American people would side with him and Republicans holding out for more cuts.

King said the experience shows the power of the Tea Party movement.

"There's a tremendous amount of leverage there," he said. "There are 87 freshmen in this Congress. Quite a few of them are here because of the support of the Tea Party. I think we'll see the next vote, a little bit stronger Tea Party. And then they've got to be engaged with the members of Congress in a personal way.

"I think they're going to get strong and stronger. And I know they're looking to the 2012 election now. So, we will see, as days and weeks and months unfold, this is not a one-shot deal. They know it and we know it."

King also talked of the upcoming debate about the 2012 budget, which includes the proposal by Republican Paul Ryan that seeks to cut $4.4 trillion in government spending over the next decade, including a restructuring of Medicare/Medicaid, repealing the health care reform law, and lowering tax rates for the wealthy and corporations.

"You know, that's something that concerns me a lot about this - that you always want to use the highest leverage point to be able to achieve your most difficult goal. And so as we move forward, the Ryan budget will be debated, but it doesn't have the force and effect of law, so it's just a debate point," he said.

King then predicted the Democratic Senate leader would try to block debate on the Ryan proposal, leading to inaction and yet another threat of government shutdown.

"We will go through 12 or 13 appropriations bills. I think we'll debate them intensively in the House, and I think Harry Reid will put them in his desk, take none of them up until the last week in September where he'll put them all in one big omnibus spending bill, make his changes and add his money and drop that on our desk at the end of September and we'll be at another crisis of the threat of another shutdown."