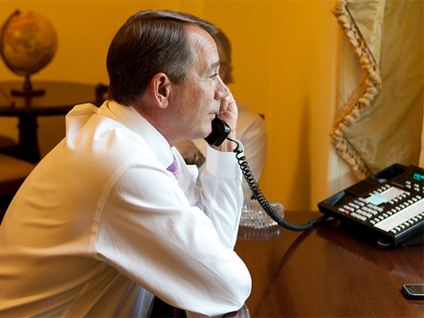 Lawmakers announced late Friday they had reached a compromise deal to avert a government shutdown just hours before the shutdown would have taken effect.

"Tomorrow, I'm pleased to announce that the Washington Monument, as well as the entire federal government, will be open for business," President Obama said around 11:00 p.m., just one hour before the midnight deadline.

Had lawmakers not reached a deal, the government would have seen its first shutdown in 15 years.

"Both sides had to make tough decisions and give ground on issues that were important to them, and I certainly did that," he said. "Some of the cuts we agreed to will be painful; programs people rely on will be cut back; needed infrastructure projects will be delayed; and I would not have made these cuts in better circumstances. But beginning to live within our means is the only way to protect those investments that will help America compete for new jobs."

In a statement, Republican House Speaker John Boehner and Democratic Senate Majority Leader Harry Reid said: "We have agreed to an historic amount of cuts for the remainder of this fiscal year, as well as a short-term bridge that will give us time to avoid a shutdown while we get that agreement through both houses and to the President."

"We will cut $78.5 billion below the President's 2011 budget proposal, and we have reached an agreement on the policy riders," they said. "In the meantime, we will pass a short-term resolution to keep the government running through Thursday. That short-term bridge will cut the first $2 billion of the total savings."

Mr. Obama's 2011 budget proposal was never passed; the actual cuts in the bill were about $38.5 billion for the current fiscal year.

The riders to which Reid and Boehner refer included a GOP rider to to defund Planned Parenthood, which Reid had suggested had been the final sticking point in negotiations. Republicans wanted to scrap about $300 million in federal grants that go to 4,500 different clinics around the country, about a quarter of them run by Planned Parenthood. That rider was not included in the final deal, but as part of the agreement a standalone bill on the matter will get a vote.

Mr. Obama said Democrats made sure that "at the end of the day this was a debate about spending cuts, not social issues like women's health and the protection of our air and water." Republicans had also sought to keep the Environmental Protection Agency from regulating greenhouse gas emissions.

"These are important issues that deserve discussion, just not during a debate about our budget," the president said.

Reid, appearing on the Senate floor shortly after the announcement, said the agreement on the policy riders had "not been easy."

Speaking of the last-minute deal, Reid said, "we didn't do it at this late hour for drama, we did it because it's been very hard to arrive at this point."

"This is historic what we've done," he added.

Boehner said in brief remarks he was "pleased" at the deal. In a closed-door meeting with his caucus before the announcement, one lawmaker told CBS News, he told fellow House Republicans he had negotiated the best deal possible.

Following the announcement, the House and Senate passed a short-term bill tonight to keep the government funded through next Friday. They plan to pass the longer-term compromise bill to fund the government for the rest of the fiscal year mid- to late next week.

The House vote on the short-term bill was 338-70, with 28 Republicans and 42 Democrats voting no. The Senate passed the bill in a voice vote.

Boehner faced pressure from the Tea Party not to compromise with Democrats on spending cuts. Amid reports a deal had been reached, Tea Party Nation's Judson Phillips Tweeted, "Boehner is selling us out tonight. We will primary Boehner next year."

Sarah Palin also pressured the GOP not to compromise before the vote, Tweeting, "GOP: don't retreat! The country is going broke. We can't AFFORD cowboy poetry & subsidizing abortion...If we can't fight to defund this nonsense now when we have the chance, do you think we'll win the big fight on entitlement reform later on?"

Sen. Rand Paul of Kentucky, a Tea Party-linked freshman, voted against the short-term funding bill late Friday night. He said "it does not set us on a path to fixing the spending and debt problems our country is facing. As I have said before, there is not much of a difference between a $1.5 trillion deficit and a $1.6 trillion deficit - both will lead us to a debt crisis that we may not recover from."

At issue in the overall discussions is funding for the federal budget for the rest of Fiscal Year 2011, which lasts another six months. House Republicans passed a bill including $61 billion in cuts earlier this year, but the Democrat-led Senate rejected the bill, saying the cuts went too far.

Lawmakers from both parties insisted they wanted to avert a government shutdown, but they could not reach an agreement as the deadline approached. They had earlier passed a pair of short-term budget deals as they had tried to come to agreement on a longer-term deal.

Negotiators worked feverishly to avert a shutdown, which would have meant the furlough of hundreds of thousands of federal workers, the closure of national parks and federal agencies and the suspension of pay for members of the military. It would also have delayed small business loans and mortgage applications.

President Obama, who delayed a family trip to Williamsburg, Virginia planned for this weekend because of the standoff, said it would have been inexcusable not to reach a deal. Both Democrats and Republicans had sought in recent days to pin the blame on the opposition in the event of a shutdown.

The rhetoric was particularly acrimonious on Friday, with Reid saying he was "personally offended" that the GOP had dug in on the Planned Parenthood issue, a position he called "indefensible."

This fight, dramatic as it has been, may just be a warm up. The parties are expected to but heads in coming months over raising the debt ceiling as well as a budget for the next fiscal year, which is expected to include some degree of reform to entitlement programs like Medicare and Medicaid.