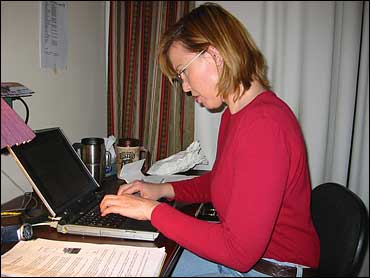 CBS News correspondent Kimberly Dozier underwent an operation Friday to begin repairing her legs. Dozier is being sedated to lessen the discomfort, but is still able to talk to her family.

Earlier Friday, she was taken off her respirator and was breathing on her own.

Dozier remains in critical but stable condition at Landstuhl Regional Medical Center in Germany, where she is resting comfortably.

"She is talking well, hasn't lost her sense of humor, and was disappointed that we had to meet in Landstuhl, Germany, instead of over a drink in New York City," CBS News President Sean McManus said in a message to CBS employees.

The coffins with the bodies of Brolan and Douglas were flown on Thursday from Kuwait to London's Heathrow Airport, where a ceremony was held with their families and close friends. Their arrival was honored in a simple, moving ceremony; their plain wooden coffins draped in the Union Jack, CBS News correspondent Mark Phillips reports.

Dozier was seriously wounded Monday by a car bomb in Iraq that killed Douglas and Brolan. Her mother said Dozier is "going to have to have rods in her legs; they were pretty badly injured."

It is expected that Dozier will be stable in the next couple of days and she will be transported to an appropriate medical facility in the United States on Sunday.

"She has to be stable enough to sustain the flight," Shaw said.