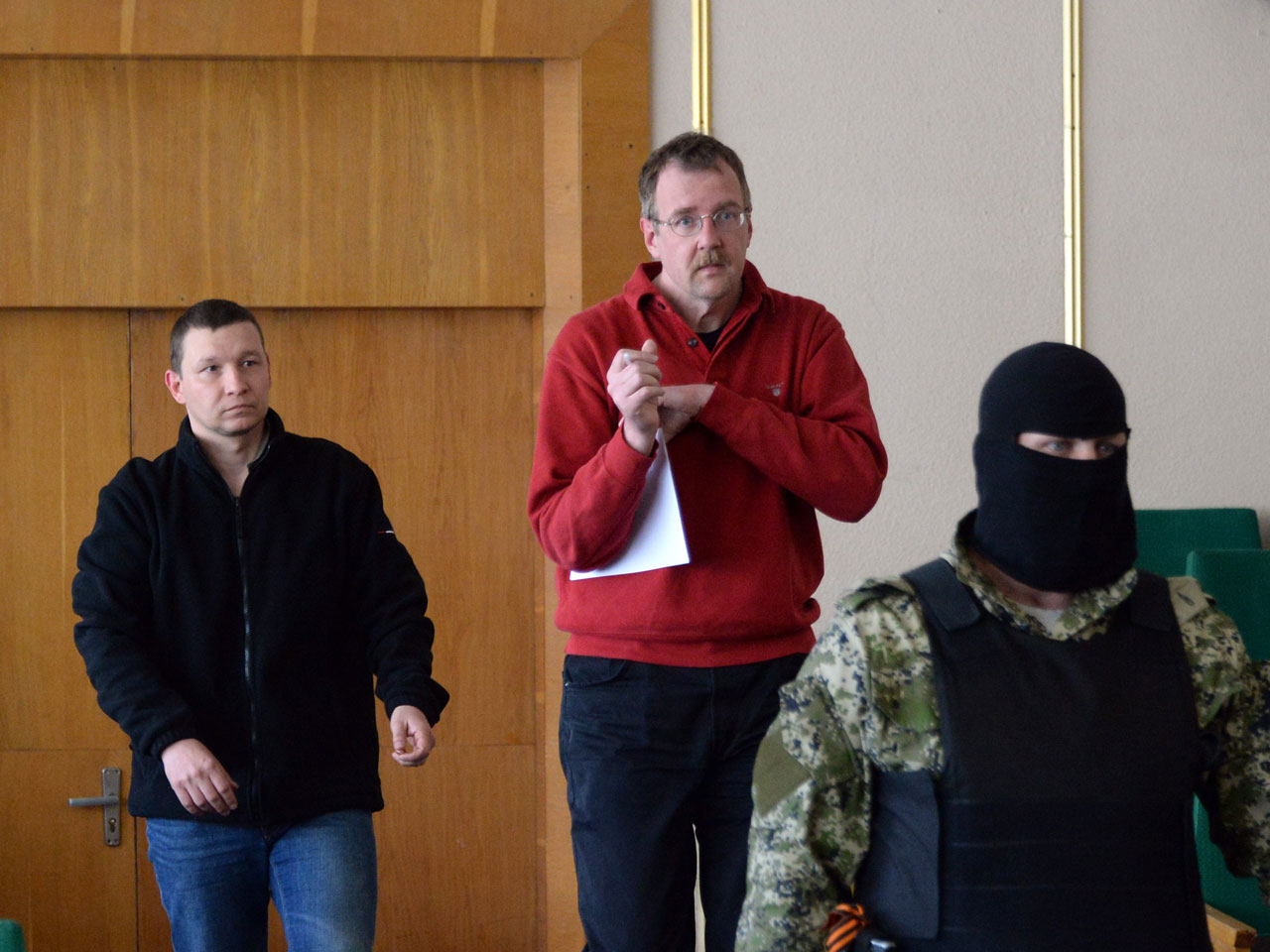 SLOVYANSK, Ukraine - Pro-Russia insurgents on Sunday freed one of the eight European military observers being held prisoner in eastern Ukraine, citing medical reasons. Earlier in the day, all eight appeared in public for the first time and, under armed guard, gave assurances they weren't being mistreated.

Meanwhile, a crowd of pro-Russia activists stormed the television broadcasting center in Donetsk, and a White House official said the U.S. and its Western allies will unveil new sanctions this week that target Russian President Vladimir Putin's inner circle.

The crowd of several hundred pro-Russia activists that stormed the television broadcasting center in Donetsk, the regional capital of eastern Ukraine, demanded that Russian state channels be put back on the air.

The Kiev government last month blocked the broadcasts of the Russian channels, which serve as propaganda tools for the Kremlin.

The crowd included several dozen men wearing camouflage fatigues and face masks, the standard uniform of the pro-Russia forces that have seized government buildings in at least 10 cities in eastern Ukraine.

Elsewhere in eastern Ukraine, the insurgents in Slovyansk have taken a number of people hostage, including journalists and pro-Ukraine activists, as they strengthen their control in the east of the country in defiance of the interim government in Kiev and its Western supporters. On Sunday, they captured three Ukrainian security service officers, who were shown to Russian journalists bloodied and blindfolded with packing tape.

Col. Axel Schneider from Germany, who spoke for the group of military observers, stressed that they were on a diplomatic mission under the auspices of the Organization of Security and Cooperation in Europe when detained Friday and weren't spying for NATO, as the insurgents claim.

The observers, who appeared nervous, were in the custody of armed men wearing camouflage fatigues and black balaclavas, who escorted them into the Slovyansk city hall for the news conference and led them away afterward. Schneider, however, said they were being treated as well as possible under the circumstances.

"The mayor of this city granted us his protection and he regarded us as his guests," Schneider told journalists in Slovyansk, which has become the center of the pro-Russia insurgency in eastern Ukraine. "I can tell you that the word of the mayor is a word of honor. We have not been touched."

German foreign minister Frank-Walter Steinmeier condemned the trooping of the observers under armed guard as "revolting." He said the appearance was "a breach of all the rules" and violated the men's dignity.

An Associated Press photographer saw Maj. Thomas Johansson of Sweden get into a car with representatives of the Organization of Security and Cooperation in Europe. They then drove away from the city administration building in Slovyansk, which has become the center of the pro-Russia insurgency in eastern Ukraine.

Johansson was "released on humanitarian grounds as he has a mild form of diabetes," said Stella Khorosheva, a spokeswoman for the city's mayor.

Steinmeier called on Russia to pressure the separatists into releasing all of the prisoners "as soon as possible." In addition to three German officers and a civilian interpreter, the group also includes officers from Poland, Denmark and the Czech Republic.

The German colonel said he understood that the self-proclaimed mayor, Vyacheslav Ponomarev, could use the observers as a bargaining chip.

"Our presence here in Slovyansk is for sure a political instrument for the decision makers here in the region and the possibility to use it for negotiations," Schneider said. "It's logical in the eyes of Mayor Ponomarev that he can use us to present his positions."

Ponomarev said Saturday that the European observers could be released in exchange for jailed pro-Russia activists. Late Sunday, a Swedish member of the observers was released because he is a diabetic, according to reports.

The mayor has refused to specify how many Ukrainian journalists and activists his forces have detained, but he suggested it was several dozen.

On Sunday, the insurgents captured three Ukrainian security service officers, who were shown to journalists in the security service headquarters in Slovyansk. Stripped of their trousers and shoes, they sat with heads bowed.

Igor Strelkov, who has been identified as the commander of the armed insurgents, said the three Ukrainian officers were on a mission to seize leaders of the pro-Russia force when they were captured.

Ukraine's Security Service confirmed that its officers had been seized by armed men. The officers were on a mission to detain a Russian citizen suspected in the killing of a Ukrainian parliament member, the agency said in a statement.

The Ukrainian government and the West have accused Russia of using covert forces to encourage the unrest in eastern Ukraine, where pro-Russia militias have seized police stations and government buildings in at least 10 cities and towns.

The U.S. and other nations in the Group of Seven have announced plans to impose additional economic sanctions on Russia in response to its actions in Ukraine. The European Union also is planning more sanctions, with ambassadors from the bloc's 28 members to meet Monday in Brussels to add to the list of Russian officials who have been hit by asset freezes and travel bans.

The White House said Sunday new penalties are expected this week against Russia for its action against Ukraine will affect the people closest to Russian President Vladimir Putin.

He told CNN's "State of the Union" that those around Putin "are going to be affected" by additional penalties expected to be announced early this week.

Earlier Sunday, President Barack Obama said in Malaysia that the U.S. would be in a stronger position to deter Putin once Putin sees the world is unified in punishing Russia.

12 civilians dead as Russia shells eastern Ukraine: "Every crime will be punished"