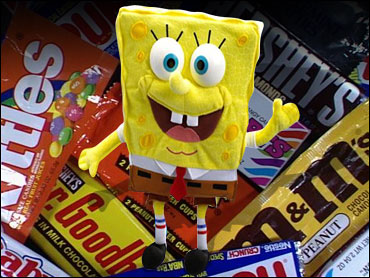 SpongeBob SquarePants, Shrek and other characters kids love should promote only healthy food, a panel of scientists recommended.

In a report released Tuesday, the Institute of Medicine said television advertising strongly influences what children under 12 eat.

The report said the food industry should spend its marketing dollars on nutritious food and drinks. That means SpongeBob, the popular animated star of the Nickelodeon cable TV network, and other characters should endorse only good-for-you food, the panel concluded.

"The foods advertised are predominantly high in calories and low in nutrition, the sort of diet that puts children's long-term health at risk," said J. Michael McGinnis, a senior scholar at the institute and chairman of the report committee.

The report said evidence is limited on whether TV advertising leads to obesity in children. A study hasn't been done that would demonstrate a direct cause and effect.

Still, the panel found the evidence compelling enough to call for a concerted effort to change the nature of foods being marketed to children, said panel member Ellen A. Wartella, psychology professor at the University of California, Riverside.

The growth in new food products targeted to kids has been huge, from 52 introduced in 1994 to nearly 500 introduced last year, the report said.

"Overwhelmingly, those foods are high-calorie, low-nutrient foods, not the kind of foods that are recommended for children to eat," Wartella said.

The findings were no surprise to Iowa Sen. Tom Harkin, who requested the report.

"We like to think that SpongeBob SquarePants and Shrek and the pretty little princesses are likable, kid-friendly characters, but they're being used to manipulate vulnerable children to make unhealthy choices," said Harkin, the senior Democrat on the Senate Agriculture, Nutrition and Forestry Committee.

"The industry must stop pushing junk food on our kids," Harkin said.

Viacom Inc.'s Nickelodeon in October announced a campaign aimed at persuading kids to eat healthy foods and to get up off the couch and move. The campaign features former President Clinton, SpongeBob SquarePants and Dora the Explorer.

Among children and adolescents from ages 6 through 19, obesity rates have tripled over the past 40 years. Obesity increases the risks of type 2 diabetes and many other diseases and health conditions.

In adults, a person who is obese has a Body Mass Index, or BMI, of 30 or more. Children are defined as obese according to a formula placing their BMI at or above the 95th percentile on government charts specifying age and gender. BMI shows body weight adjusted for height.

An advertising industry spokesman called the findings frustrating, because many companies have been reformulating products to make them healthier or reporting calorie and fat content on menu boards or packaging.

"There's a long way to go, but the industry is responding, and it doesn't seem like there's any recognition of that in this report," said Wally Snyder, president and CEO of the American Advertising Federation.

"Lack of physical activity is a major problem here on childhood obesity. And, in fact, the industry is heavily involved in special programs to educate parents and children about the need for good nutrition and physical activity," Snyder said.

The panel assessed hundreds of studies, then reviewed evidence from 123 of them and completed the most comprehensive review to date on the scientific evidence of how food marketing affects kids' diets.

While the research focused on TV advertising, the panel noted advertising is one facet of a marketing environment vastly different from the 1970s. It now includes Internet games, cartoon character endorsements, coupons and store events, product placement in supermarkets and organized word-of-mouth campaigns.

Advertising accounts for about one-quarter of what companies spend on marketing, the report said.

The panel said the government should use tax breaks and other incentives to encourage the shift away from junk food and said if it doesn't happen, Congress should mandate it.

An arm of the National Academy of Sciences, the Institute of Medicine is congressionally chartered to advise the government on medical issues.