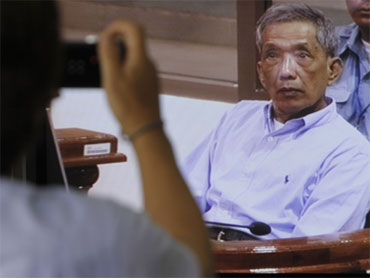 A U.N.-backed tribunal sentenced the Khmer Rouge's chief jailer to 35 years for overseeing the deaths of up to 16,000 people — the first verdict involving a senior member of the "killing fields" regime that devastated a generation of Cambodians.

Victims and their relatives burst into tears after learning that Kaing Guek Eav — also known as Duch — will actually serve only 19 years after being convicted of war crimes and crimes against humanity after taking into account time already served and other factors.

That means the 67-year-old could one day walk free, a prospect that infuriated many who have been demanding justice for victims of the regime that killed an estimated 1.7 million people between 1975-79.

"I can't accept this," said Saodi Ouch, 46, shaking so hard she could hardly talk. "My family died ... my older sister, my older brother. I'm the only one left."

More than three decades after the ultra-communist Khmer Rouge killed a quarter of Cambodia's population while trying to turn the country into a vast agrarian collective, Duch is so far the only person to face justice. The group's top leader, Pol Pot, died in 1998 and four other senior Khmer Rouge leaders are awaiting trial for their part in the deaths from execution, starvation, medical neglect and slave-like working conditions.

The U.N.-backed tribunal — 10 years and $100 million in the making — said it took into consideration the historical context of the atrocities: The regime was the product of the troubled Cold War times.

It also recognized that Duch, who headed Tuol Sleng, a secret detention center for the worst "enemies" of the state, was not a member of the Khmer Rouge's inner clique and that he had cooperated with the court, admitted responsibility and showed "limited" expressions of remorse.

During the 77-day proceedings, Duch admitted to overseeing the deaths of up to 16,000 people who passed through the prison's gates. Torture used to extract confessions included pulling out prisoners' toenails, administering electric shocks and waterboarding.

At least 100 people bled to death in medieval-style medical experiments.

One of the tribunal's international judges, Silvia Cartwright, said she understood that those who lived through the Khmer Rouge's reign of terror may be upset at the sentence.

"That's one of the reasons that we have an objective tribunal ... fixing as balanced a sentence as we can," she said. "If left to the victims to decide how to punish a person, then it would be, possibly, mob rule."

"You have to bear in mind that victims are very deeply hurt and traumatized," she added. "We can never give them what they lost ... so a sentence can only ever be symbolic in a way."

The prosecution and defense have one month to appeal.

Unlike the other defendants, Duch (pronounced DOIK) has several times asked for forgiveness, even offering at one point to face a public stoning. But his surprise request on the final day of the trial to be acquitted and freed left many wondering if his contrition was sincere.

"He tricked everybody," said Chum Mey, 79, one of just a few people sent to Tuol Sleng prison — code-named S-21 — who survived. The key witness wiped his eyes. "See ... my tears drop down again. I feel like I was victim during the Khmer Rouge, and now I'm a victim once again."

Duch, sitting rigidly in a crisp light purple shirt and starring into the distance, showed no emotion as he listened Monday to the judge talk about the court's findings.

Judges noted that the jailer was often present during interrogations at Tuol Sleng and signed off on all the tortures and executions, sometimes taking part himself. He said the court had rejected arguments that he was acting on orders from the top because he was under duress or feared for his own life.

"In carrying out his functions, he showed a high degree of efficiency and zeal," the judges wrote. "He worked tirelessly to ensure that S-21 ran as efficiently as possible and did so out of unquestioning loyalty to his superiors."

A former math teacher, Duch joined Pol Pot's movement in 1967, three years before the U.S. started carpet-bombing Cambodia to try to wipe out Northern Vietnamese troops and Viet Cong inside the border. By 1976, he was the trusted head of its ultimate killing machine, S-21.

After a Vietnamese invasion forced the Khmer Rouge from power in 1979, Duch disappeared for almost two decades, living under various aliases in northwestern Cambodia, where he had converted to Christianity. His chance discovery by a British journalist led to his arrest just over a decade ago.

Though the tribunal has been credited with helping the traumatized nation speak out publicly for the first time about atrocities committed three decades ago, it has been criticized as well.

The government insisted Cambodians be on the panel of judges, opening the door for political interference. It also sought to limit the number of suspects being tried — fearing, some say, it would implicate its own ranks. The prime minister and other current leaders were once low-level members of the Khmer Rouge.

Though most people doubted Duch would get the maximum life imprisonment, few expected he'd get less than 35 years in jail. The decision to shave 16 years for time already served and illegal detention in a military prison means he has 18 years and 10 months left.

That's around two days in prison for every person who died under his watch.

More than 1,000 villagers showed up for the verdict, some traveling more than 180 miles (300 kilometers) by bus.

"It's just unacceptable to have a man who killed thousands of people serving just 19 years," said Theary Seng, a human rights lawyer who lost both of her parents and has been working with others to find justice.

An international civil rights lawyer and associate fellow of the Singapore Institute of International Affairs also criticized the court's "unimaginative" reparation order, which was limited to simply publishing the judgment. Mahdev Mohan said the U.N.-backed tribunal could have ordered Duch to build a memorial to the victims and to do other work to deter future crimes against humanity.

Among those at Monday's verdict was New Zealander Rob Hamill, the brother of one of a handful of Westerners killed by the Khmer Rouge. Kerry, then 28, was sailing across Asia when his yacht was captured in Cambodian waters in 1978. He was taken to Tuol Sleng and killed.

Another brother committed suicide months later, and their mother died seven years ago.

"All I can say is my family, who are no longer here to see justice, would not want to see this man set free, even if it's in 19 years time," said Hamill, 46, struggling to contain his emotion. "It's reality but I'm not happy... he should not be a free man."