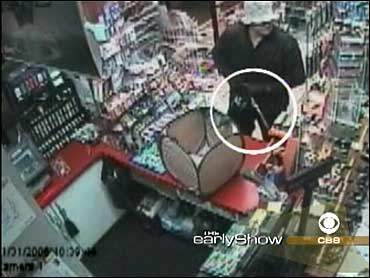 When they first heard that a ransom note had been found, the father and son team of handwriting experts John and Paul Osborne were certain that the 370-word trail would lead straight to the killer of JonBenet Ramsey. They were wrong. CBS News 48 Hours Correspondent Erin Moriarty reports on the story behind this closely-analyzed letter, and on the complex field of writing analysis.

"What shocked me more than anything else was the idea that someone would go in a stranger's home and commit a crime as horrific as this particular crime and then sit down in the kitchen and write out two pages," says John Osborne. "If it wasn't a person who was intimately familiar and comfortable with the home, then it was a person who had a heck of a lot of nerve."

"It would be among the most primary pieces of evidence that an investigator would want considered in trying to identify who it was that committed the crime," Osborne said.

Ransom notes played an instrumental role in the Lindbergh baby kidnapping case, in which 12 to 13 ransom documents were found.

Paul's father and grandfather, pioneers in handwriting analysis, identified the writer of those notes. That man was later convicted in court. Unfortunately, in the Ramsey case, the ransom note has not been the big break authorities hoped for.

The problem: While JonBenet's father has been excluded as the author of the note, her mother has not. Sources tell 48 Hours that two analysts hired by the Ramsey family have ruled out Patsy Ramsey as the author. But state experts contend that while they can't say with certainty she wrote the note, they can't eliminate her either.

The reason may be that the author of the ransom note disguised his or her handwriting. "It appears the note at least from this copy begins in a fashion which could be described as writing that is tediously executed, and ends up with writing that appears to be more rapidly and freely executed," says John.

Today, Ramsey case investigators may be looking not only to handwriting experts, but to a man who believes it's not how you write but what you write that identifies you. "The vocabulary, the grammatical feature and so forth can now be shown to be genuinely distinctive of Shakespeare in a way not even closely matched by any other poet," says Donald Foster, a literature professor at Vassar College in New York.

Foster volunteered to help the Ramsey case investigators. He uses computers to analyze the content of documents to determine authorship. In 1995, he discovered that journalist Joe Klein was the anonymous writer of "Primary Colors" In 1997, he tied Theodore Kaczynski to the "Unibomber Manifesto."

He then turned to the Ramseys. He won't discuss his work in that case, but in trying to analyze the content of the ransom note, Foster had to contend with some phrases which seem to be borrowed from scripts of famous feature films.

For example, one lne boasts, "If we catch you talking to a stray dog, she dies." This sounds a lot like the movie Dirty Harry, in which one character said, "If you talk to anyone, I don't care if it's a Pekingese pissing against a lamppost, the girl dies."

Foster compared the ransom note to the writing style of suspects. Last summer, he gave investigators what the handwriting experts could not: a report, sources tell 48 Hours, that ties Patsy Ramsey to the ransom note.

But not everyone agrees with him. Sue Bennett, for one, says she has the evidence to prove Foster is wrong. How would a 47-year-old housewife from North Carolina know so much about this professor in New York? It's a bit of an odd story, and it begins on the Internet.

Like many Americans, Bennett became fascinated with the Ramsey case. She spent hours online discussing it. There she met Professor Foster. Bennett says that in May of 1997, a writer using the screen name "Jameson" caught Foster's attention.

There were literally hundreds of statements posted by Jameson, and this person seemed to know a lot about the murder and the Ramseys.

After analyzing Jameson's writings, Foster identified the writer as the 20-year-old half-brother of JonBenet: John Andrew Ramsey. And then, Foster went even further. In a letter dated June 10, 1997 to a literary agent, Foster announced he had solved this Colorado crime, naming John Andrew as the prime suspect, even though police had cleared the young man three months earlier.

So who is Jameson? Jameson is Sue Bennett.

"Somehow, this man who can tell everything from analyzing text had thousands of my pages of text, and determined that I could be a pedophile into S&M interests, who would murder a six-year-old child with a garrotte," says Bennett. "And I was devastated that somehow, something I did, said, would make him think that I could be that person."

Foster responded to Bennett's accusations in a letter to 48 Hours, saying he had just been speculating and had "never publicly accused anyone of anything." But this amateur Internet detective feels she has to speak out.

"If he was wrong with all my samples, I don't believe that there's any way that anyone should give him any credibility now judging Patsy Ramsey," says Bennett.

This matters only if the grand jury reads Foster's report and acts on it. At that point, the two-and-a-half page ransom note could once again become the crucial piece of evidence in the case.