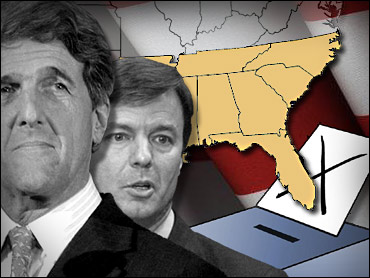 
John Kerry's selection of North Carolina Sen. John Edwards as his running mate tilts the presidential election to the Democrats' favor, based upon the electoral map.

Edwards' presence on the ticket puts part of the solid South in play for the Democrats, marking an ambitious change in strategy.

Even if the Democrats again fail to win a Southern state, the Kerry camp believes Team Bush will be forced to spend additional time and money to defend this GOP bastion. Evidencing the claim on Wednesday, President Bush was in North Carolina.

"It is very hard to see how Bush can win without sweeping the South as he did in 2000," said political scientist Merle Black of Emory University. "Choosing Edwards is a bold strategy because it puts the Republicans on the defensive."

President Bush won all 11 of the original Confederate states in 2000. Three of those states -- Arkansas, North Carolina and Louisiana -- are now in play. Kerry's chances of winning the most important Southern state, Florida, have also increased with Edwards on his ticket. The Massachusetts senator is also looking stronger in the traditionally Democratic border state of West Virginia.

The Bush-Cheney campaign is already fighting back. On Wednesday, Mr. Bush was speaking to values in Edwards' home state of North Carolina. That same day, the Kerry campaign announced that for the first time it would run advertising in North Carolina, officially adding it to the count of battleground states.

The ad refers to Edwards as the "son of a mill worker" gone advocate "for ordinary people." Utilizing this biography, in addition to his engaging speaking style, Edwards hopes to woo Southern voters. And although Mr. Bush remains the favorite in North Carolina, Edwards did win his senate seat against the odds. He's certain he can do it again.

"If Bush lost North Carolina that's the end of Bush," said Larry Sabato, a professor of political science at the University of Virginia.

The challenge for Mr. Bush is this: If Kerry and Edwards hold the states won by Democrats in 1992, 1996 and 2000, that equals 260 electoral votes. It takes 270 electoral votes to become president. North Carolina has 15 electoral votes, Louisiana 9, Arkansas 6 and West Virginia 5.

Kerry-Edwards likely win the White House if they win two of the three contests in Louisiana, Arkansas or West Virginia. The Democrats also likely win if North Carolina goes for Kerry-Edwards.

This calculation doesn't even count Florida -– a must-win state for Mr. Bush.

"They will use Edwards a lot in north Florida (traditional Republican turf)," said political scientist Black." "And with Edwards on the ticket, he will go over well in Arkansas as well."

Even prior to the selection of Edwards, the voting habits of three states tended to favor Kerry. In West Virginia, two of three congressmen are Democrats, as are both senators and the governor.

In Arkansas, three of four congressmen are Democrats, as are both senators. The governor is a Republican.

Of Louisiana's congressmen, three of seven are Democratic. Yet both senators are Democrats, as is the state governor (Since 1896, 22 of 24 governors have been Democratic).

Nevertheless, there is more than one way to do political math in the South. In presidential elections, for example, Democrats have won only nine Southern states since 1980 -- despite the fact that Jimmy Carter, Bill Clinton and Al Gore are all sons of the South.

"Edwards can be as charismatic as he wants, but he would have to be the Pied Piper to change people's voting habits," said Sabato.

But Sabato agreed that it would only take North Carolina, or a combination of a few small Southern states, to turn the election.

Kerry and Edwards are scheduled to appear in their first joint TV interview on 60 Minutes, Sunday, July 11, at 7 p.m. EDT/PDT

"Kerry picked Edwards with some hope that it will help in North Carolina," said Rep. Robin Hayes, R-NC. "[Kerry-Edwards] certainly have the potential from the standpoint only that people will sometimes vote with the home town guy."

But foreshadowing part of the GOP attack strategy, Hayes added: "I think there has been ... dissatisfaction over the last year and half over the lack of attendance from [Edwards]."

Republicans are also countering Democrats by contesting states that are historically blue (Wisconsin, Minnesota and Pennsylvania).

During the Democratic primaries, Kerry focused on a strategy of possibly winning the election without the South.

"Everybody makes the mistake of looking South," Kerry said in New Hampshire.

But the Boston Brahmin has clearly changed his mind.