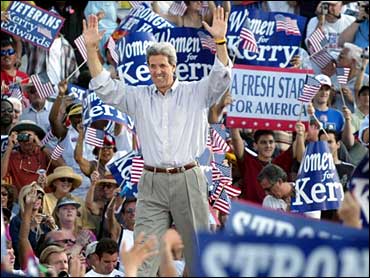 The clash erupted as the polls made the race for the White House a close one, seemingly tilting Bush's way despite debates that bolstered his Democratic rival's standing.

"God, there's so many polls," lamented the president's brother, Gov. Jeb Bush of Florida. "I mean, it's like you could just be obsessed with focusing on that rather than the reason to support somebody," he said on ABC's "This Week."

The governor acknowledged that the race in Florida will depend on voter turnout, reports CBS News Correspondent Joie Chen.

"The hurricanes hit some places that are bedrock Republican areas, and these folks are really hurting. And a lot of people don't consider politics their first priority right now," he said.

After a campaign that has exposed deep differences between the two candidates over the war on terrorism, Iraq, the economy and more, Kerry and Bush hoped not.

The president took a day off from campaigning. While his rival was in Ohio and Florida, Bush readied what aides called a major speech on terrorism for Monday in New Jersey, where millions live within sight of the terrorist-scarred lower Manhattan skyline.

With the White House as his campaign backdrop, the president-candidate also was signing a $33 billion measure for homeland security.

Increasingly, Republicans and Democrats alike were focusing on voter mobilization efforts in a dozen or so states that remained competitive.

Not surprisingly, Florida got special emphasis as Democrats sought to avenge the bitterly disputed recount that propelled Bush to the presidency in 2000.

Democratic vice presidential candidate John Edwards urged members of a black congregation at Greater Friendship Baptist Church in Daytona Beach to take advantage of early voting as soon as it opened on Monday.

"There's no reason to wait till November the second," said the North Carolina senator.

Florida's vote counting debacle of 2000 has been an issue for many of the state's black voters.

Gov. Bush said the White House was considering a policy change that could affect the state. The administration is considering a temporary halt in the deportation of Haitians fleeing their country because of recent severe hurricane damage, he said, an issue of importance to the state's Haitian population. Kerry called for the step to be taken last week.

Kerry talked about Social Security from the pulpit of the Mt. Olivet Baptist Church in Columbus, Ohio, citing a report in The New York Times Magazine that quoted Bush as telling supporters that "privatizing Social Security" would be high on his second-term agenda.

He called it Bush's "January surprise," and said it may be good for "the wealthiest people and the well connected in America, but it's a disaster for America's middle class."

Citing estimates from the Congressional Budget Office, Kerry said Bush's plan would mean "benefit cuts for seniors of between 25 percent and 45 percent. That's up to $500 less for food, for clothing, for the occasional gift for a grandchild," he said, and vowed anew not to cut benefits or raise the retirement age if elected.

Bush has long advocated overhauling Social Security to allow younger workers the choice of putting a portion of their payroll taxes into private accounts.

Aides also have said that current Social Security beneficiaries and those approaching the age of eligibility would not be required to accept any changes in the current system.

But implicit in any such modification is the need either to replace or offset the money that will begin flowing to private accounts rather than traditional Social Security. Estimates run into the trillions of dollars over several years.

Purely in political terms, Republican survey data long ago discovered that voters recoil at the use of the word "privatize" in connection with either Social Security or Medicare.

With Bush taking a campaign day off, his surrogates leapt to his defense.

Gillespie said the account of Bush's remarks was a "second-hand report and it is just flat inaccurate." Appearing on CNN's "Late Edition," he also said it was based on "hearsay." Gillespie said he often attends events such as the one cited, but added he couldn't be certain whether he had been at the one featured in the story.

"John Kerry's misleading senior scare tactics are just another example of a candidate who will say anything to get elected," said spokesman Steve Schmidt, "no matter how false his accusations or how contradictory they are with his record of repeatedly voting for higher taxes on Social Security."