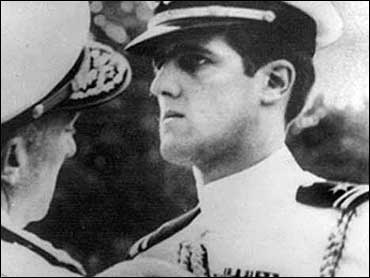 John Kerry's campaign posted some of his military records on the Internet after critics questioned the combat injuries that earned him three Purple Hearts and an early exit from Vietnam.

The first records posted Tuesday night on Kerry's campaign Web site documented the awards that have been a highlight of Kerry's biography as the Democrat seeks to oust President Bush in November.

During nearly five months as the commander of a Navy swiftboat in the Mekong Delta, Kerry was awarded the Bronze Star for heroic achievement, the Silver Star for gallantry in action and three Purple Hearts for injuries that included shrapnel wounds to his arms, legs and buttocks.

Conservatives, talk radio hosts and some newspaper editorials have questioned the seriousness of his injuries and whether the Massachusetts senator was deserving of the three Purple Hearts, which resulted in his reassignment out of Vietnam.

Besides the citations and certificates posted on the Internet, Kerry's campaign provided The Associated Press with declassified reports that briefly explain the injuries that led to Kerry's final two Purple Heart awards.

The campaign could not locate a similar report for Kerry's original Purple Heart. As evidence that Kerry was wounded, campaign spokesman Michael Meehan showed The Associated Press a "Sick Call Treatment Record" from Kerry's personal files that included a brief written note dated Dec. 3, 1968, and stamped from the naval support facility at Cam Ranh Bay.

"Shrapnel in left arm above elbow. Shrapnel removed and appl (sic) bacitracin dressing. Ret to Duty," it said. The note is followed by a signature that appears to say "JCCarreon" and some illegible letters that Meehan said probably designate the medical official's rank.

Meehan said the campaign would allow a reporter to see the record at the campaign's headquarters, but not take a copy. He said it would not be made available to the public because Kerry considers it a private medical record.

Documentation for the other two injuries shows that Kerry was deemed to be in good condition and returned to active duty after treatment. The documentation does not describe the severity of the injuries.

The military regulations for awarding the purple heart specify that it is awarded when a service member is wounded or killed as a result of action involving a hostile enemy.

"A wound is defined as an injury to any part of the body from an outside force or agent … A physical lesion is not required, however, the wound for which the award is made must have required treatment by a medical officer and records of medical treatment for wounds or injuries received in action must have been made a matter of official record," the regulations read.

"When contemplating an award of this decoration, the key issue that commanders must take into consideration is the degree to which the enemy caused the injury," the regulations continue. Unlike other decorations, a soldier, sailor or Marine need not be nominated for the Purple Heart — it is earned once the conditions are met.

After the third Purple Heart, the Navy was required to reassign Kerry out of Vietnam, and a document dated March 17, 1969, said Kerry requested duty as a personal aide in Boston, New York or the Washington area. Kerry could have volunteered to stay in Vietnam, but left the country in early April 1969.

Along with his final Purple Heart, Kerry received the Bronze Star after being wounded by the mine. One of his boatmates was thrown overboard in the blast, but Kerry pulled him to safety.

Kerry did this with "his arm bleeding and in pain and with disregard for his personal safety," according to the citation. Kerry and the man who went overboard, retired Los Angeles police officer Jim Rassmann, had an emotional public reunion in January, two days before Kerry would win the Iowa caucuses.

Democrats have been touting Kerry's decorated service during the wartime presidential race and contrasting it with President Bush's lack of combat experience.

"We are happy to compare Senator Kerry's record of service to anybody in the Bush campaign who has or has not served," Meehan said.

The White House said the documents comprise his entire military record. The records did not provide evidence that Mr. Bush attended drills while in Alabama during a period when Democrats have questioned whether he reported for service. The records did include a dental examination at an Alabama military facility.

When asked about the questions surrounding his Purple Hearts Sunday on NBC's "Meet the Press," Kerry said all his military records are available to the public. Meehan said Kerry requested a copy of his record from the Navy last month and received roughly 150 pages last week. He said the entire file would be posted online.

In other campaign news: