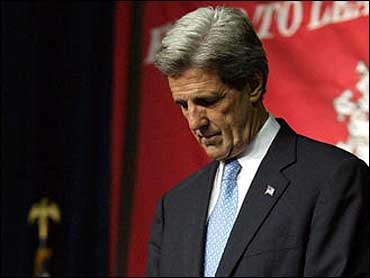 "We lost one of our great optimists," Kerry told graduating seniors at Bedford High School. "President Reagan's belief in America was infectious. And because of the way he led, he taught us that there was a difference between strong beliefs and bitter partisanship."

Kerry's campaign said it was canceling all public events through Friday, including star-studded fundraising concerts scheduled for Monday in Los Angeles and Thursday in New York.

Kerry called Reagan "the voice of America in good times and in grief." He remembered Reagan's tribute to the men who fought at Normandy on D-Day - whose 60th anniversary was Sunday - his challenge to bring down the Berlin Wall and his poignant remembrance of the Challenger space shuttle astronauts.

"Free men and women everywhere will forever remember and honor President Reagan's role in ending the Cold War," Kerry said. "He really did believe that communism could be ended in his lifetime, and he helped to make it happen. Perhaps President Reagan's greatest monument isn't any building or any structure that bears his name, but it is the absence of the Berlin Wall."

Kerry's speech to the school's 372 graduates was scheduled to mark the D-Day anniversary, and he went ahead with the appearance despite Reagan's death Saturday at age 93 after a 10-year battle with Alzheimer's disease.

As the Massachusetts senator remembered the 40th president and the "greatest generation" of World War II, he encouraged the students to serve their country and "find the greatness that's in you."

"I wish, just as I wished for my own daughters on the day of their graduation and just as your parents sitting here today wish for you, that they could send you out into a world of peace, a world of justice, a world that is fair and free for every person on this Earth," Kerry said. "But we know that it's not our world. Not yet. Your generation, like generations before, like all the generations that have written American history will face great challenges, and you will find, as you already have, that life brings setbacks as well as success, hardship as well as hope."

Although Bedford High School is in Temperance, Mich., the commencement was held across the state line at the University of Toledo.

Kerry came to the graduation after receiving a letter from Brandon Spader, a graduating senior and editor of the student newspaper who told of the area's sagging economy and requested an interview. Spader also requested an interview with President Bush, but said he did not get a response.

The graduates seem to have embraced Kerry's call to serve their country in this time of war. Student council President Suzanne Johnson said the class of 2004 has more students headed for the military than any in Bedford's history. Spader is among them, with plans to attend the U.S. Air Force Academy.

Kerry canceled the week's campaign trips to Colorado, California, Arizona and New York, but will travel to Los Angeles Tuesday and Wednesday to attend daughter Alexandra's graduation from the American Film Institute and a screening of her 15-minute film, "The Last Full Measure." He plans to spend of the rest of the week in Washington, where Reagan's body was being flown on Wednesday.

Kerry and the Democratic National Committee were canceling joint fund-raising concerts that were to feature Barbra Streisand, Neil Diamond, Billy Crystal, Robin Williams, Whoopi Goldberg, Bette Midler, Jon Bon Jovi, John Mellencamp and others. Tickets cost as much as $1,000. New dates will be announced when the concerts are rescheduled, Kerry's campaign said in a statement.

Separately Sunday, The Miami Herald reported that Kerry said he would, if elected, encourage "principled travel" to Cuba and lift the cap on gifts to its people. In an interview conducted Friday, Kerry said he backed the U.S. trade embargo against Cuba and support for dissidents. But he criticized Bush's restriction of travel and cash gifts to Cubans as a "cynical and misguided ploy for a few Florida votes."

Florida, site of the decisive recount in the 2000 presidential election, has nearly 500,000 Cuban-American voters. Four in five supported Republican Bush in the last election, which was decided by just 537 votes.