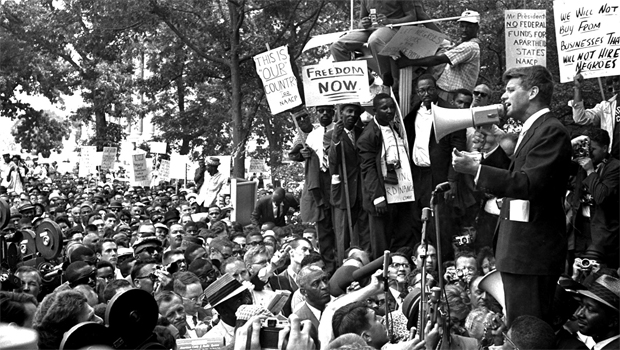 Some of my earliest memories are of visiting my father, Robert Kennedy, at the Justice Department during the height of the civil rights movement. After one of those visits in the summer of 1963, my father wrote me a letter that I still have today. It reads:

Dear Kerry,
Today was an historic day, not only because of your visit. A few moments ago, over the objections of the Governor, two Negroes integrated the University of Alabama. I hope these troubles will be over long before your pretty little head is at college.

That afternoon, President John F. Kennedy decided to propose a civil rights bill on national television. Almost unanimously, President Kennedy's advisors counseled against the speech. Only one supported his decision: my father. Robert Kennedy didn't just encourage the president to give the address; he urged him to treat the issue not as one of politics, but as one of morality.

President Kennedy took his brother's advice. "We are confronted primarily with a moral issue," he told the nation that evening. "It is as old as the scriptures and is as clear as the American Constitution."

It speaks to the depth of my father's idealism that on the same day he sent National Guardsmen to stop the governor who was literally blocking the university's entrance and to protect two students who simply wanted an education, he could write a message of hope to his three-year-old daughter, and he could trust that the American people were ready to hear their president question the nation's ethical direction.

His optimism was well-placed. A year later, Congress passed the Civil Rights Act. And five years later, during his 1968 presidential campaign, Robert Kennedy predicted that within four decades there would be an African-American president -- a prediction which, in no small part because of his efforts, came true exactly 40 years later.

Our nation has traveled a remarkable distance since the tense summers of the 1960s. But for as much satisfaction as he would have taken in our progress, my father would have regarded President Obama's election as only a beginning, just as he regarded the Civil Rights Act as only a beginning. For we still live in a nation where poverty and hunger persist, where discrimination and persecution endure, and where justice and equality remain elusive for far too many Americans.