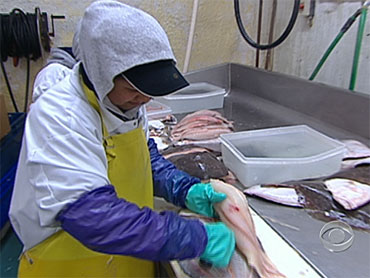 Sen. John Kerry warned, in a newspaper interview published Friday, that the military draft might be revived to replenish U.S. forces in Iraq if President Bush wins a second term.

Kerry told The Des Moines Register, "With George Bush, the plan for Iraq is more of the same and the great potential of a draft."

Mr. Bush vowed in the second presidential debate that, if he's re-elected, "We're not going to have a draft, period."

The president did not directly respond to Kerry's comment during a campaign appearance Friday in Cedar, Rapids, Iowa. But he said that he was "modernizing and transforming our United States military to keep the all-volunteer army an all-volunteer army."

Bush-Cheney campaign spokesman Steve Schmidt said Kerry's statement amounts to "fear mongering" and demonstrates "that he is a candidate will to do or say anything to score political points."

Kerry focused on pocketbook issues during a speech in Milwaukee, the first of a series of speeches aides described as the campaign's "closing arguments."

"Right now, we've got an economy where, for too many people, the American Dream is harder and harder to reach," Kerry told students at Milwaukee Area Technical College.

"Jobs are being shipped overseas," Kerry said, "and his administration says outsourcing is good for us. He's the first president to lose jobs in 72 years, and they say it's time to celebrate."

Kerry portrayed the president as out of touch with the everyday challenges facing families.

"George Bush has had four years to do something — anything — to create an economy where hard working Americans can live out their dreams," Kerry said. "The problem is, this president just doesn't understand what's happened to our economy."

"The bottom line is this," Kerry said, "this economy has a bad case of the flu and we need a new medicine.

The president said Kerry doesn't seem to understand the connection between jobs and education.

"In the final debate I talked about the vital link between education and jobs; the senator didn't seem to get it," Mr. Bush told supporters in Cedar Rapids.

Mr. Bush said good jobs begin with education and that Kerry "failed to recognize the changing realities of today's world and the need for reform."

The administration's programs for job retraining and accountability in the nation's schools have drawn strong criticism from the Kerry campaign, which says they are inadequately funded.

The president is taking a calculated risk by focusing on jobs. Though Iowa's unemployment rate is 4.5 percent, well below the national rate of 5.4 percent, the state has lost 28,000 jobs since Mr. Bush took office, with the Cedar Rapids area losing 10,000.

Mr. Bush flew to Iowa on the homestretch of more than a week on the campaign trail that included stops in St. Louis and Tempe, Ariz., for the last two debates. After his Iowa appearance, Mr. Bush was heading to Wisconsin.

Both candidates have scheduled a round of campaigning in Florida over the weekend, as they continue to crisscross the remaining battleground states.

The latest polls show the race remains extremely tight. A new poll by the Scripps Survey Research Center shows Kerry with a 50-45 percent lead over Mr. Bush among registered voters. However, Mr. Bush had a slight lead over Kerry among likely voters in the same poll. A Washington Post tracking poll has the race dead even, while a Zogby tracking poll gives Mr. Bush a 4-point lead.

A poll of military members and their families by the National Annenberg Election Survey shows Mr. Bush is more trusted to be commander in chief than Kerry, by a 69-24 margin.

Those in the military and their families have a more favorable view of the president than Americans generally, and they take a more optimistic view about Iraq, the economy and the nation's direction.