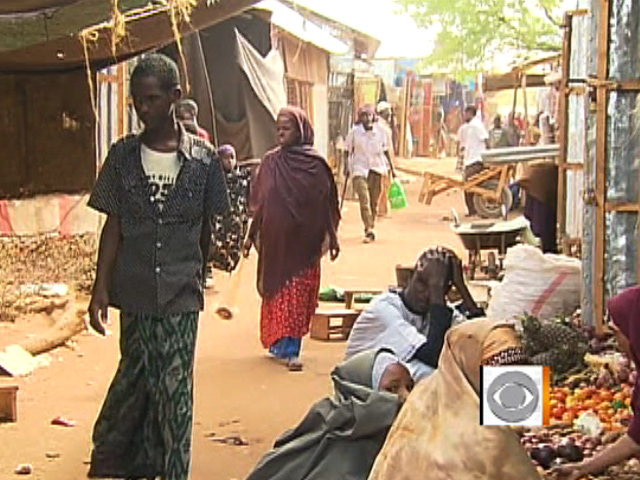 Every week, more than 5,000 refugees fleeing the famine and civil war in Somalia cross the border into Kenya and arrive at the Dadaab refugee camp, the world's largest.

But, reports "Early Show" co-anchor Erica Hill from the camp, it's important to remember that, once they get inside, there are people who've been living here since Dadaab and other camps were founded 20 years ago.

So, what have they made of their lives in Dadaab?

There are tents and makeshift shelters as far as the eye can see. Also donkeys pulling carts.

Not to mention a market - a twisting maze of plump vegetables, shiny cookware, fresh meats, even a tailor.

"This is not what people expect when they think of a refugee camp," Hill remarked. "This is a town."

"This is a town, yeah," Moulid, our interpreter, agreed, "because people have been living here for the past 20 years. And they made it another Mogadishu, because they accepted life here, so they need to make it better than it is."

The marketplace is nearly as old as the camp itself.

Moulid tells me some of the first businesses were established just after the refugees arrived in 1991, offering a chance to provide for their families, and regain a sense of normalcy.

"Wow," Moulid remarked, referring to a tailor. "He's only (in the camp three months). He's one of the new arrivals. And he's still he's using (his tailoring skill) to try to earn money."

Mohammed, at a cosmetics store, came to Dadaab when he was barely a year old -- he's grown up here, along with the marketplace. When he's not in school, he works in his brother's cosmetics shop, where he's gaining some real-life lessons in global commerce.

"The problem," says Mohammed, "is the economic crisis in the world," which he says even impacts business at the shop.

Moulid tells me the price of most items has doubled recently, a result of not only the drought, but the economic crisis around the globe. "Everything is affected," he says, "even down here in Dadaab."

Yet, this market isn't crashing any time soon.

And their resourcefulness, for turning this cam into a community.

Where to the people in the market get the money to go into business?

From Somalis who've moved elsewhere in the world. There's a large Somali community in Minnesota, for instance. Somalis send money back home, to relatives in the camps, and elsewhere, resulting in a very vibrant economy in the market in the camp.