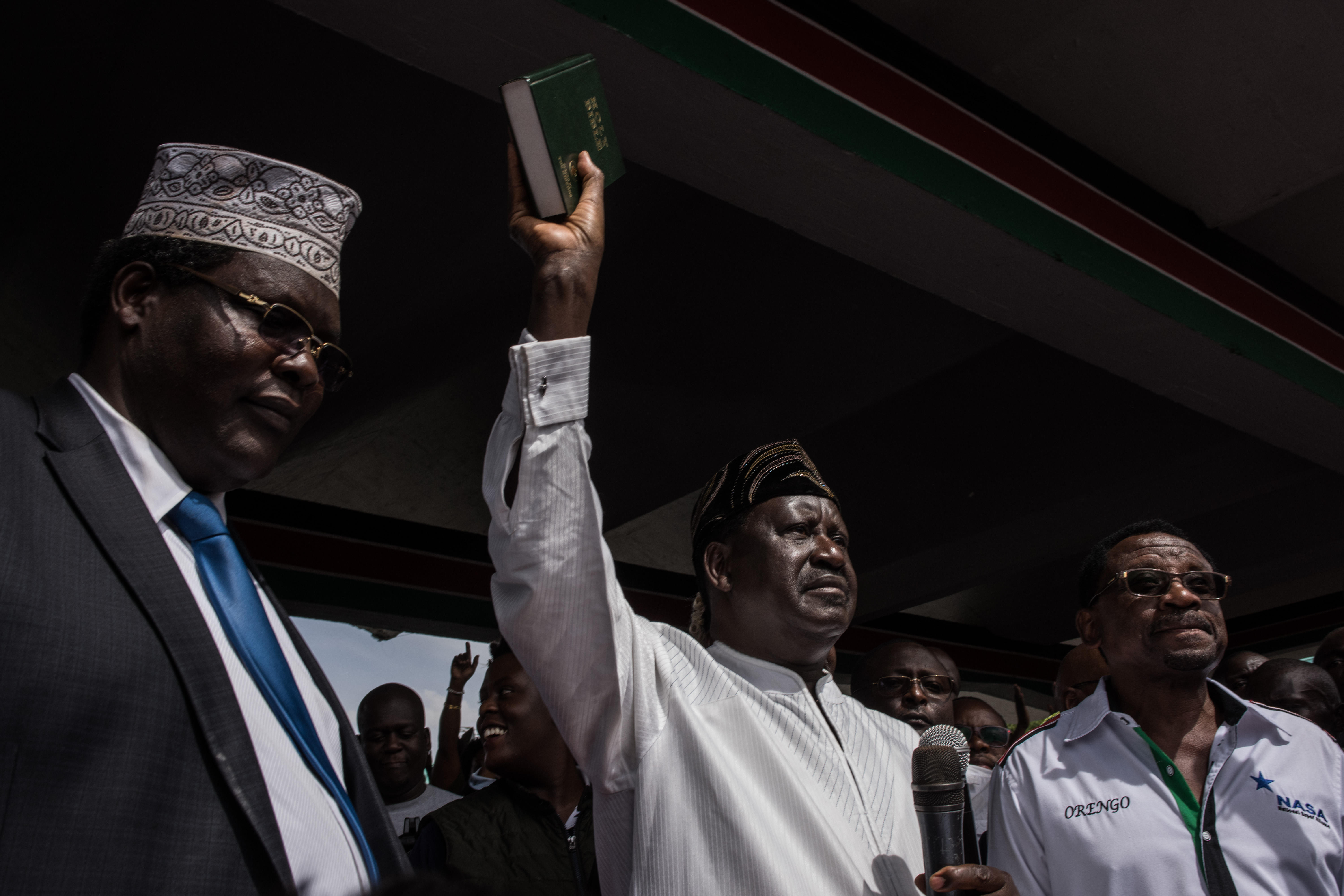 NAIROBI, Kenya -- Former Kenyan Vice President Kalonzo Musyoka said Wednesday that gunshots and a grenade were fired at his home in what he called "an assassination attempt," as a government shutdown of the top three TV stations continued the day after the mock inauguration of opposition leader Raila Odinga. The first arrest was reported as the government launched an investigation into the event's "conspirators."

Musyoka told The Associated Press that the attack occurred hours after his police security was withdrawn and he was blocked from attending the Odinga ceremony on Tuesday, which was meant to protest President Uhuru Kenyatta's new term after months of deadly election turmoil. Musyoka was to take the oath as Odinga's deputy as the opposition leader declared himself "the people's president."

Police spokesman Charles Owino confirmed that a stun grenade was hurled at Musyoka's home in the leafy Karen suburbs and two shots were fired from a rifle.

"The motive was clearly political," Musyoka said, describing the 1 a.m. blast as "shocking." He said he felt vulnerable after his police security was withdrawn and hired a private security firm. "I knew we were vulnerable but I didn't think they would strike that fast," he said.

No one was hurt. Musyoka said the private security firm vehicle parked in front of his gate may have dissuaded the attackers from entering the house.

Kenya's interior minister, Fred Matiangi, announced an investigation into "conspirators and facilitators" of Tuesday's event. The government has outlawed the opposition's National Resistance Movement, with Matiangi declaring it an organized criminal group. Membership in such a group can lead to imprisonment up to 10 years under Kenyan law.

"It is not a political party. It is a group of individuals who are based on mayhem and anarchy," the interior minister said Wednesday.

Shortly afterward, the lawyer for the man in judicial dress who stood by Odinga during the ceremony said he had been arrested. Peter Kaluma said opposition legislator and lawyer T.J. Kajwang was taken to the Nairobi's criminal investigations department for questioning.

The interior minister also said the top three TV stations and some radio stations will remain shut down while being investigated for their alleged  role in what he called an attempt to "subvert and overthrow" Kenyatta's government.

Matiangi claimed that the media's complicity in Tuesday's ceremony would have led to the deaths of thousands of Kenyans.

The government cut the live transmission of the country's top three TV channels Tuesday as a huge crowd of tens of thousands gathered in a Nairobi park for the mock inauguration.

Kenya's Supreme Court nullified the August election after Odinga claimed that hackers infiltrated the electoral commission's computer system and changed results in favor of Kenyatta. The ruling, citing irregularities and illegalities, was the first time a court had overturned a presidential election in Africa. The court ordered a fresh election in October that Kenyatta won and Odinga boycotted, claiming a lack of electoral reforms.

After Tuesday's ceremony, Odinga updated his Twitter profile to call himself "President of the Republic of Kenya."

Henry Maina, regional director of media rights group Article 19, called the shutdown of the TV stations a violation of constitutionally guaranteed media freedoms and the "lowest moment for media freedom in a decade." Meanwhile, the New York-based Committee to Protect Journalists called on Kenyan authorities to allow the TV stations to immediately resume broadcasting.