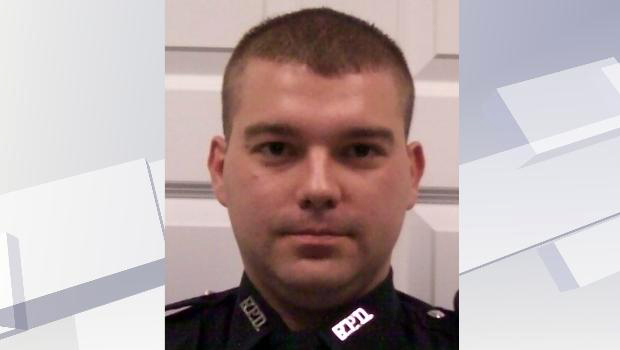 LOUISVILLE, Ky. -- A central Kentucky police officer died early Friday, two days after he was ambushed and shot in the head while searching an apartment for a robbery suspect, authorities said.

Richmond Police Officer Daniel Ellis, 33, died at the University of Kentucky Medical Center in Lexington, State Police Trooper Robert Purdy said in a written statement. The suspect, 34-year-old Raleigh Sizemore Jr., was an ex-convict who had absconded parole, according to records.

"It's just heartbreaking," Richmond Mayor Jim Barnes told The Associated Press. "It's an emotional time for everyone in the community. Those guys work so hard to protect the city."

Ellis, a seven-year veteran of the force, leaves behind a wife and 4-year-old son, police said.

His police cruiser, parked in front of the police department, has become a memorial for people to pay their respects.

"It's packed with flowers," said Richmond Police Major Steve Gregg. "People are driving by and telling us how sorry they are and that we have their support. That means a lot to us."

Ellis was a well-liked officer and in line for a promotion to detective, he said.

CBS Lexington affiliate WKYT-TV reports a long line of police cruisers lined up outside the hospital to transport Ellis' body to the state medical examiner's office in Frankfort. Hours later, another procession took the body to a funeral home in Richmond, driving at one point beneath an American flag that was unfurled over the street.

Ellis was shot Wednesday while searching for a man who tried to mug a woman in the parking lot of a downtown gas station. The suspect, Sizemore, had said he was determined not to return to prison, according to a police report.

Sizemore's criminal record, which begins shortly after his 18th birthday, includes a string of theft, drug and forgery charges, along with a series of convictions for driving under the influence.

He was often unruly, but not combative, said Berea Police Sgt. Jake Reed, who arrested him several times and watched him cycle in and out of jails and prisons.

In 2011, Sizemore was making meth in his parents' Berea apartment and set the curtains on fire, according to a report in The Richmond Register. Sizemore pleaded guilty the following year and prosecutors dropped charges against his parents, who Sizemore told authorities were unaware he was cooking the drug.

"I was making meth, done too much of it and freaked out," the newspaper reported he said at the hearing.

He was sentenced in April 2012 to 10 years on charges of manufacturing methamphetamine and criminal mischief, though paroled this April. He absconded supervision and a warrant was issued for his arrest last month.

His mother died in October and Sizemore was devastated, said friend Mary Richardson. On Tuesday, Sizemore showed her pictures of his mother, she said.

"He started bawling," she said.

The next morning, police say he jumped out of a van in a gas station parking lot with a gun in his hand and tried to steal a woman's purse. She fought him off and he fled.

Ellis and another officer tracked Sizemore to the apartment on Ballard Drive, where he was inside with two others, Gregory Ratliff, 25, and Rita Creech, 44.

As the police knocked, Sizemore declared that he had "spent half his life in prison and not going back," according to the police report, which says that he told Ratliff "not to let them in or he would shoot him."

Sizemore allegedly took Creech into the back bedroom as Ratliff answered the door. Ratliff told the officers no one else was there and there were no guns in the house, and gave them permission to search.

The report alleges that Sizemore shot Ellis in the head "as soon as he began to cross the threshold of the bedroom door."

The second officer returned fire and struck Sizemore, who was treated at the hospital and handed over to police.

Sizemore was charged Wednesday with attempted murder of a police officer. That's expected to be upgraded Friday, following Ellis' death. He is being held at the Kentucky State Reformatory.

Meanwhile, the town of 32,000 is left reeling. Ellis' wife is an assistant principal at Madison Central High School, where students are wearing blue T-shirts and decorating the school in blue ribbons in a show of solidarity. Citizens are raising funds to help the family.

"Both Katie and Officer Ellis are wonderful people who truly serve the community of Richmond," Drew Muntz, the high school principal, said in an email message. "They are both great examples of servant leaders."