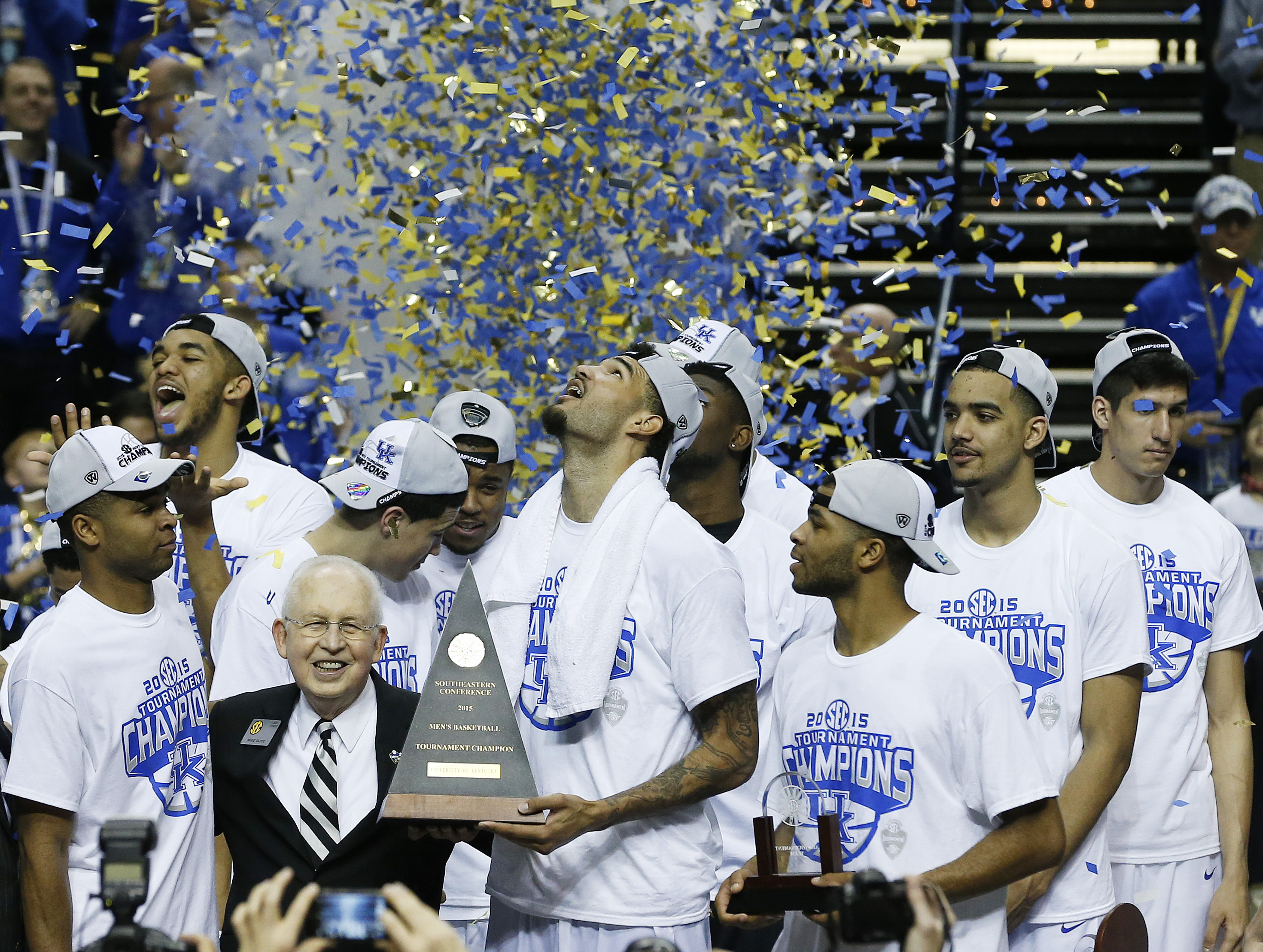 NASHVILLE, Tenn. - The top-ranked Kentucky Wildcats have a 34-game winning streak and yet another Southeastern Conference Tournament championship as they head into the NCAA Tournament.

So they sent student managers to cut down the nets.

And perfection just may be the side product.

Cauley-Stein scored 15 points and grabbed 10 rebounds, and Kentucky never trailed in beating No. 21 Arkansas 78-63 on Sunday for the program's 28th SEC Tournament title.

Not that Kentucky sees being undefeated as a challenge.

"We're still only guaranteed one game, so it's really the slate is clean whether we're 34-0 or have got five losses," Cauley-Stein said. "It's still from here on out, you're 0-0."

Andrew Harrison also scored 15 points for Kentucky, and his brother Aaron had 11.

The Razorbacks (26-8) were trying to win their second tournament title and first since 2000. Michael Qualls, coming off the bench for only the second time this season, scored 18 points, while Bobby Portis, the coaches' pick for SEC player of the year, added 13 with a season-low two rebounds.

Unlike last season when Arkansas swept Kentucky, these Wildcats proved to be just too good. With coach John Calipari rotating Wildcats, they simply ran around the Razorbacks' usually stifling pressure defense or passed over them.

"Our guys came out and fought and scratched and clawed," Arkansas coach Mike Anderson said. "But at the end, I thought their depth and their size were hard to overcome."

With Nashville barely an hour's drive from Kentucky, the Wildcat faithful filled Bridgestone Arena with blue from courtside to the rafters for a tournament record attendance of 20,315. The Razorbacks had only a couple patches of family, friends and fans inside the building.

"You people are crazy," Calipari said after the game of seeing so much blue in the stands.

Kentucky rewarded those fans with the start they wanted, scoring the first eight points as Andrew Harrison hit two 3s early. Arkansas had not trailed in this tournament, yet against Kentucky the best the Razorbacks could do was tie the game four times with the last at 19-all on a 3-pointer by Qualls with 7:59 left.

By the time the Razorbacks worked the ball inside against Kentucky's blue wall, they struggled to knock down shots. After Qualls' 3, they didn't score another field goal the rest of the half. Kentucky scored seven straight as part of a 16-4 run to finish the half with a 41-25 lead.

"It was tough on some of our guys because they can just block your shot or they can just try to tip it a little bit," Portis said of the Wildcats. "Willie or Karl-Anthony (Towns), will come up with the ball then. So that's a big key for them and a big positive for their team."

Arkansas started the second half much better and got as close as nine points four times, the last on another jumper by Qualls, before Kentucky reeled off an 11-2 spurt. Cauley-Stein grabbed a rebound and his putback capped the run and gave Kentucky its biggest lead at 65-47.

From there, the Wildcats pushed the lead to as many as 21 points down the stretch.