Magic Johnson and Larry Bird were quite the basketball players in their day. Quite the competitors, too. Today they're the best of friends, and happy to talk about how that came to be. Jim Axelrod has the view from courtside:

It doesn't happen often in the world of sports . . . two great champions face off in their primes - and push each other to levels they would have never reached on their own. Think boxers Muhammad Ali and Joe Frazier. But they didn't become best friends.

Which makes the rivalry born 30 years on a basketball court, when Magic Johnson played Larry Bird for the college championship, a rivalry like no other.

"He was always smiling," said Bird. "And as I told Magic, my goal my whole career was trying to knock out his two front teeth," he laughed. "Then he wouldn't be smiling so much."

"When I saw Larry, I wasn't smilin'," Johnson replied. "Now, normally, I have a nice big smile. But Larry Bird took that smile right away."

During his Hall of Fame career playing for the Boston Celtics, Larry Bird was a one-man highlight show of dazzling no-look passes and last-second, buzzer beaters. No one was better when the game was on the line.

Magic Johnson ran the fast-breaking, high-flying show-time offense of the L.A. Lakers to 5 NBA championships with sleight of hand and a joyful exuberance.

"I always thought he was, like, a step ahead of everyone else," Bird said. "His intelligence was above and beyond anyone else I've played against."

They both grew up poor in the Midwest . . . Johnson in Lansing, Michigan, Bird the pride of French Lick, Indiana.

As a teenager, Bird wore out this backboard, nailed to the garage of his childhood home. He practiced endlessly, heeding a warning from his high school coach:

"In the summer, we was always on the courts and one night, it was getting late, and he came by," Bird recalled. "And he knew we'd been there for a long time. And that's when he said, 'No matter what you do out here, there's always somebody doing a little bit more.' "

"Did you believe him?" Axelrod asked.

"I believed him. And he was right. It was Magic," Bird said. 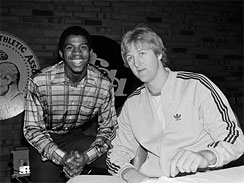 "He looks like a guy who just got off a dump truck - I mean, hair not combed or brushed. He sloppy dresses, so everything is wrinkled. Larry Bird does not look like a basketball player," Johnson said.

"And we started scrimmaging, man, did he come alive. It was like a new guy, another person. And man, could he play basketball."

"It didn't matter. At that time, it didn't matter. His hair wasn't combed, his sock bein' dirty. Tennis shoes bein' old. Oh my goodness! And what you did with Larry Bird, you just sat there, your mouth just was open like, 'Wow. . . '"

"You know, I can remember going home and telling my older brother that I'd just seen the best basketball player I've ever seen," Bired recalled. "And you know, he goes on - Yeah, yeah, whatever. Then once he sees Magic play, he came back and says, 'You're right. He is better than you!"

For the next 15 years they were obsessed with each other . . . not just during the three times the Lakers and Celtics squared off for the NBA championship, but even during summer workouts when they were supposed to be taking it easy.

"That can make you hate a guy!" Axelrod said.

"Well, I was wanting to hate him. That was in my mind. He was the enemy."

"The ultimate respect that Larry Bird got, especially in the Black community, was like, 'I don't care if he's white or not, that guy can sure play basketball,' Johnson laughed. "And so, you know, you're sitting in the barbershop and people are talking about 'Larry Bird,' 'Larry Bird,' 'Larry Bird.' So, I'm sitting there like, 'Hurry up and cut my hair, I gotta get into the gym,' you know? It was driving me crazy!

"He made me always watch my game and evaluate it to his standards, not to just my own standards," Johnson said. "But I'm saying, 'What would Larry do? How many shots has Larry taken?' You know? So, I'm always watchin' his stat line. 'What did Larry do last night?' So, no matter what, I was always watching Larry Bird."

Mutual respect may have been pushing them to the top of their games. But friendship? That was out of the question.

Bird said it was a good thing there was no personal relationship between them on the basketball court. "You keep the competitive edge," he explained.

"Well, that's what really fueled him and motivated him," Johnson said. "And then I had to say, 'I don't want to get to know him, either,' because we didn't want to like each other."

That's the way it stayed . . . until 1984, when Converse, the sneaker company, paid big bucks to get both men to film a commercial at Larry Bird's home outside French Lick.

Typically they exchanged few words during the morning shoot. Then they broke for lunch . . . 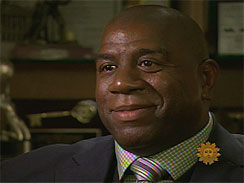 (CBS)
"Yeah, we talked, we talked quite a bit that day," Bird said. "And it wasn't about basketball. It was about, you know, how he grew up, about his family, and just wasn't about the NBA."

"And we didn't want to leave," Johnson said. "It was like an hour, hour-and-a-half break. We talked about everything from us growing up poor, and how we grew up. And it was just on and on and on. The rest of the commercial, they couldn't get us to stop talking."

The ice may have started to melt during Magic Johnson's trip to Bird's home to film the commercial. But there was no way these two men were going to be able to go any deeper into their relationship - at least not then, while they were still playing.

"It could have happened a lot earlier, if I let it," Bird said. "I knew that. But I closed the door."

They played against each other for seven more seasons, until one day in 1991, their days as rivals came to a stunning end.

Magic Johnson called a news conference to announce he had HIV. He was retiring.

"And when I announced HIV, the first call I got was Larry Bird. First call. You know? He's crying and just, you know, checking on me, you know? And after all we've been through, you know? All the battles, and all the wars. And here he's taking the time to just say, 'Man, I love you. I care about you. I hope everything's all right. What can I do to help you?'"

The games were over. Something real and lasting was emerging in their place.

Bird said when he hung up the phone from that call he couldn't sleep: "'Cause at that time, you thought it was a death sentence. Eight, seven, eight years, you're dead."

Johnson offered that Bird was there for him "from day one."

The next summer Johnson came out of retirement to join Bird on the Dream Team that won a gold medal at the 1992 Olympics. There they discovered the same passion that had driven them apart . . . now bound them tightly together. 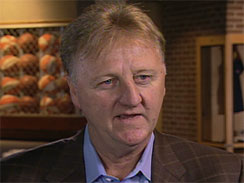 (CBS)
"The one thing, though, I know is, if I ever had problems with my son, with my marriage, anything, if I call him he will be there, and vice versa," Bird said.

"Yes," Bird said, "in a heartbeat, drop everything and do what you gotta do to help."

"In life you don't get but so many people that you know would be there in the middle of the night," Axelrod said.

Johnson's reaction: "Wow. He - he's gonna make me start crying in a second here. He shouldn't have said that. Oh boy."

"So, how did you get there?" Axelrod asked.

"Wow, I don't know. When somebody you know puts in the time like you. And also got a big heart like you have."

Their playing days over, both men have found success off the court as well.

They've collaborated on a new book about their 30 years together, "When the Game Was Ours" (Houghton Mifflin), the story of how the competitive fires that stoked them to NBA championships and gold medals needed to be tamped down before they could bask in the warmth of real friendship.

"We had similar backgrounds," said Bird. "We both worked hard, and just our love of the game, I always said if we grew up in the same towns and we played basketball, we'd have been best friends."

"We may not talk for two, three months, but boy, we get on that phone, we just continue on and on and on and on," Johnson said. "That's what makes it beautiful, that we don't have to talk every day. But he knows I got him. And I know he's got me."