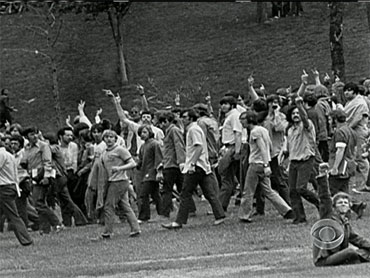 The area at Kent State University where four students were killed by National Guard troops has been made a national historic site in time for the 40th anniversary of the shootings.

It was on May 4, 1970 that Guard members opened fire on a student protest of the Vietnam War at the northeast Ohio school. Nine people were wounded.

Alan Canfora was one of the nine students wounded that day - his defiance captured by a student photographer moments before guardsmen pulled their triggers.

"I hid behind a tree and a bullet pierced my wrist. Those were some dark memories I have," he said.

On May 4, about 2,000 students gathered near the Victory Bell.

"We were tear-gassed and they chased us up over the hill," Canfora recalled. "About 12 men stopped turned and raised their weapons and they all began to shoot."

The shooting lasted 13 seconds; in total 67 bullets were fired. Ronald Snyder's unit was not involved in the shooting.

"I know what happened and it was murder," Canfora told Mitchell.

Four decades later Kent State has changed. Daffodils for fallen soldiers in Vietnam now bloom. The tragic scene is a historic site and the university is creating a visiting center and walking tour narrated by civil rights activist Julian Bond.

On Monday, people holding candles took turns all night marking the spots where the students died. At 12:24 p.m. Tuesday - 40 years to the moment when Guard members fired - a bell was to be rung 13 times in memory of all the students who were shot.