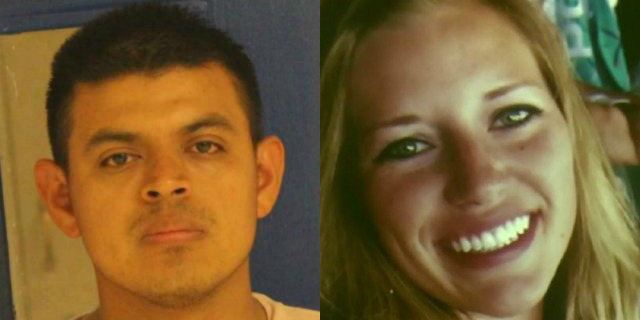 BEND, Ore. -- Police say an Oregon college security guard charged with murdering a missing woman fled to California where he carjacked a family at gunpoint, shot a man at a motel and led officers on a high-speed chase before his arrest.

Edwin Lara, 31, allegedly went on the crime spree after being implicated Monday in the disappearance of a 23-year-old Kaylee Sawyer, of Bend, Oregon. He was charged with murder Tuesday in Sawyer's death.

Police in Bend revealed that Lara's wife had alerted authorities Monday of his possible involvement in Sawyer's disappearance. Sawyer was last seen around 1 a.m. Sunday near her apartment, located close to the college where Lara worked. Her boyfriend told the station she had been out with friends for a bachelorette party when she vanished.

Isabel Ponce-Lara, Lara's wife, was recently hired by the Bend Police Department and has been receiving field training, the department said on Tuesday.

According to newly released court documents obtained by CBS affiliate KOIN, Ponce-Lara cried as she told police her husband was acting strangely when he came home Sunday from his security job at Central Oregon Community College. She said her husband told her he was driving a campus security vehicle near the college when he hit a woman with his car who walked out in front of him in the dark. Police say the woman was Sawyer, and that Lara told his wife he panicked and disposed of the body.

Ponce-Lara said she didn't know where her husband put the body, but that he told her some of Sawyer's belongings were inside a shed at their home, reports the station.

Bend Police Chief Jim Porter said investigators have found a body believe to be Sawyer's. He wouldn't say where it was found. A medical examiner would confirm the identity, he said.

The mayhem in the former gold-mining town of Yreka started near dawn when a man was shot in the stomach at the Super 8 Motel. The man, who has not been identified, was hospitalized in critical condition, police said. Police tell KOIN they believe Lara was behind the shooting.

Five minutes after police got the call about the shooting, another man phoned in from a gas station, saying his car had been taken with his wife and two sons still inside.

"The man had come out of the gas station to see his dog running around and his car gone," Yreka Police Chief Brian Bowles told The Associated Press.

Bowles said Lara forced one of the man's sons to drive at gunpoint. The mother and sons were later dropped off at a rest stop.

A California Highway Patrol Officer later saw a car speeding on the interstate about 100 miles away and tried to pull it over, the highway patrol said in a statement. Lara sped away at more than 100 mph. Police from the nearby town of Corning joined in before Lara pulled over and was arrested. A 19-year-old Salem, Oregon woman, Aundreah Elizabeth Maes, was also in the car and was arrested, Yreka police said.

Lara and Maes were booked into jail on charges including attempted murder, kidnapping, carjacking and burglary, Yreka's police department said in a statement. But charges against Maes were dropped after police determined she was a victim, reports CBS affiliate KOIN. The woman's family told the station that Lara had kidnapped her.

"We have got crime scenes at a motel, a gas station and in Red Bluff more than 100 miles away," Bowles said. "We're a small department and stretched beyond our resources right now."

Later Tuesday, Lara was charged in Bend, Oregon, with one count of murder in the killing of Sawyer, Deschutes County District Attorney John Hummel told a news conference.

"We're cooperating with the police as best we can," Paradis said, declining to comment further.