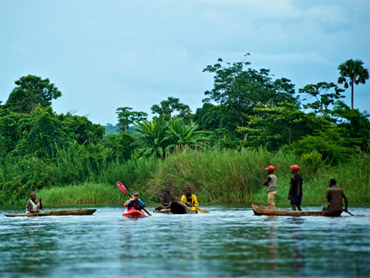 For weeks, three kayakers exploring a series of rivers through the heart of Africa came together in a close formation designed to ward off hippo and crocodile attacks whenever they paddled the quiet green glides between thundering stretches of whitewater.

The boaters - two Americans and a South African - traveled some 1,000 miles of river this way, through some of the densest concentrations of man-killing wildlife in the world. They were on a quiet stretch of the Lukuga River in Congo, paddling just 4 or 5 feet apart, when a crocodile slipped up from behind and ripped trip leader Hendri Coetzee from his red plastic boat.

With no time to do anything but say "Oh, my God!" Coetzee was gone, hauled beneath the green water never to be seen again.

"The crocodile just pulled him right underwater," Chris Korbulic told The Associated Press in a telephone interview Tuesday from Reno, Nev., where he was visiting his brother. "I think we both were just in complete shock and disbelief, and absolutely horrified at what had just happened."

Ben Stookesberry, 32, of Mount Shasta, Calif., and Korbulic, 24, of Rogue River, Ore., are world-class kayakers who have gone where no boat has gone before to navigate the melting snows of the Himalayas in Northern Pakistan and India, towering waterfalls in Brazil, and boulder-stewn creeks in Costa Rica, California and British Columbia.

With primary sponsorship from Eddie Bauer Inc.'s First Ascent line of outdoor gear, they had partnered with Coetzee, a top whitewater guide based in Uganda, to document the whitewater of the White Nile and Congo, and be the first to boat the whitewater of the Lukuga River. They also hoped to bring attention to the crisis of millions of people dying from poor water quality in a region overflowing with water.

Though they knew Coetzee's giant reputation in the tiny world of extreme kayaking, and spent months planning their expedition together, Korbulic and Stookesberry didn't meet Coetzee until they flew into Entebbe, Uganda, in October. From his base in Jinja, he started showing them the ropes of African kayaking.

"He wanted to take us from the snowcapped peaks into the deepest, darkest, steamiest jungle," said Stookesberry. "He wanted to prove to us that in this place considered by Western media as one of the most dangerous places on Earth, we would find some of the nicest, most hospitable people we ever met."

For two days Coetzee took them down the Murchison Falls section of the White Nile. He taught them to tap their boats to make noise, stay out of the eddies where hippos might attack them, and keep clear of the banks where crocodiles sunned themselves.

Stookesberry and Korbulic were used to whitewater that could kill them, but the idea that something unseen and alive in the water could kill or eat them was new.

By the time they got to the Lukuga, they were comfortable with their skills.

The day Coetzee was attacked - Dec. 7 - they saw three little crocodiles on the water, just 3 feet long. It had been raining for two days, so hard they didn't try to cook a meal. They had just finished more than 30 miles of whitewater. And they faced 200 miles of flat water, winding through rolling elephant grass-covered hills, before their final takeout.

They were in the middle of a stretch about 100 feet wide, paddling so close their blades would touch if they got out of synch. Coetzee was in the center, Stookesberry a little in front on the left, and Korbulic a little behind on the right.

"I glanced over to measure that we were not paddling towards or away from each other. And just in my periphery I saw the crocodile come out of the water, and he got onto Hendri's left side - just the left shoulder with its mouth," Korbulic said.

Talking to villagers later, they figured the crocodile was at least 15 feet long and weighed up to 2 tons.

Stookesberry and Korbulic watched the overturned boat shaking for about 20 seconds as the crocodile pulled Coetzee from the tight-fitting cockpit. Realizing they could do nothing, they paddled as fast as they could less than a mile downstream to a village, where they caught Coetzee's boat as it floated by, without even a scratch to tell how he had disappeared.

Coetzee's body has never been found, and he is presumed dead.

Appearing first on NBC's "Today" show, Stookesberry and Korbulic said they will never again paddle the Lukuga, out of respect for Coetzee.

"His goal was never to gain that notoriety," Korbulic told the AP. "He was just really loving how he was living his life - and the adventure it was taking him on."