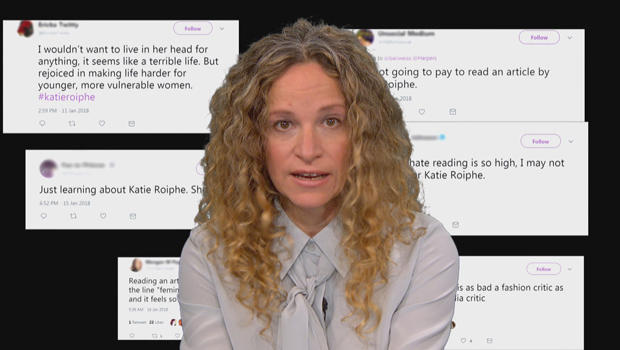 An article published online today is already bringing heated criticism down on the head of its author, Kaitie Roiphe:

A few months ago Harpers magazine asked me to write a piece on the #MeToo movement. I'm a feminist writer and professor who has disagreed with other feminists in the past. Usually, people wait to read what I have to write before getting angry over them. Not this time.

Before the magazine article had even been published, thousands of people took to Twitter, furious at me for rumors about what might be in the piece. Total strangers called me "a garbage person," "a ghoul," "human scum." They threatened that my career was over and said obscene things not fit for Sunday morning, or any morning. My children, of course, were reading and hearing all of this.

What was my crime? Having doubts about the excesses of #MeToo, even as I shared its goals? Departing slightly from the officially-accepted feminist position?

What happened to speaking my truth?  It felt like there was a mob with torches outside the window.

In his novel "1984," George Orwell created a phrase for my accusers: "Thought police."

If we as a culture are going to sort through the very tangled question of what constitutes an abuse of male power, we need to be able to hear -- really hear -- lots of different opinions.

Is asking a woman for her phone number an abuse of power? Does the distinction between sleazy behavior and a criminal act matter? Is it OK to try people in the press?  Lots of good and reasonable people will disagree about the answers to these questions.

If we want a true reckoning, it means listening to authentically conflicting points of view, from both women AND men.

Anyone whose feminist activism consists largely of hurling abuse at other women might want to take a look in the mirror. If we are calling other women "human scum" because they have ideas or politics that are different from ours, are we any different from Trump supporters tweeting "lock her up" at Hillary Clinton? With their politics of personal destruction -- the hate and nastiness and name-calling -- are these Twitter feminists any less bullying than the people we say we oppose?

Isn't silencing women what we are fighting against?